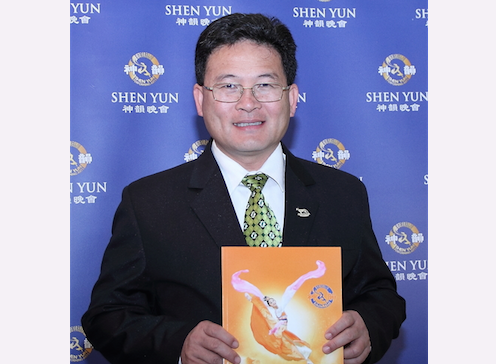 TAICHUNG, Taiwan—Shen Yun Performing Arts International Company staged its first performance in Taichung City, at the Zhongshan Hall, on the afternoon of March 12. Attending was Changhua City Mayor Qiujian Fu, who said that he was determined to see the Shen Yun as he had missed it many times in the past.

After watching Shen Yun Performing Arts International Company, the city mayor categorized what he felt about Shen Yun in four areas: First, each Shen Yun dancer’s skills are superb: Second, the application of dynamic three-dimensional backdrops synchronized with dances is very impressive: Third, the live orchestra composed of Chinese and Western music (instruments) let the audience enjoy the essence of the Chinese and Western music: Fourth, the choreography of all the programs is perfect, as it is a comprehensive dance system composed of dances from various places across China.

“So it’s a perfect combination.”

Under Mayor Fu’s leadership, Changhua City government has committed to music education. He said that Shen Yun Performing Arts’ ways of performance, choreography, etc., are well worth learning by dance companies and orchestras in the City.

He took the program The Monkey King Thwarts the Evil Toad for example, and said that not only is it very interesting, but the backdrops were also very fantastic. He added that Shen Yun dancers’ skills are at the highest level. The outstanding performance, coupled with the animated digital backdrops, made the performance become something beyond the audience’s imagination.

Speaking of Shen Yun’s animated backdrops, Qiujian Fu praised the scenes, he said that not only did he feel like being in the scene in person, but he was also amazed by the top-level dancing performances. Praising the performances, he noted, “It’s indeed fantastic.”

In addition, the Mayor opened his arms, and expressed that he sincerely welcomed Shen Yun Performing Arts International Company to Changhua City, and that it’s a great pity that Shen Yun is banned by in mainland China.

‘It’s great to spread the spirit of compassion’

After watching Shen Yun’s 2014 premiere in Taichung City at the Zhongshan Hall, on March 12, Mr. Sung Peng-Chi, the chairman of the Gaowei Construction, shared his feelings.

He said, “Throughout the whole process, it (Shen Yun) integrated the Chinese history and culture with its arts. Every program is full of artistic elements of the Chinese ethnic and folk Dance. The audience can feel Shun Yun’s connotations and spirituality.”

Established in 2006 by a group of overseas artists, Shen Yun has set out on a mission to revive 5,000 years of civilization, in particular the spirituality that was part of China’s divinely inspired culture.

Shen Yun uses classical Chinese dance to combine music, costumes and Hi-tech dynamic backdrops together and creates a perfect show, which offers the audience in Taichung a feast for their eyes. It also impressed Mr. Lin, the chairman of Wise Technology Corp. and Zhida Guest House, and his wife deeply.

It was the first time for Mr. Lin to experience Shen Yun, and Shen Yun’s demonstration of a perfect combination of the classical Chinese dance and dynamic backdrops made him feel Shen Yun “is a very unique performance” and “really rare.”

In addition, Shen Yun coordinates the classical Chinese dance with the Chinese ethnic and folk dance, illustrating the profound connotation of the 5,000 years of Chinese culture. From ancient myths and legends of various dynasties, to the contemporary stories, Shen Yun leads the audience to enjoy the different folk customs in China. Mr. Lin said, “It gives the audience a really unique feeling. That’s why it impressed me deeply.”

Mr. Lin felt that Shen Yun illustrates the authentic Chinese culture in the form of arts. It is “well organized and structured, so it allows people to know the features of our Chinese dynasties, and this way of presentation is very insightful.”