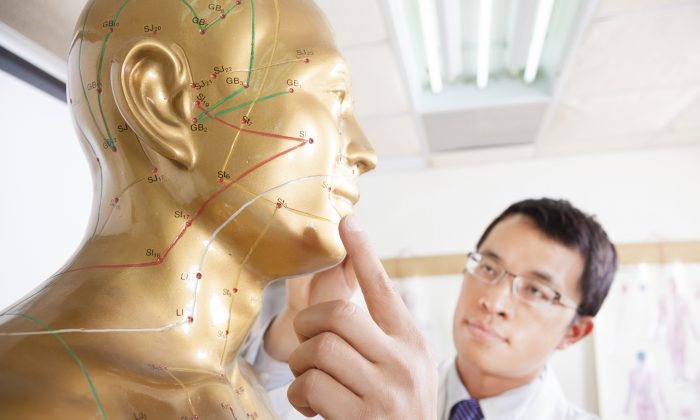 A woman’s fertility peaks in her 20s, but the timing of life doesn’t always cooperate with family planning. Today, many couples aren’t ready to bring a child into the picture until after the woman turns 35—when the chances of getting pregnant begin to fall and the likelihood of miscarriage rises.

Just a few decades ago, couples who were unable to conceive had few options outside of adoption.

Today, more than 5 million babies have been born through IVF, but the procedure comes at a high price. A single cycle can range from around $12,000 to $15,000 and is not usually covered by insurance. It can also be hard on the body of the hopeful mom-to-be. And it’s not a sure thing.

If couples are willing to take a slightly slower road, they may have a better outcome.

But researchers have discovered that IVF can get a boost from Chinese medicine. In the early 2000s, several studies showed that the addition of acupuncture can substantially increase the success rate of IVF patients. Since then, a growing number of women have included acupuncture and other aspects of Chinese medicine into their IVF protocol.

But Jeanie Lee Bussell, Ph.D., an acupuncturist who has treated many patients going through IVF, says acupuncture and Chinese medicine should be considered as a first option.

“I would like to see couples utilize Chinese medicine to boost fertile potential before they start with IVF,” she said. Bussell focuses on women’s health and fertility, and is co-author of “Fully Fertile: A 12-Week Holistic Plan for Optimal Fertility.”

Even while most fertile, women typically ovulate only one egg per month, and it only stays viable for 12 to 24 hours.

Under IVF, a woman’s body is made to ovulate multiple eggs in a single cycle. This increases the odds of fertilization, but requires a strong cocktail of drugs to pull it off: antibiotics, birth control pills, daily injections of gonadotropin and other hormonal injections to get the timing just right, and, if need be, something to treat stress.

“This is very unnatural,” Bussell said. “Women don’t go through the IVF because they want to. It’s because they feel like this is the only option they have available to them.”

One enticing aspect of IVF is that the results can be quick, which can mean a lot for a woman already passed her prime fertility. But Bussell says if couples are willing to take a slightly slower road, they may have a better outcome.

“In Chinese medicine, the way we like to approach it is for couples to be in optimal health even before they try,” Bussell said. “Because it’s not a question of being able to conceive, it’s how to have a healthy child.”

In many cases, doctors can’t identify why a woman can’t get pregnant—these are the best candidates for Chinese medicine.

In many cases, doctors can’t identify why a woman can’t get pregnant—and these cases are the best candidates for Chinese medicine. However, some patients need immediate attention from a fertility specialist. To see what category you belong to, Bussell recommends getting a fertility check-up, a service offered by most fertility clinics for between $100 and $400. This will identify anatomical obstacles to pregnancy that acupuncture alone would not be able to fix.

Acupuncture’s anecdotal success stories have prompted researchers to take a closer look at how the treatment works. In 2003, physicians at Weill Cornell medical center published an article in the journal Fertility and Sterility evaluating these researchers’ findings. One showed that acupuncture increased blood flow to the uterus and therefore increased uterine wall thickness, an important marker for fertility.

Other studies found that acupuncture reduced the level of stress hormones responsible for infertility, influenced the level of fertility hormones in plasma, normalized the function of the hypothalamic-pituitary-ovarian axis, and increased the production of endorphins—all conditions wanted for a healthy pregnancy.

You can think of the difference between IVF and Chinese medicine as one of quantity versus quality. IVF is fundamentally a numbers game—more eggs are available so the odds go up—whereas Chinese medicine seeks something more holistic. IVF focuses mainly on the uterus and ovaries, while Chinese medicine focuses on the whole body, as well as the mind and spirit. The idea is that if the woman is in balance, she’s more likely to support a healthy pregnancy.

“In Chinese medicine, there is no differentiation between the emotional or spiritual body and the physical body,” Bussell said. “If the patient has a lot of emotional issues, this will cause physical manifestations, as well as physical discomforts will have an impact on the psychological aspect.”

Acupuncture and herbs are tools used to bring about a better balance in the body, but Bussell emphasizes that the basics of health—eating a healthy diet, managing stress, and getting enough sleep—are the foundation that support a couple’s fertile potential.

“Night is the yin time. And in order to have a good balance, you need a good yin to create the good yang and vice versa. We spend a lot of our life sleeping because we need that resting time,” she said.

Men also play a key, yet often overlooked, role in pregnancy. Approximately one third of the time, a couple’s failure to conceive lies with male fertility issues (another third are linked to issues with the woman’s fertility and the final third are issues with the couple together). Chinese medicine can help men too.

“Unless the men have no sperm, Chinese medicine can make improvements,” Bussell said. “He may need acupuncture and herbal remedies, along with diet and lifestyle modification, to help support the recuperation. This will all depend on his individual constitution.”

Acupuncture is even less likely than IVF to be covered by insurance. But for those paying out of pocket, the cost of Chinese medicine is considerably lower than IVF. An individual session can range from $50 to $150. The number of treatments depends on the issues the couple presents and their fertility goals.

Bussell says the internet and social media have helped spread awareness about Chinese medicine as an option for fertility. But her real hope is for medical doctors to recommend it more often to patients who might prefer something more holistic.