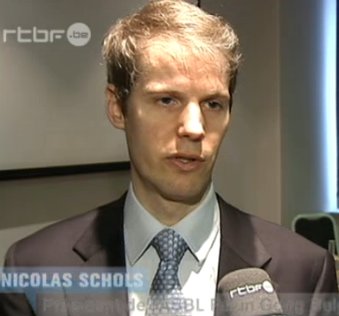 Nicolas Schols, president of the Belgium Falun Gong Association which is sponsoring six performances by the Shen Yun Performing Arts at the Theatre National in Brussels. He had to intervene when two men from the hotel where Xi Jinping is staying began to remove a Shen Yun promotion banner. (Screenshot/ RTBF)
Shen Yun

The Chinese Communist Party (CCP) applied considerable pressure to remove banners advertising a classical Chinese dance performance from the streets of Brussels, Belgium, during the weekend.

The banners promote Shen Yun Performing Arts, a New York-based company dedicated to the revival of traditional Chinese culture, which will be performing from April 2-6 at the Theatre National in Brussels.

On Friday, March 28, two men from the prestigious Sheraton Hotel in the center of Brussels, began using a ladder and clippers to unpin a three meter Shen Yun banner from a lamppost outside the building.

Xi Jinping, the head of the CCP, is visiting Brussels for two days from March 30 on the final leg of his week-long European tour. He is staying for two nights at the Sheraton Hotel and the three meter high Shen Yun banner is five meters from the front door of the hotel.

Around a picture of a leaping female dancer in traditional Chinese costume with long flowing sleeves, the banner proclaims “5,000 years of Civilization. Shen Yun. All-new 2014 Show. Live Orchestra.” The poster also has the dates, venue, and ticket buying information.

“The CCP has put pressure on the theatre, asking for a cancelation of the Shen Yun show,” said a member of the Shen Yun promotion team. “It also asked the advertising agency and police from different districts to take down all posters, and claimed it would keep open the option of legal action.”

The adverts are fixed in public places paid for by the company and sanctioned by the city of Brussels. Posters are displayed on pillars at random. Locations cannot be selected by the advertiser.

After the CCP’s request to have all advertising for Shen Yun removed from the city, the Mayor, Yvan Mayeur of the Socialist Party, published an announcement that the posters should not be taken down.

So it was a shock for Nicolas Schols, President of the Belgium Falun Gong Association which is hosting the show, to be told by a journalist that someone on a ladder was doing exactly that.

On Friday, Mr Schols was shown on the French speaking, prime time evening news programme of the Belgium national television station RTBF questioning two men as to what authority they had to touch the poster as it was part of a commercial contract. The head of hotel security was called and the men were directed to take down the ladder and return to the Sheraton Hotel.

“Shen Yun is rejuvenating interest in the 5,000 year history of China. It is a history steeped in the relationship of humans to the heavens and mankind to the divine,” a representative of Falun Gong said.

“Although the CCP has dropped all notion of the redistribution of wealth, opposition to capitalism, seeing art as a public unifier, and viewing religion as a social opiate, it has been unable to release itself from the grip of power for its own sake. It has a belief in immediate self-preservation in a godless state.”

The Shen Yun website puts it like this: “Forcing atheism upon society, the Chinese Communist Party has launched various campaigns—most notably the Cultural Revolution—to destroy not only cultural sites , temples, and relics, but also the Chinese people’s belief in virtue and faith in the divine.”

The largest manifestation of this is the CCP’s persecution of Falun Gong.

“Falun Gong is an ancient qigong practice brought to the public by Li Hongzhi in 1992. It involves doing meditative exercises and living according to the principles truthfulness, compassion, and tolerance,” said the Falun Gong representative .

“The practice grew very rapidly, with more people practicing Falun Gong than were members of the CCP. In July 1999, the then-head of the Party, Jiang Zemin, began a campaign to eradicate the practice.

“That campaign is still ongoing. At any one time, hundreds of thousands of practitioners are detained, where they suffer torture and brainwashing. According to the Falun Dafa Information Center, thousands have died from torture and abuse. Independent investigators believe that tens of thousands have been murdered by having their organs removed for sale.”

Mr Xi arrived in Belgium on Sunday and, with the country’s King Philippe and his wife, visited the Chinese pandas in Pairi Daiza Zoo. The Pandas are called Chinese not only because their original habitat is in China but also because pandas are loaned to, not owned by, the countries they live in. Usually there are trade deals or other agreements beneficial to the country which homes the pandas.

On Monday Xi and his large entourage will visit the European Union (EU)—the European Parliament—headquarters about two kilometers from the hotel. There is no plenary session of the EU until Wednesday, April 2, but Xi and members of his group will talk with EU leaders, officials, and interested parties.

He flies back to China on April 1.

The Shen Yun promotion team is staying vigilant. “There are many persons taking orders from the CCP, walking around us and trying to overhear what we say and watching us,” one of them said. “Cars from the Chinese embassy just park in front of the hotel … they walk around us and watch us.”

The team has taken photos of these stalkers and say they will watch and safeguard the banner round the clock. 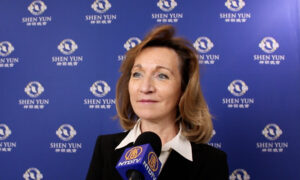 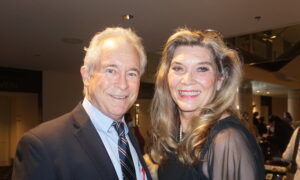 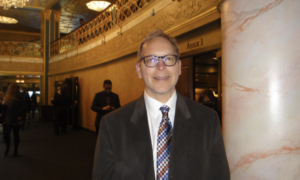 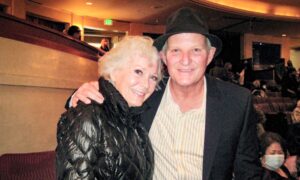 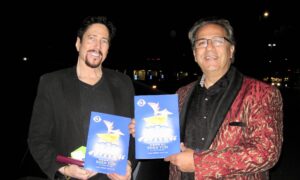 Audience CommentsBy Damian Robin
Escondido Audience Member: ‘If You Want to See the Best, You Want to Come to Shen Yun’
03-31-2014
sharecomments