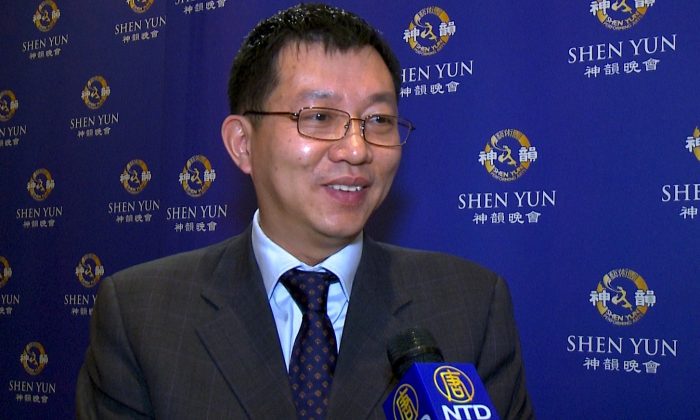 Mr. Wang, a Chinese commentator, left China a little over two years ago. Since then, he has attended four Shen Yun performances.

“It’s is something to be waited earnestly for each year,” he said.

The performance at Lincoln Center on the evening of Jan. 17 was the second one he had attended this year.

“It hasn’t been long since we left mainland China,” Mr. Wang said. “But I can already sense that a lot of [other] Chinese performing arts are mental garbage.”

Mr. Wang said that modern Chinese cultural performances lack depth, and that such performances are a hodgepodge of arbitrary things such as karaoke.

But, Shen Yun is different.

It was formed in 2006 by leading Chinese artists who founded the company in New York. Their mission is to revive traditional Chinese culture, something that is nearly lost in China today.

“Other Chinese performances contain too much of an aggressive feeling, that stuff has filled and numbed all of mainland Chinese people’s minds,” Mr. Wang said.

“After you leave China, come to the U.S, and watch Shen Yun, you become clear of what is garbage,” he said. “You discover the pure culture of the ethnic groups—which is pure as well as natural.”

Shen Yun performs ethnic and folk dances, celebrating China’s vast and varied ethnic groups such as the Manchurian, Mongolian, and Miao. The Miao women are known for their rich adornment of of silver headdresses, necklaces, and bracelets. Before the Qin Dynasty, the Miao lived near the middle reaches of the Yangtze River.

The distinct lifestyles and subcultures of the ethnic groups are a result from their local topography, climate, and religious traditions.

Mr. Wang recalls the first time he saw a Shen Yun performance. It was January 2012. He had bought a ticket for a seat right in the center of the first row. He distinctly remembers the people next to him feeling the emotion of the performance and crying.

“The audience was very emotional and excited,” he recalled.

Each Shen Yun dance is accompanied by an orchestra that plays original composition.

The Shen Yun Symphony Orchestra began touring on its own in 2012, and last year, Mr. Wang attended the concert at Carnegie Hall.

In Shen Yun, classical Chinese dancers share a stage with an advanced, interactive digital backdrop that transports the audience from places such as the snowy cusps of Tibetan mountains to the golden pavilions of the Tang Dynasty.

“Sitting here today, the people sitting next to my wife and I, was a white person and an African-American person,” he said. “They were very into the show.”

“Westerners like to hear symphonic concerts, watch ballet,” he said. “Shen Yun will become something that connects Westerners and Chinese.”

“The Chinese people will also one day develop the tradition of seeing Shen Yun,” Mr. Wang said. “Shen Yun is something that Westerners and the Chinese can have in common in spirit.”