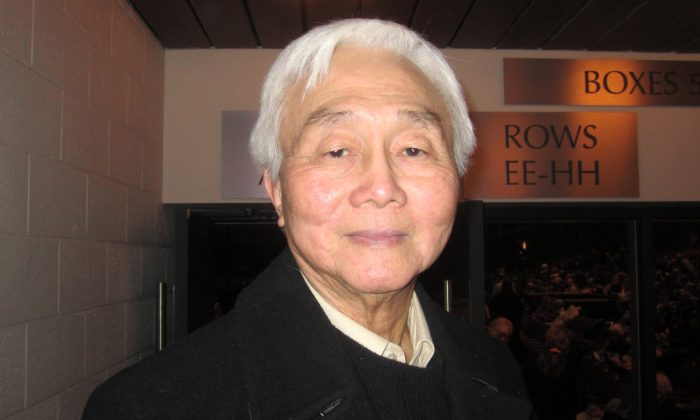 Professor Emeritus Seimer Tsang was happy to finally get the chance to watch Shen Yun Performing Arts at Centre in the Square, on Jan. 14, 2014. (Lisa Ou/Epoch Times)

KITCHENER-WATERLOO, Canada—For Professor Emeritus Seimer Tsang, the experience of seeing Shen Yun Performing Arts at Centre in the Square on Tuesday night gave him the opportunity to reconnect with his Chinese heritage.

“It’s fantastic,” said Mr. Tsang, who had the chance to see the production for the first time after hearing about it for several years.

New York-based Shen Yun was established in 2006 by a group of leading overseas Chinese artists with the mission of reviving 5,000 years of divinely inspired culture.

Mr. Tsang was particularly impressed by Shen Yun’s works of classical Chinese dance, one of the most comprehensive dance systems in the world and one of the main ways in which Chinese culture was passed down throughout the ages.

A Professor Emeritus of Mechanical Engineering at Lakehead University, Mr. Tsang immigrated to Canada in 1960, shortly before the start of the Cultural Revolution (1966-76), which destroyed many of China’s cultural treasures and traditional values that Shen Yun is now reviving on stage.

In 1977, he went on to teach in Lakehead University’s Department of Mechanical Engineering, where has also served as department chair for over 12 years.

Involved in several university committees, as well as professional and community organizations, Mr. Tsang was also the chair of the Lakehead Chapter of Professional Engineers Ontario.

He added the performance was good for children, and that he would bring his own grandchildren.

With reporting by Lisa Ou and Madalina Hubert