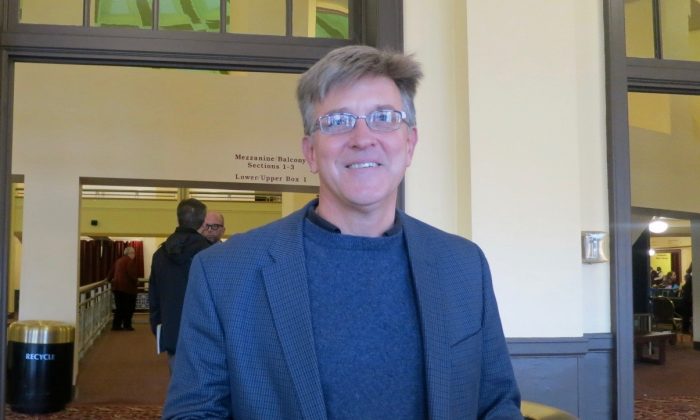 MILWAUKEE—Sean McCollum likens himself to being a bright-eyed student, digging into topics from Stalin to volcanos to write nonfiction books and articles for children, tweens, and teens.

So imagine his delight when the stories of China, with topics like the playful Monkey King from “Journey to the West” or the ruffians of the Cultural Revolution, came to life with comedy and drama through Shen Yun Performing Arts.

This event was a gift, said Mr. McCollum outside the Milwaukee Theatre on Feb. 20, something his parents thought he would enjoy as he hadn’t been to the theater in a while.

“I just feel happy, happy and also sort of peaceful,” Mr. McCollum said. “It was delightful, wonderful multimedia mix of both dance, music and audio visual stuff on the backend.”

The stories are told through classical Chinese dance, a form thousands of years old, with the aid of an animated backdrop and orchestra blending East and West.

“I thought the storytelling was delightful,” the writer said. He enjoyed seeing the ancient, ancient myths, classic stories, as well as folklore, and then even stories from the modern day.

The performance not only satisfied his curiosity and love of learning, but was a visual experience that made him feel at peace—like a moment in the performance where the dancers created water on stage with blue, flowing fans.

“It was just gorgeous,” he said.

It is Shen Yun’s mission to revive traditional Chinese culture, which Mr. McCollum is somewhat familiar with, having lived in Taiwan for a period. “I find it a such a rich culture in such a variety of ways, and I feel like we Westerners only get to scratch the surface of it, you can only see a little of it.”

“This is a big effort and successful effort to make people be a little more aware of the amazing culture,” he said.