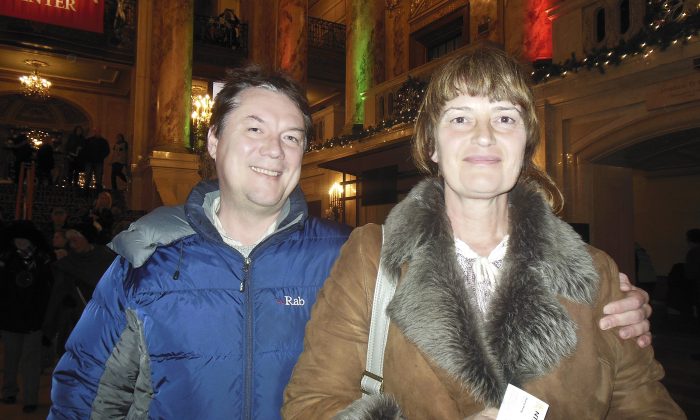 Vadim Alexandrov and Elena Gelegina, a landscape designer, enjoyed watching Shen Yun at Boch Center Wang Theatre in Boston on Dec. 28, 2017. Elena Gelegina said the performance was very inspiring, and she got the message from the performance about how one should always have hope and never give up. (Sherry Dong/The Epoch Times)

“I have never seen anything like this before. I practice martial arts, taekwondo, and karachi, but I have never seen anything else performing as what I have seen in the show. That was totally exquisite … something which is beyond normal people’s ability to perform … the entire [audience] was totally excited, extolled … everybody felt something special, something coming from the Lord, from the higher beings, something coming from the Creator. So [Shen Yun] made the [audience] feel that.”

“I saw the audience in front of me, who was turning like this and I saw some tears. And so that that was definitely a great performance. Something I will remember for the rest of the days.”

“It was performed so beautifully that I was quite amazed … Every part of the show was a little bit different, different in a special way, that you cannot really pinpoint, well, this is better than that. So every single is equally good, equally excellent .. and it was no moment where you can say, oh, this person has faulted or something. So it was perfect to very last second. So, yes, we enjoyed it so very much.”