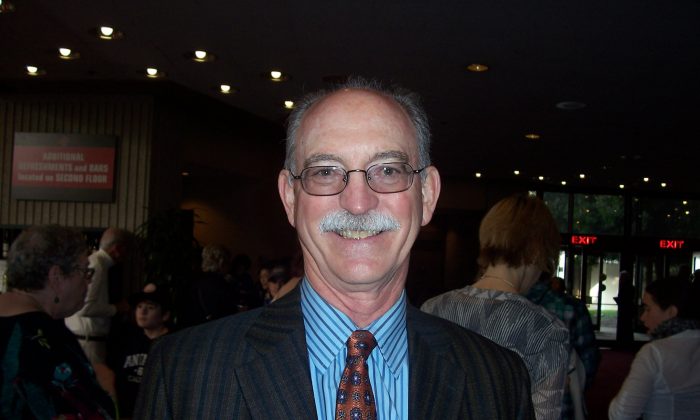 Judge Drozd attended the nearly sold out performance of Shen Yun at the Community Theater in the historic downtown. (Gary Wang/Epoch Times)

The state capital is filled with dignitaries and luminaries alike, many with a penchant for the arts, eager to experience the magic of Shen Yun.

One such distinguished guest was chief magistrate judge of the United States District Court for the Eastern District of California, Dale A. Drozd. Judge Drozd attended the nearly sold out performance of Shen Yun at the Community Theater in the historic downtown.

“I was very interested in seeing this show. I’d seen it advertised and wanted to come,” he said. Luckily Judge Drozd’s wife had the same wish.

Not knowing what to expect when he initially step foot in the grand auditorium, Judge Drozd left captivated by a new and unfamiliar art form—classical Chinese dance.

Shen Yun performing arts has been introducing Chinese classical dance to a whole new generation of art enthusiasts throughout the world who may never have had the fortune of seeing this 5,000-year-old ancient art form live on stage.

The judge also appreciated the mixture of dances from China’s multitude ethnic groups. “China is a huge country, so obviously there’s many different regions of ethnic representation and each of the dances is different.”

“China has 55 officially recognized ethnic minorities, and their distinct ways of life reflect discrepancies in local topography, climate, and religious tradition. It is no surprise that these factors are also deeply embedded into each ethnicity’s dance style,” explains the Shen Yun website.

“Each of the different ethnic groups’ dances are completely different from one another and that’s interesting,” Judge Drozd said. “I just think it’s quite beautiful.”

Jody Barbuta, artist, sculptor and former professor of art at the University of California, Berkeley, had her own deeply personal reflections on Shen Yun.

“I thought it was beautiful. It’s like painting with the human form,” she said.

The message that good ultimately overcomes evil was especially powerful and in line with the artist’s own values.

“I definitely like the focus on goodwill, always persevere, and that good will ultimately triumph, even though there are disappointments and hardships in life.”

The dance titled The Power of Compassion particularly resonated with the artist because she felt it exemplified the ideal of “always showing kindness despite how others may treat us.” Ms. Barbuta hopes to instill these values in her own children.