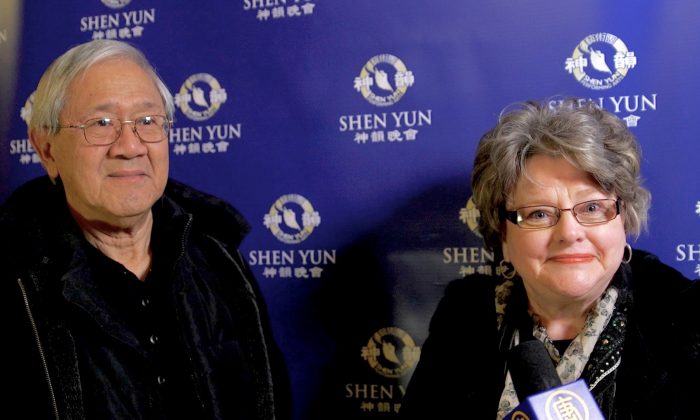 Mr. Wing Loo and his wife Yvonne, after Shen Yun Performing Arts, on Jan. 12, 2016, left them feeling adamant that everyone needs to see this performance. (Courtesy of NTD Television)

KNOXVILLE, Tenn.—”Everybody should come and see the show and maybe our world will change for the better,” Mr. Wing Loo said emphatically after seeing Shen Yun Performing Arts, a classical Chinese dance and music company, at the Tennessee Theatre in Knoxville.

The chemical engineer has traveled the world 10 times with his wife, Yvonne, and felt singularly thrilled by Shen Yun, a company that also tours the world—each year taking a completely new performance to over 100 cities.

Mr. Loo was gratified to share his strong feelings on Jan. 12 about the presentation of the divinely inspired culture of China—a culture reaching back 5,000 years—because he feels our own culture is going in the wrong direction. “We’re losing our humanity and free choice,” he said.

Taking up the theme of free choice, Mrs. Loo said, “We all desire freedom above everything else. And perhaps that was the underlying thing that I appreciated most about [the performance] … the human dignity and the human freedom.”

I enjoyed it very much. It was so good.
— Wing Loo

Mr. Loo agreed: “When freedom of choice is the key, … you can choose to believe in the divine way or you can choose not to, and I like that. That’s the way it should be. … Nothing should be forced on anybody. They should be free to believe like they want to. I enjoyed it very much. It was so good.”

The traditional culture of China had always embraced the divine, thus New York-based Shen Yun’s original compositions, choreography, costumes, and digitally animated backdrops give theatergoers a chance to experience a time when humankind and the divine were intimately connected.

Mrs. Loo, too, was touched by the spirituality that is part of Shen Yun. Although she described the performance as fantastic and was terribly impressed with the timing and discipline of the dancers, she was perhaps most touched by the last dance of the evening, which she interpreted as a climactic return of a heavenly power.

What impressed Mr. Loo was that this performance actually stressed that we all come from heaven and that “we need to learn how to get back there.”

He planned to tell people that they need to see this performance—a performance which dares to present divine culture. He feels it might inspire others to see the need to connect to the divine “so that things will be better in the world, be better and be more peaceful.”

“I’m a strong believer in the Divine Way, and I just feel that this show is so important to the world,” Mr. Loo said.

“Divine Way is the Great Way,” he said.