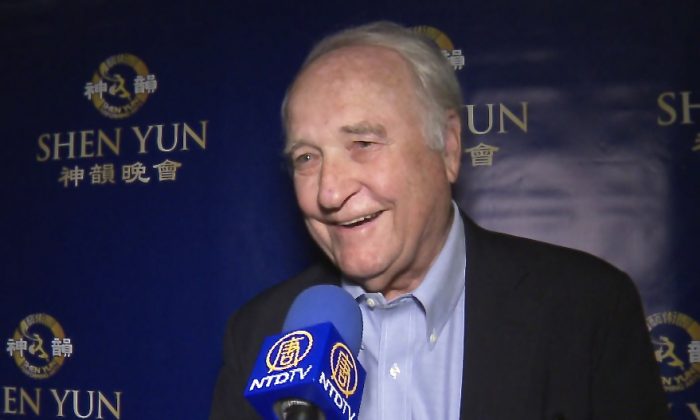 Richard Schweickert enjoys Shen Yun Performing Arts at the Segerstrom Center for the Arts, on March 12. (Courtesy of NTD Television)

Mr. Schweickert was pleased when he saw Shen Yun Performing Arts at the Segerstrom Center for the Arts, March 12. “I loved it,” he said. “This was especially interesting and rewarding. It’s a very, very good program.”

Mr. Schweickert said he is a huge fan of any kind of dance, and he was very impressed with Shen Yun’s dancers.

“I like the ability of the dancers,” he said. “When you watch the men especially, they are wonderfully conditioned … They’re in wonderful shape, and their moves are precise. I just love how precise and connected their moves are. They’re very, very interesting to watch.”

Mr. Schweickert said he loves the sound of Chinese music and has many connections to Chinese people and the culture. He also happened to be reading a book on Chinese culture before he saw Shen Yun. “I’m fascinated with China. I think it’s a great, great culture,” he said.

Shen Yun was established in New York in 2006 with the wish “to revive the true, divinely inspired culture of China and share it with the world,” according to the website.

Mr. Schweickert said he had wanted to see Shen Yun since he had heard about the upcoming performance.