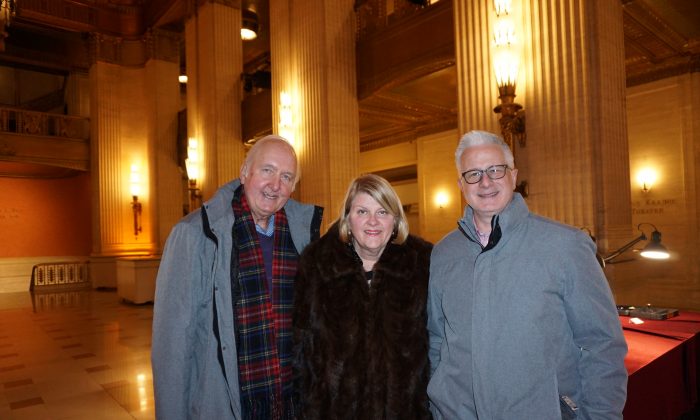 CHICAGO—Chief Financial Officer Joe Thielmann was enchanted by the music and colors that he experienced during Shen Yun Performing Arts, so much so that he said he would certainly come back next year.

Thielmann attended the performance at the Civic Opera House in Chicago on Dec. 30, with couple Jack and Sharon Parciak. The trio couldn’t stop praising Shen Yun after they experienced the divinely inspired cultural performance.

“It was phenomenal,” said Thielmann, who is the CFO at marketing agency Surge Innovations. The agency has worked with many well-known brands like Kelloggs, Hasbro, Sony, Universal, and Kimberly-Clark.

Jack echoed his friend’s praise, adding that he now “appreciates Chinese culture a lot more just from seeing the performance.”

Based in New York, Shen Yun’s mission is to revive traditional Chinese culture after it was nearly destroyed by six decades of communist rule. Classical Chinese dance is one way in which 5,000 years of Chinese culture have been passed down and retained. The company employs this traditional art form to revive this cultural treasure that was nearly lost. Thielmann agrees with Shen Yun and thinks it is important to revive this culture.

“They need to bring it back. I think even when you go to Chinatown here, it’s kind of lost a lot of its culture. When I was a younger boy, when we go to Chinatown, I thought the culture was much more heavy. And now it’s lighter I think,” he said.

He added that it was important to bring the performance to American audiences, especially “young American-raised Chinese who have really no clue” about their own heritage.

“I think that it would have resonated a little bit more for them,” he said.

Thielmann said he really enjoyed the stories portrayed in Chinese culture and history, adding that this was one aspect that American history lacks.

Shen Yun features multiple mini-drama pieces that draw upon stories and legends from different aspects of Chinese civilization, from the Yellow Emperor, to the different dynasties, all the way to the modern day. Chinese history has been documented and passed down uninterrupted for 5,000 years, but despite the vast variety of settings, most stories embody traditional Chinese values like loyalty, filial piety, and reverence for the divine.

Many of these stories are intended to inspire and resonate with people and provide a guide for people to live morally and lead virtuous lives. Thielmann thinks we need more stories like this. He particularly enjoyed the piece “The Final Moment,” which he felt reminds us of the consequences when a person’s moral compass is absent.

“I think we as adults, we have to continue to teach these traditions to our young while they’re growing up, to make sure they understand all that,” he said. “I think it’s getting lost.”

“And I think that maybe the parents that brought kids here today go home and they talk about it. I think that’s what they need to hear,” he added.

Meanwhile, Thielmann’s friend, Sharon Parciak, said she would like to watch the performance “again and again” even if it was the same program.

“I would just come here again. I brought a whole bag full of things, books, I want to study everything. I thought it was beautiful. I cried at the end. It made me very happy, and [it’s] so beautiful,” she said.

“And they are so talented. It just took my breath away,” she said. “I’m really going to tell people about this. I highly recommend people come and see this.”

With reporting by Nancy Ma and Janita Kan.