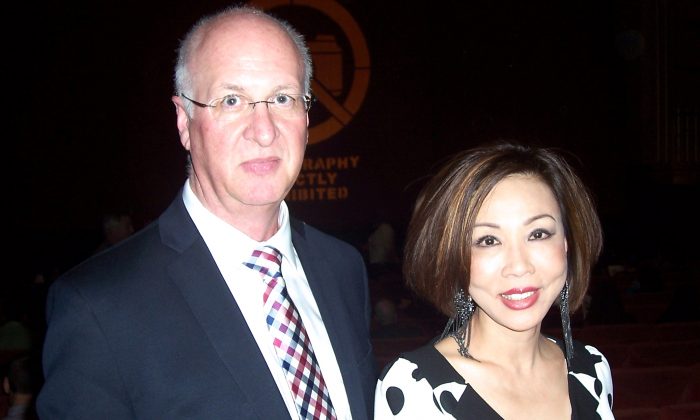 Ms. Elconin attended the performance with Mr. Gary Robinson, who works in software at IBM. Ms. Elconin said she had loved how New York-based Shen Yun was presenting the customs of the traditional Chinese culture through the performing arts.

Based in New York, Shen Yun artists came from around the globe in 2006 to revive the divinely inspired culture through the universal languages of music and dance.

Ms. Elconin said she had enjoyed seeing the customs and traditional practices such as meditation, classical Chinese dance, and the ethnic and folk dances like the Mongolian Chopsticks dance.

“I really enjoy this; I love it,” Ms. Elconin said.

Mr. Robinson said he enjoyed the stories Shen Yun told along with the captivating movements of the dance.

“I smiled the whole way through the first half,” Mr. Robinson said. “This is very entertaining.”

The simplicity of the stories had resonated with Mr. Robinson, who said he enjoyed the “movements, and just the joyousness of it.”

“Loved it so far; I like the light nature of it all,” Mr. Robinson said.