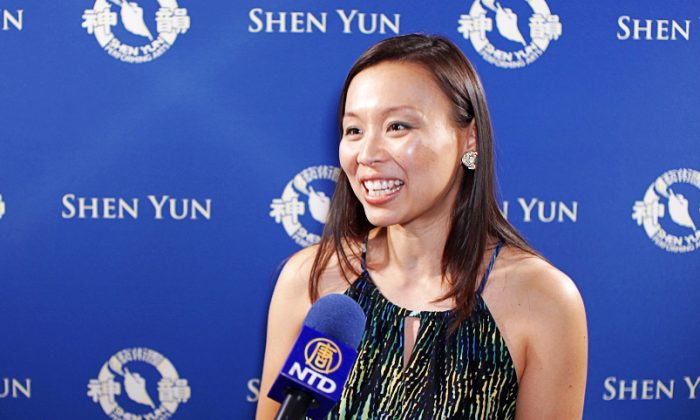 SAN FRANCISCO—Yukari Schneider, CEO and co-founder of Roovillage, had been looking at Shen Yun advertisements in awe for ages. She started looking for videos of it online, and her fascination did not go unnoticed, as she was gifted tickets for Christmas.

“It was a wonderful surprise,” said Schneider after the matinee performance on New Year’s Day at the War Memorial Opera House in San Francisco.

Shen Yun Performing Arts took her through 5,000 years of Chinese civilization through classical Chinese dance and a unique orchestra, and she left inspired.

“It was just another reminder of human beauty and how creative we are,” Schneider said. And even more so as she learned this culture, and the art she was seeing, was divinely inspired.

“Oh my goodness, knowing that it was meant to praise the divine. … I believe this is what heaven will look like,” she said.

“So beautiful, so elegant, so graceful. And the colors are heavenly,” Schneider said. The combinations of colors she saw on stage were unique, and so artfully designed “in a way that made sense, and just told you something special.”

Traditional Chinese culture is steeped in ancient values like respect for the heavens, wisdom and propriety, benevolence and justice—these are principles taken directly from the religions of Buddhism and Taoism, and Confucianism. The belief in harmony between Heaven and Earth was central to this civilization for 5,000 years, and for many audience members still rings true today.

“Art definitely connects you to the divine,” Schneider said.

Schneider said there was one particular dance that might have exemplified the idea of connection.

The dance “Lost in a Painting” showed a young woman captivated by a painting of scholars musing on an unfinished poem. For Schneider, it reminded her of her own experience with a favorite Keats poem, “both about wanting to enter a still life world and dreaming about going into another space.”

“Even though we are different in culture and space and time, we all have the same love and fascination, and we can express [them in] such different and beautiful ways,” she said. “That was just a beautiful experience.”

When she saw the artists on stage, together with the animated backdrop and the swell of the music, she felt like she had entered into another space as well.

“I felt like I was lost in this painting, only it was alive and like a dream,” she said. “It’s beautiful.”

The performance was an experience that inspired her, and would for days to come.

“Remembering things like this will continue to be a part of the rest of my life, and that is a beautiful thought, to think that my life would be more beautiful because of this show today,” she said.