CEO: Seeing Shen Yun Is My Honor and Privilege 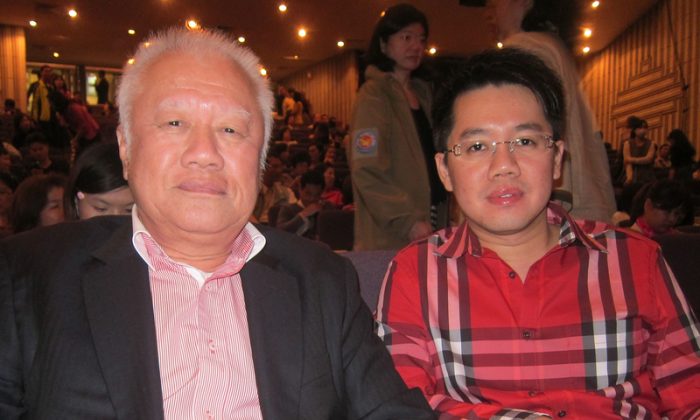 KAOHSIUNG, Taiwan—”It’s beyond words, and it’s the pride of the Chinese people,” said See Kok Eng about Shen Yun Performing Arts. The CEO and founder of the S.K.Y. Birdnest Trading Pte, Ltd, is an internationally known Singapore-based company.

On the evening of March 4, Mr. See attended Shen Yun Performing Arts New York Company’s 2015 premiere at Kaohsiung Cultural Center. Moved by the superb show, Mr. See exclaimed, “The animated backdrops gave me the miraculous feeling of being on the scene, in person. It’s incredible that the dances are so exquisite and spectacular.”

Introduced by his friends, Mr. See came to learn that Shen Yun is an artistic feast promoting the essence of the 5,000 years of the divinely inspired Chinese culture. After seeing the show, he said in excitement, “Even if we were leaving Taiwan for Singapore tomorrow, it’s worthwhile to be here. I am deeply touched. Fortunately, I have come here; otherwise, I’d regret in the future.”

Amazed by the high-tech animated backdrops, Mr. See praised the performance during the intermission. He said, “Throughout the first half of the performance, I watched the show attentively. The [backdrops] are well designed. Wow, perfect! In particular, the scene of water splashing out of the river was so vivid that I think, currently, only Shen Yun has this kind of technique. [It seemed] as if the water was about to rush to me. Wonderful! I feel it’s indeed wonderful.”

He added that “Shen Yun depicts the truth that as long as you behave righteously, you will have good rewards. This is the core element of the entire performance. We have also experienced a comprehensive set of arts. The dances are very special. A lot of effort must have been put into the choreography and rehearsal. I was deeply touched by the performance, and I’ll definitely see the show again if have the opportunity.”

Nodding his head, Mr. See Kok Eng said, “As I’m over 70 years old now, it’s my privilege and pride to see such a performance. After returning to Singapore, I’ll definitely tell my friends and relatives the values of Truthfulness, Compassion and Tolerance passed down by Shen Yun.”

Mainlander Feels Lucky to Have a Chance to See Shen Yun

Mr. Huang from Guangdong, China, watched the first performance of Shen Yun Performing Arts New York Company in the Kaohsiung Cultural Center on the evening of March 4. A business manager, Mr. Huang said he had long anticipated seeing Shen Yun in Taiwan and felt lucky to finally have the chance.

“I have been looking forward to it. In fact, I have paid attention to it for years and finally have a chance to attend it this year. Indeed a well-known show, it is really worth it. Though I had watched the Shen Yun program on the New Tang Dynasty networking, it is a totally different experience to attend it personally tonight,” said Mr. Huang.

New York-based Shen Yun tours the world bringing its depiction of traditional Chinese culture and values wherever it goes. Through classical Chinese dance, folk dances, and a live orchestra comprised of both Western and Chinese instruments, the company brings to life 5,000 years of divinely inspired civilization.

Fascinated with the variety of dance programs, Mr. Huang said excitedly, “Numerous, a lot of them. My senses are kept busy. It is a joy for both body and mind.”

“Sometimes my focus is on the background music, while the performance onstage is very excellent. Therefore, too often my senses are kept busy. This is a real feeling. The three-dimensional presentation and multiple levels onstage, in combination with colors and fusion of factors, are really perfect!”

Impressed with great profundity of Shen Yun, Mr. Huang said, “Unable to be summed up in a vocabulary word, it’s really great. The content of the show is literally immense!”

Shen Yun was founded on a mission to revive authentic Chinese culture, a heritage nearly destroyed during decades of communist rule. The Chinese Communist Party made systematic efforts to stamp out the traditional beliefs of Chinese people which were rooted in Buddhism, Daoism, and Confucianism.

“If I have to express my feelings, I deem it a blessing of three lifetimes.” He added, “Even in China, Shen Yun has been a well-known name.

“Though in China [traditional culture] has been uprooted and ruined by the communist party, everyone, including the masses, intellectuals, and those with deep insight know what is missing in China,” he said.

“Just as the emcee said, [Shen Yun] transcends arts. Behind such a simple line of arts is profound Chinese culture, which is the most precious,” he said.

“Deeply inspired, I am left in awe by the authentic culture and its profundity as well as artistic sincerity, which is beyond the mere content of arts.”

Mr. Huang explained, “A comparatively corrupt society with social values … is commonly referred to as a society of diversity. However, in fact, in comparison with traditions of the East and the West, it is a departure from traditions. Such a show is too hard to find since it is currently missing, a rarity. Shen Yun is reviving it and digging out deeper profundity within it.”

Finally Mr. Huang said, “Shen Yun not only saves traditional Chinese culture but also digs out essence of divine culture. What is unearthed is an “interpretation at a higher level! Therefore, this is a must-see show for everyone.”

‘The power of compassion’

Mr. Chen, also from China, watched Shen Yun on the evening of March 4 on his friend’s recommendation. After the show, he said excitedly that he was “much in favor of [Shen Yun].”

Fascinated with the opening scene, Mr. Chen said he was deeply impressed with the dance program “Power of Compassion.” “I’m particularly touched by the power of compassion, and spirit of those Falun Gong practitioners! Also the opening scene of the show was indeed magnificent!”

Having been influenced by atheism since his childhood, Mr. Chen was left in great awe after seeing values of a divinely inspired culture. “It’s very impressive and particularly stunning for me.”

He emphasized, “Here I feel something quite different. (Shen Yun) shows a respect for divinity and Heaven as well as a longing for compassion. Therefore, it is rather unforgettable and stunning.”

Mr. Chen said, watching Shen Yun and knowing the power of compassion and divinity would definitely bring a change to his life. “This is sure!”

Reporting by Dong Huiling and Billy Shyu and Amy Hsu