CEO of the Year Praises Shen Yun: ‘It Was Outstanding’, ‘I Would Recommend It to Anybody’ 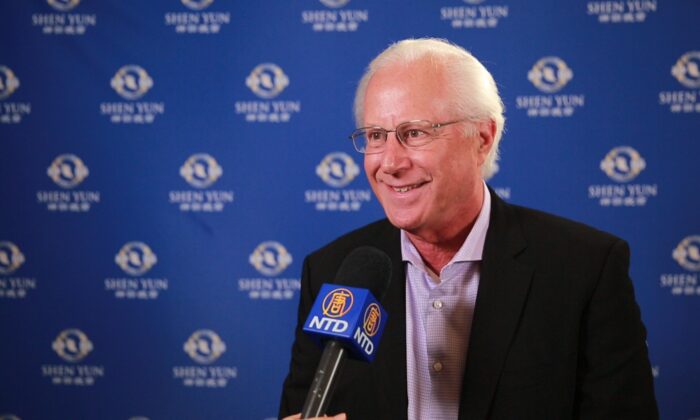 BIRMINGHAM, England—Todd Morgan, a business owner named Orlando CEO of the year in twice, had glowing praise for Shen Yun Performing Arts when he saw a performance in the UK.

“It was absolutely awesome! I mean, it was way more than I had expected. … The colors and the dancing. It was outstanding, it was outstanding,” Morgan said. “I would recommend it to anybody—anybody of all ages. It’s a really great show!”

Morgan had seen the Shen Yun Symphony Orchestra twice before and loved it. This was the first time he had seen the full Shen Yun performance with the dancers. He attended New York-based Shen Yun’s first performance in the UK this season at Birmingham’s International Convention Centre on Dec. 31, 2019. All four shows in Birmingham were sold out, and Morgan now knows why.

He attributed Shen Yun’s big fanbase and growing popularity to it being “such an awesome show.”

“Because people will go, like me, they will love it and they tell their friends, and they go,” he said.

Impeccable Artistry Down to the Finest Detail

“Oh, even down to the special effects. … The fog effect!” Morgan said in awe.

Shen Yun has a special trick (or two) up its sleeve when it comes to bringing its scenes and stories to life. Shen Yun’s website states: “Shen Yun’s digital projection instantly puts you on the scene. By extending the stage to infinite realms, the projection allows storytelling without limits. It also has a few surprises. A Shen Yun innovation creates seamless interaction between projection and performers on stage—an invention so original it has its own patent.”

“This was outstanding, the color, the music, everything combined, it’s just…” Morgan said as he marveled at Shen Yun’s artistry.

Shen Yun’s mission is to revive traditional Chinese culture, and its origin story left an impression on Morgan.

Shen Yun’s website states: “Based in New York, Shen Yun Performing Arts was established by Falun Dafa practitioners in 2006. The company’s mission is to use the performing arts to revive the essence of Chinese culture—traditionally considered a divinely inspired civilization. Since the Chinese Communist Party (CCP) is officially an atheist regime, it is afraid of the freedom of expression this arts company enjoys in the West.”

“They[Shen Yun dancers] had to leave China, and that’s just not a free world where you can express yourself and provide such great music and dance and everything else,” he said.

Shen Yun cannot be seen in China today, and even faces ongoing harassment from the CCP.

A Shen Yun dance piece also depicts the ongoing persecution of Falun Dafa (an ancient Chinese meditation practice that follows the principles of truthfulness, compassion, and forbearance), a practice that has been persecuted by the Chinese Communist Party since 1999.

“History good or bad, everybody should know history, because we can all learn from it.”

The Power of Music

Morgan noted the healing power of music. His son is a music therapist, so Morgan understands the traditional Chinese belief that music can heal, as well as nurture one’s character.

“It’s really awesome and music is used in so many different ways,” Morgan said.

Shen Yun’s orchestra was the first in the world to permanently combine classical Western and Eastern instruments, and Morgan enjoyed the unique sound. The next time he sees Shen Yun, Morgan plans to bring his grandchildren.