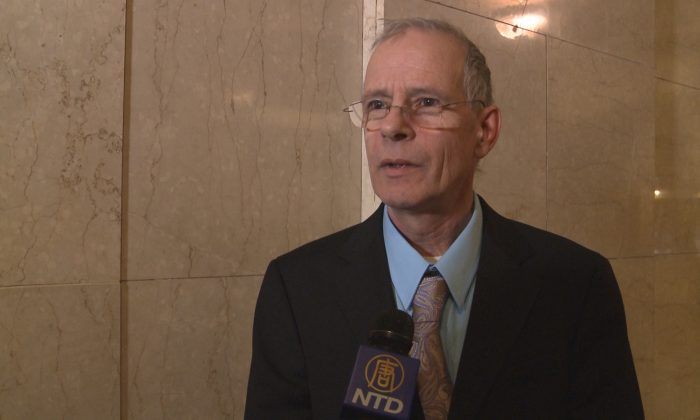 BOSTON—Paul Ashton, the CEO of a biotech company, went to see Shen Yun at Citi Wang Theatre on Sunday afternoon.

“It was very in sync,” he commented on the dance performance.

Mr. Ashton said the music presented an “interesting blend of the two cultures.” For example, the performance featured the two-stringed Chinese violin, the “erhu.”

Mr. Ashton also said he liked the dances very much.

Classical Chinese dance combines graceful moves with more dramatic leaps and tumbling techniques. “It is able to transcend ethnic, cultural, and even linguistic barriers, taking this well-established Chinese culture and presenting its essence to the world,” according to the Shen Yun website.

“It’s heavenly. It’s just totally amazing. It’s lifting, it’s lightening. Everything’s done so perfectly, everything seems to be in this perfection. I’m in awe. This is my fourth show. I want them in my living room every day,” he said.

According to Shen Yun’s website, each performance presents “the deeper spiritual core of the ancient culture, with its values of benevolence, honor, propriety, wisdom, and sincerity, as well as a reverence for the gods and the heavens.”

Mr. Beaulieu understood this in a way that humans can improve their state of being. “We as human beings have always got room for improvement, always have room for refining ourselves, with these examples, these beautiful examples which are so high level, how can you beat that? It does give you an inner sense that you really want to cultivate yourself to a higher level, he said.”