CEO Moved by the Love Behind Shen Yun 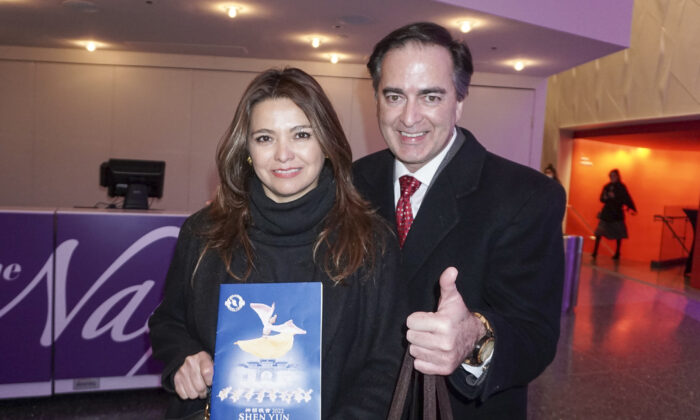 Carlos Zaldivar and his friend Lucy at the Shen Yun Performing Arts performance at Tobin Center for the Performing Arts in San Antonio, Texas, on Feb. 18, 2022. (Sonia Wu/The Epoch Times)

SAN ANTONIO, Texas—Things done out of love often transcend the ordinary. Shen Yun Performing Arts was formed by artists around the globe who wished to express their love for China’s lost culture and share this love with the world.

“Nothing that is made without love is good, and when you do shows like this, it really shows and portrays the love, the sacrifices, that goes on behind what this shows,” said Carlos Zaldivar, CEO of an architecture business.

He expressed that he liked every aspect of Shen Yun, which is based in New York.

Shen Yun’s live orchestra features traditional Chinese instruments such as the pipa and erhu, while blending them harmoniously with a classical Western orchestra.

“The music was amazing, really beautiful, and the instruments of course [are] not very common in San Antonio, especially the old Chinese instruments,” he said.

China’s ancient culture is said to be divinely inspired. Shen Yun strives to present divine inspiration to the audience in every dance and musical composition.

“The closeness that you see in this show with the divine, I think it’s an important connection that we don’t see nowadays.
— Carlos Zaldivar

“Absolutely very inspiring and it is something that we should be able to communicate more to people,” Mr. Zaldivar said. “The closeness that you see in this show with the divine, I think it’s an important connection that we don’t see nowadays. We are flooded with junk on the internet and the media.”

Mr. Zaldivar added that the media and life in general usually have us focused on what is immediately before us instead of looking at the picture as a whole.

“People need to be aware that sometimes, we don’t see beyond our door because,” he said. “It’s good to be involved in our own lives and do our things, go to school or work, make a living, but it’s also good to open the window and see what’s out there and see beyond our walls.”

Shen Yun is a great way to experience more beyond ourselves, he said.

Mr. Zaldivar added that he bought his Shen Yun tickets knowing that he wanted to experience its beauty with his loved ones.

“So I brought all my friends and the kids and these other friends because I wanted them to have the experience of what this show is all about [and] the virtues that this show exemplifies,” he said.