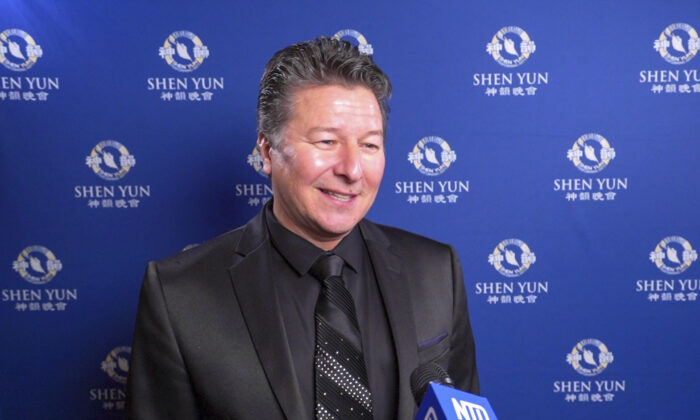 SAN FRANCISCO—Shen Yun Performing Arts continued its world tour to San Francisco where it performed its all-new production at the War Memorial Opera House. There, Rebeka and Mark Le Mon attended the New York-based company’s classical Chinese dance performance and shared their deep impressions and artistic inspiration from the evening. Mark is the CEO of a construction project management company and has composed music for film and television. Rebeka is a fashion designer with her own clothing company.

“This is my second time here,” Mark said. He enjoyed Shen Yun so much the first time that he brought guests this year to share the experience.

“Each [year] is different. The first one was opening my eyes to the technology involved with combining the choreography and the filming and of course, the music, which is kind of amazing, and seeing the same thing this time as well, where you have the cues of the artists and the dancers in exactly the right spot—and the music. It’s very difficult to do, I know that from my profession, but I was very impressed,” Mark said.

“The technical [achievement] is very difficult to do, and to see the timing with the dancers and the musical artists, to combine that with the technology that’s coming out of the screen behind them is pretty impressive,” he continued.

Since Mark had seen a prior Shen Yun performance, he told his guests before the curtain rose that, “you’re going to be really impressed with how the dynamics of the dance and the music and the animation come together.

“It was something I have never seen before, a mix of something new and something old. It’s a mix of everything all together,” Mark told them.

This year, the dances that depict China’s persecution of followers of the spiritual practice of Falun Gong stood out to Mark. The patented technology of Shen Yun’s backdrop provided details that impressed him and made him feel like the story was unfolding live before him.

Designer Rebeka Le Mon, the wife of CEO Mark Le Mon, was bowled over by the couture costumes on Shen Yun’s performers.

“I loved the fabrics. … The way they were floating in the wind looked like a dream, like a picture,” Rebeka said.

“I really like the show. I really appreciate it. And I can imagine they did hard work practicing, so, for the first time [attending], it’s amazing,” she said.

“I’m totally amazed by all the dresses. From my perspective, as a fashion designer, I was amazed by the blue dress and by the pink dress—I think she was the singer. Those two dresses were amazing,” Rebeka added.

“I loved all the colors. I was thinking all the time about our [clothing] company, and it just was amazing to see those colors here in this show. … I already thought about a dress that will look similar to one of the ones in the show—the blue one and the pink one. I want to create something similar,” Rebeka said.

One dance piece that especially stood out to Rebeka is a humorous story that depicts the exploits of a number of wives: “The Miraculous Flute.”

“I love that, that was so so funny and so nice.”

“I also like the one with the piano and the lady in the pink dress singing. Her voice was—I’m… it’s like outstanding, I don’t have words to explain it,” Rebeka said.

“I was reading the lyrics but I was more concentrating on her voice and the music, so even though I don’t understand the language, it’s like you can feel it. You can feel it inside, that the lyrics are amazing, even without reading it.”