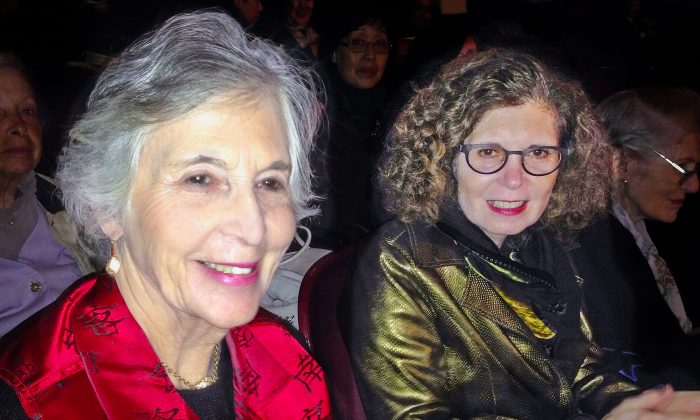 Ms. Dunning is founder and CEO of Sphere E, an environmental software firm that creates tools to help the building industry optimize decision-making around sustainable products.

She elaborated on where the intensity of Shen Yun comes from: “The very different experience of all the segments of the orchestra playing with full intensity at the same time, in contrast to a more Western pattern of one section of the orchestra dominating with the rest of it receding somewhat.”

Indeed, Shen Yun’s special ensemble of instruments—traditional Chinese instruments blended into a classical Western orchestra—and unique arrangements are what make the orchestra unlike any other.

“The Western orchestra serves as a foundation, accentuating the distinct sound of Chinese instruments,” reads the company’s website.

Most of what Shen Yun performs are original compositions that draw on China’s 5,000 years of culture. Shen Yun calls this “a new frontier in classical music.”

Ms. Dunning’s appreciation for music also comes from a deep place. “I grew up in a family that values music very much,” she said, adding that her grandfather taught music at college.

“As a young child, starting at five, I was taken to Tanglewood [home of Boston Symphony Orchestra] every summer. So I just grew up listening to music as much as learning to read,” she said.

Ms. Dunning was exchanging insights with her friend Kathleen Thurston-Lighty, a writer of everything from fiction, to speeches, to marketing for educational programs. Ms. Thurston-Lighty shared many of the same thoughts about the “intensity of the experience.”

She elaborated further at the end of the evening in a conversation with her husband:

“I would say it’s thrilling just to see all these musicians are playing all at once at such intensity, where generally you go to orchestra symphony, the strings are playing, then flutes, and not everybody is playing at the same time with that level of intensity, so this is very different.”

Reflecting on the theme of nature and the environment he also commented:

“The feeling I think you can sense [is] a connection to nature, and to grandeur, and as Kathleen said, it was very exhilarating.”