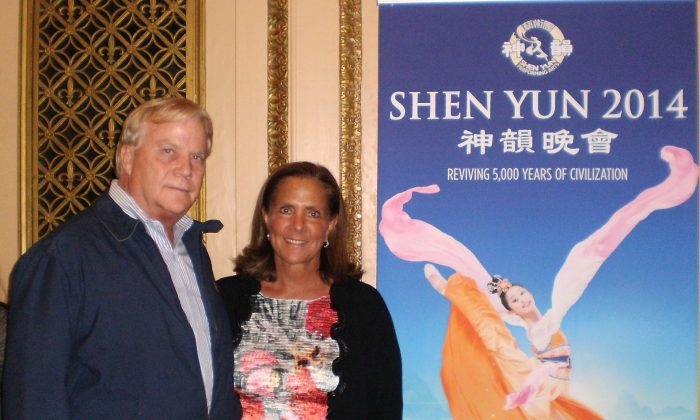 Centuries of Culture Presented by Shen Yun in Two Hours

OMAHA, Neb.—“It’s like trying to take centuries of culture and put it into a two-hour capsule,” said Jenny Vandeveer of the performance she had just seen by Shen Yun Performing Arts Touring Company.

“I like the way they blend the old and the mythological with the present and marry the two and try to give the audience a very broad overview of a very long and deeply embedded belief system,” the consultant in finance and real estate for CMSHOME said.

Ms. Vandeveer summed up Shen Yun’s mission well. According to ShenYun’s website, “Through the universal language of music and dance, Shen Yun weaves a wondrous tapestry of heavenly realms, ancient legends, and modern heroic tales, taking you on a journey through 5,000 years of Chinese culture.”

Ms. Vandeveer attended with Berny Mackey, a factory representative at Carrier Corporation, on March 9, at the Orpheum Theater.

“It’s a culture that we don’t see here in Omaha, Nebraska, in the middle of the United States and so any exposure that we get to this is far more than we ever see on a day-to-day basis, so I’m just impressed,” he said.

The couple were transfixed by the artistry of the performance.

“I was amazed by the choreography and how in sequence and how they follow each other so well,” Mr. Mackey said. “You just don’t see any flaws,” he said of the classical Chinese dance presented.

Ms. Vandeveer’s was amazed as well:” I’m astonished. I think that the graphics are remarkably blended with the live performance so that it’s almost seamless as to what the story is, and the precision, and the beauty, and the very eloquence of their dancing is remarkable, and it’s very engaging. You are right there with them. You hardly know where to look because there’s so much movement, but everything is in perfect harmony.”

Ms. Vandeveer had a somewhat unique perspective on the performance because of her previous trips to China.

“I had been to China not too long after Tiananmen Square [massacre of students in 1989], so I have watched, or been aware of the history and changes and the beauty of the country and many of the past dynasties … The government tries to wipe out that part of Chinese history and they were just not able to do it because it was so strong, and I think the people held very tightly to their traditions and you can see that in the dance,” she said.

On the whole, Ms. Vandeveer feels that the Western world is mostly unaware of China, or of even the idea of a long tradition.