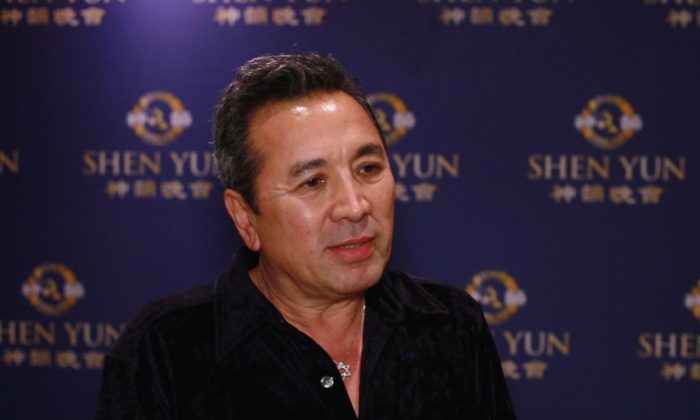 HOLLYWOOD, Calif.—The famous Dolby Theatre proved to be the perfect venue to showcase the international phenomenon Shen Yun Performing Arts as they played to another sold out house on Jan. 24.

Seeing Shen Yun on Saturday evening, Mr. Prentice Lennon was impressed by the magic he experienced during the performance.

Mr. Lennon is a renowned celebrity photographer. Photography was a natural progression for him from being a model. He said he experiences his camera as tool that lets him see into his clients’ souls.

“It is a magical history tour,” Mr. Prentice exclaimed, “I thought the show was magical, I really  did.”

Shen Yun uses a digital backdrop as a vehicle to bring together the scenes of Heaven, earth, the dynasties and ethnic regions of ancient and contemporary China.

“The backdrops are as grand as they are intricate. So remarkably true to life, they allow you to forget where you are, and journey to another place and time,” says Shen Yun’s website.

“My favorite thing was the special effects,” Mr. Lennon added, “it was so incredible to see somebody come on the stage, disappear, fly away, then come back.”

“I thought the special effects were really amazing, it was great to see kind of a history lesson, without being preached to,” he said, “but we see [history] in the dance and the beauty of the colors and the staging.”

“In the first half it was so surprising, but it was so clever because the timing has to be spot-on perfect,” he said.

Mr. Lennon genuinely loved the dancers and thought they “were amazing, they really were.”

Also supporting each dance is the Shen Yun Orchestra, a unique blend of Chinese and Western instruments.

Each year they produce refreshing and delightful original scores.

The sound of the erhu enchanted Mr. Lennon, as Lu Sun, the erhu soloist, played the musical arrangement, “All For Today.”

“The erhu is one of the most important Chinese instruments, with a history of over 4,000 years. Though it has only two strings, it can convey a wide range of emotions,” says the company’s website.

Shen Yun’s vignettes present many themes and cultural lessons, from ancient and contemporary China. Mr. Lennon embraced them all.

“There were some really touching moments, but there were funny moments,” he added.

He loved the artistry of all of them.

He believes culture “is a learning method tool for people to experience, and say maybe I want to go there someday.”

Each Shen Yun company has two bilingual hosts, who open the gates of understanding for the audience into each wondrous realm, story, or myth.

“Just some of the stories the narrators told about were touching,” Mr. Lennon said, “that some of the dances can’t be performed in their own countries, it is kind of sad.”

“Shen Yun cannot be seen in China today, where traditional culture has been nearly lost. Yet Shen Yun—a non-profit organization—has become an international phenomenon, bringing the wonders of ancient Chinese culture to millions across the globe,” states the website.

“I think people should come, bring their whole families, educate them,” he said. “Music and dance are international languages, you don’t have to speak the language to experience the culture.”

“If it is done in such a way, in such a grand way,” he added, “with all the special effects, the dancers, the costumes, it gets people excited!”

Even though he did find Shen Yun exciting, Mr. Lennon also values the peacefulness and relaxation found in Asian culture.

He said that the world has become violent and crazy for him, so he reached for creating a new home environment, even a meditation garden, based on ancient Asian culture.

“Because we are only here for a short time, we have got to start to take care of the world, and the world is left for others to enjoy, and culture is one of those things that if we are not careful, is going to disappear,” he added.

He felt Shen Yun speaks of ancient Chinese culture, which typifies the best of all cultures.