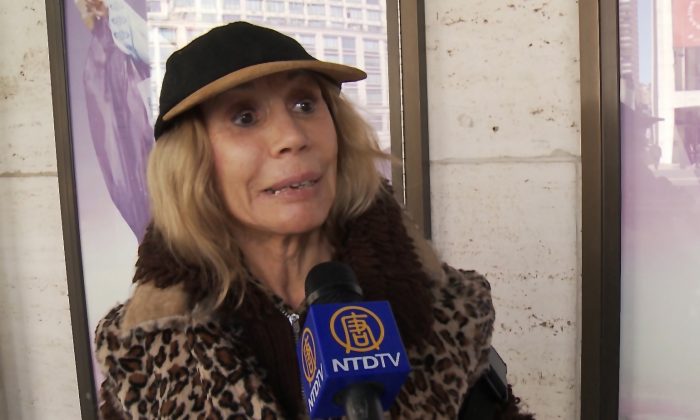 NEW YORK—The astounding Velma, queen of illusion (as described on her website), has performed magic on television for those such as David Letterman, Conan O’Brien, and Merv Griffin. When she saw Shen Yun Performing Arts at the David H. Koch Theater at Lincoln Center on Sunday, she said it was marvelous.

“It was well, well, well done in my opinion,” said Velma, who only ever goes by one name. “They are so devoted,” she said of the New-York based company.

“I love the grace … It obviously is a lifetime of devotion, which any real art is,” Velma said.

The magician has long worked in the entertainment industry, and says she has always been attuned to body movement. Most of her work involves slight of hand. The flexibility of the female dancers amazed her: “These girls have backs that bend in two!”

Shen Yun features the world’s best classical Chinese dancers, and it also brings to the stage the diverse ethnic and folk dances from the different regions and time periods in China. Velma delighted in the quick, light steps of some of the dance forms—“They are delicious,” she said.

“I always did admire the Chinese, because it is such an ancient civilization,” she said. Shen Yun tours to more than 100 cities around the world, reviving 5,000 years of Chinese culture. It depicts ancient legends and myths from across different dynasties and eras through short drama dance pieces, while several pieces show contemporary life in China.

“The narratives were also absolutely wonderful,” Velma said. “I loved it, I really did.”