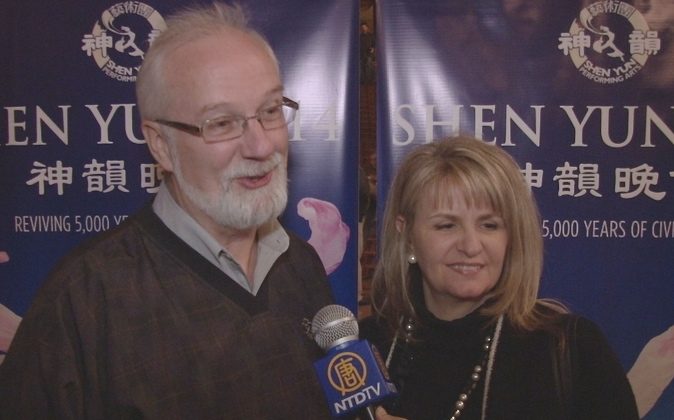 KNOXVILLE, Tenn.—CBS sales manager William McCauley may be used to seeing entertainment, but he said there was nothing quite like the Shen Yun Performing Arts performance he watched at the Tennessee Theatre on Jan. 7.

“I think it’s fantastic and everybody should see it,” he said. “I really do because it’s something that we don’t really know much about.”

Mr. McCauley attended the show with Kelly McCauley, a Human Resources Generalist for TeamHealth. Some friends had recommended the show to them.

“They said it was something you couldn’t find anywhere else,” Mr. McCauley recalled.

He said he was particularly impressed by the educational value of the performance.

“It was a learning experience,” Mr. McCauley said. “People really contributed a lot of effort into making it look as entertaining as it has become, while you’re learning about Chinese culture.”

Shen Yun Performing was founded in 2006 by elite Chinese artists who gathered in New York with a wish to form a non-profit dance group that would revive traditional Chinese culture. Since then, it has become a global phenomenon.

“Having the opportunity to see the culture and the history is just amazing,” he said. “It has been really colorful.”

Shen Yun also uses high-tech backdrops to transport the audience to remote places such as the Himalayan peaks and the celestial kingdoms of Chinese folklore.

“I really liked the end, the way that Chinese culture is represented,” Ms. McCauley said. “ It is colorful, it is beautiful, and very artistic and it makes us want to go to China.”

“I think the artistic side of it is absolutely amazing, and I think everybody would enjoy seeing it,” Mr. McCauley said.