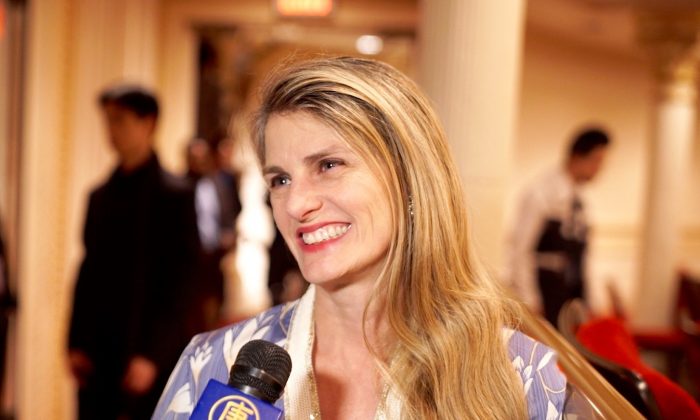 NEW YORK—Three-time Tony Award winning producer Bonnie Comley is a regular patron of Carnegie Hall and knows what it takes to get there.

On Saturday evening, it was Shen Yun Symphony Orchestra that was receiving Ms. Comley’s praise.

“Everybody loves it,” Ms. Comley said. “Again, the talent that it takes to get to this place, in someone’s career—they’re just at the pinnacle when they can come here and perform at Carnegie Hall.”

Ms. Comley is a stalwart advocate of Broadway—she has won multiple awards not only for her work in production, but also her philanthropic work furthering theater study in universities and high schools. In 2013, she founded a stage-to-screen production and distribution company to further avail the public of more Broadway works. So she is more than well acquainted with work that hinges on talent.

Shen Yun Symphony Orchestra, on the surface, seemed much like the traditional Western symphonies Ms. Comley is so accustomed to. But then there were undertones of something culturally Chinese, she explained. There were instruments like the gong, and the plucked pipa (Chinese lute), and the two-string erhu. That made it simultaneously new but accessible.

“So it’s like a perfect blend of something foreign for me, and something very Carnegie Hall and New York,” Ms. Comley said.

The program indeed provided a wide variety, almost as if it were put together to show how Carnegie Hall was a fitting stage for ancient China. Some pieces were original compositions that, despite being played by a full Western symphony, had distinctly Chinese melodies that drew upon the many ethnicities, dynasties, and legends of China. Others were classical favorites like Sarasate’s “Gypsy Airs” and Tchaikovsky’s “Marche Solennelle.”

The Shen Yun Symphony Orchestra is a part of Shen Yun Performing Arts, which was established in New York to revive China’s 5,000-year-old, divinely inspired culture through the arts.

Then there is Carnegie Hall, the brainchild of a pioneer of classical music in America–conductor Walter Damrosch–made possible by a philanthropist who once declared the music hall would host history.

The enterprising young Damrosch had met newlyweds Andrew Carnegie and Louise Whitfield on a ship traveling from London to New York, and made his pitch for a legendary concert hall. A partnership was formed, and the music hall became a reality.

It opened to a five-day music festival, to which Damrosch invited none other than the then very popular Russian composer Tchaikovsky.

It was said, according to Carnegie Hall’s archives, that he later remarked that Americans knew his music better than Russians as Damrosch asked him to compose a new piece and he instead opened with “Marche Solennelle,” which he composed originally for Tsar Alexander III’s coronation. He thought the audience at the new music hall might not recognize it, but they did.

Since then, some of the country’s greatest and most prominent figures have appeared at Carnegie Hall, and its reputation as a musical fixture is undisputed.

“I think we all feel that, being part of a live musical performance, it’s just that one time, only here, and we’re all sharing in that together,” Ms. Comley said of the experience. “So I think everyone just really appreciates the talent and the craft that’s up there, and what it took to get to this point. And just sharing it together at Carnegie Hall—what could be better?