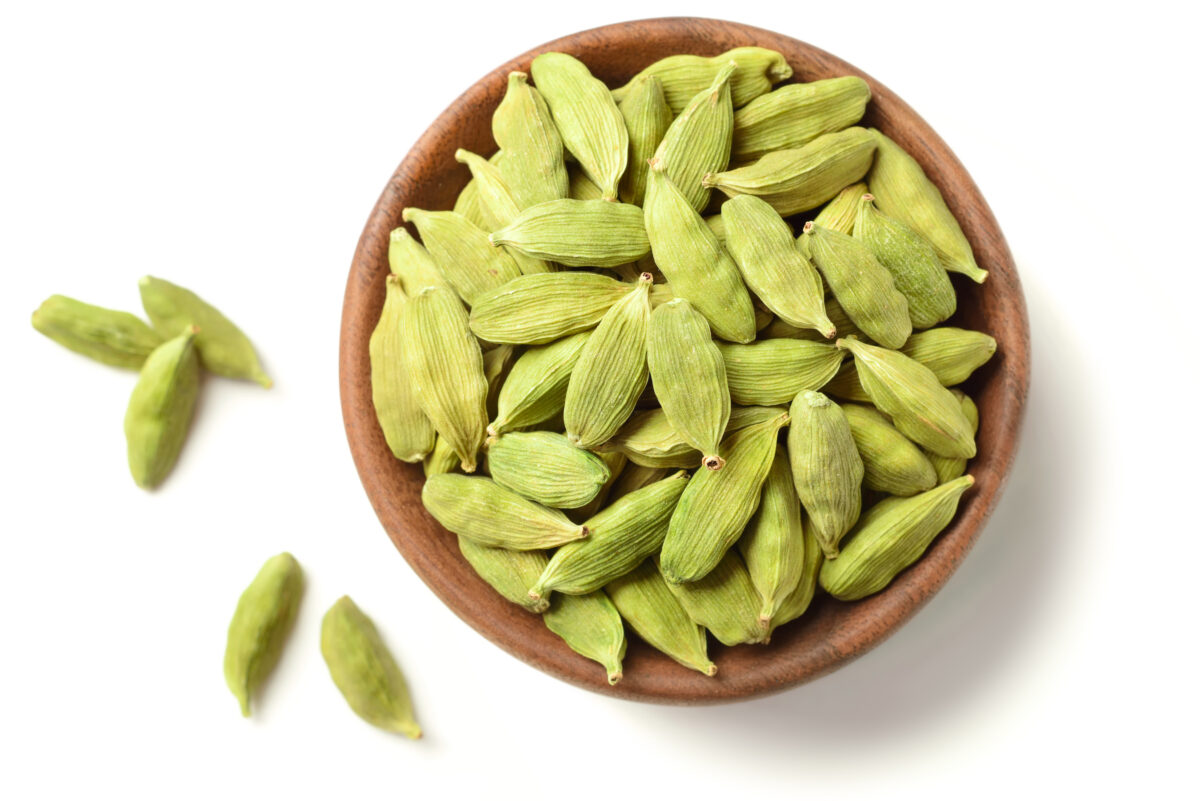 A compound found in the spice cardamom shows promise in slowing the growth of an aggressive form of malignancy. These are other steps you can take to prevent tumors or support treatment.

Research[2] presented at the Experimental Biology 2022 meeting in Philadelphia demonstrated how a compound found in the spice cardamom, could have therapeutic potential against triple-negative breast cancer.

These make up between 70% and 80% of all diagnosed breast cancers, but there are two special types of invasive breast cancers that account for fewer diagnoses but are more difficult to treat.

Triple-negative breast cancer gets its name from testing negative for estrogen and progesterone receptors, and negative for the protein called HER2.[4] The lack of hormonal receptors in the cancer cells means the tumor doesn’t respond to hormonal therapies or those that target HER2. This type of breast cancer is more common in women younger than 40, Black women and women with the BRCA1 genetic mutation.

Current treatments include surgical resection and a combination of one or more treatments of radiation therapy, chemotherapy and immunotherapy, which have also been referred to as cut, burn and poison. Unfortunately, this has been the sum of the treatments available in Western medicine. Researchers are now seeking treatment from medicinal plants and have found one compound extracted from cardamom and other herbs may have anticarcinogenic properties.[5]

The compound — cardamonin — has received attention for over a decade for chemoprotective and chemotherapeutic properties.[6] Cardamonin belongs to a group of flavonoids called aromatic enones that are often responsible for the yellow color in plants. The group of flavonoids is called chalcones and has a history in medicinal chemistry.

One study[7] published in 2019 noted that cardamonin has anti-inflammatory and antitumor activity, but the mechanism it uses to inhibit breast cancer had not been identified. They found that cardamonin inhibited the Nrf2-dependent reactive oxygen species (ROS) scavenging system. The accumulation of ROS induced apoptosis in the cancer cells.

They also found that the compound reduced glucose uptake and lactic acid production, which affects cancer cell metabolism. A second study[8] in 2020 wrote that the compound “is well-known to inhibit proliferation, migration, invasion and induce apoptosis … The good biosafety and pharmacokinetic profiling of cardamonin satisfy it as an attractive molecule for the development of an anticancer agent.”

Past research has also demonstrated that cardamonin has antineoplastic activity against colon cancer.[9] The current study presented at Experimental Biology 2022 meeting had encouraging results against triple-negative breast cancer, showing the compound affected the genetic pathway that cancer cells use to avoid the immune system.

The current lab study used cell lines of triple-negative breast cancer from women with African-American ancestry and another cell line from women of European origin.[10] According to the press release, the researchers investigated how the compound affected programmed cell death of the lignin 1 (PD-L1) gene found more plentifully in tumor cells than in normal cells.[11]

The overexpression of this gene plays a vital role in how cancer cells can evade the immune system. There was a dose-dependent decrease in cell viability across both cell lines, but a reduction in PD-L1 expression only in the Caucasian cell line. The researchers wrote:[12]

“The data show that cardamonin may alter the production of PD-L1 at the transcription level in MDA-MB-231 [Caucasian] TNBC cells, but not in MDA-MB-468 [African American] cells, corroborating with literature showing differences in the tumor microenvironments between African Americans and non-African Americans.

In conclusion, cardamonin may have the therapeutic potential to decrease the levels of PD-L1 in the tumor microenvironment combating the cancer cells’ effectiveness of evading the immune system.”

Patricia Mendonca, Ph.D., is the assistant professor and research analyst at Florida A&M University who presented the research in Philadelphia. She stated in a press release:[13]

“The fact that cardamonin has been used for centuries as a spice and, more recently, as a supplement shows that its intake is safe and may bring health benefits. Our research shows that cardamonin holds potential for improving cancer therapy without as many side effects as other chemotherapeutic agents.”

The War on Cancer Starting to Focus on Medicinal Plants

Mendonca also stressed the importance of investigating medicinal plants, saying:[14] “It has been challenging to develop a targeted therapy for triple-negative breast cancer that is safe and effective at the same time. Because of this, there is a critical need to investigate medicinal plants as a new way to combat this cancer.”

It was in the mid-1970s when scientists believed they understood the molecular basis of cancer. The hypothesis was that cancer was caused by sequential mutations that could then be precisely targeted using gene-based therapies. This ushered in the era of targeted therapy, which has been a bitter disappointment. While scientists were excited by lab results, targeted therapy has barely moved the needle on cancer death rates.

During my interview below with Travis Christofferson, author of “Tripping Over the Truth: How the Metabolic Theory of Cancer is Overturning One of Medicine’s Most Entrenched Paradigms,” and Dr. Abdul Kadir Slocum from the ChemoThermia Oncology Center in Turkey, Christofferson commented on the broken system of investigating and choosing chemotherapeutic agents:[15][16]

“An example of that is Tarceva, which was approved about 10 years ago. It’s got a pretty bad side effect profile. It’s expensive. It boosts median survival for pancreatic cancer patients by 10 days. That’s what we’re dealing with, those kinds of things.

Ironically, we have this Catch-22 in the system where Big Pharma is incentivized to de-risk this process because it’s so expensive and makes these marginal improvements.

In the meantime, we have these non-patentable therapies sitting on the sidelines, that could potentially be game changers for cancer, but they cannot get the billion-dollar backing to push through these huge trials to get the burden of proof to where the oncology community will actually incorporate them to the clinic.

In the epilogue in my book, I ask the question, What would it look like today if we had a less onerous regulatory environment like they did in the ’70s, and good oncologists were allowed to … try some of these therapies in the clinic and see what happens? That’s why I’m so happy we have Dr. Slocum here, because he’s given us his first glimpse of what metabolic therapies will look like when they’re incorporated into the clinic.”

Cancer Is a Metabolic Disease

Cancer, including breast cancer, is a metabolic disease that can respond to nutritional ketosis. In this interview with Christofferson and Slocum, we discussed how Slocum and his team at ChemoThermia Oncology Center in Turkey are using fasting to support their chemotherapy efforts with cancer patients. The patients are first put on a ketogenic diet, which creates metabolic stress in the cancer cells.[17][18]

Before administering chemo, the patients do a 14-hour fast, which increases the metabolic stress. Typically, blood glucose levels are around 80 milligrams per deciliter (mg/dL) when the team then applies glycolysis inhibitors that create additional stress, since the cells are already starved of glucose.

Next, the patients receive insulin to lower their blood glucose levels even further before chemotherapy is administered. In the days after chemotherapy, the team uses hyperbaric oxygen therapy and hyperthermia, plus a daily infusion of glycolysis inhibitors with high dose vitamin C (50 grams) and dimethyl sulfoxide (DMSO).

The results have been notable and published in several papers,[19][20][21][22] including treatment of stage 4 triple-negative breast cancer.[23] Thomas Seyfried, Ph.D., professor of biology at Boston College, is also a leading expert and researcher in the field of cancer metabolism and nutritional ketosis.

His book, “Cancer as a Metabolic Disease: On the Origin, Management and Prevention of Cancer” is a foundational textbook on this topic, and in August 2016, he received the Mercola.com Game Changer Award for his work. In a past interview,[24] we discussed the mechanisms of cancer and the influence of mitochondrial function, which plays a crucial role in the development and treatment of this disease.

His landmark cancer theory[25] was first published in 2010. Many of his views are encapsulated in his paper[26] “Mitochondrial Substrate-Level Phosphorylation as Energy Source for Glioblastoma: Review and Hypothesis,” published online December 27, 2018. He’s also published several other papers[27][28][29][30][31][32][33] on the metabolic underpinnings of cancer.

Cancer is a metabolic disease deeply rooted in mitochondrial dysfunction. In a nutshell, cancer cells burn glucose, which generates far more ROS than fat and ketones. To burn fat, the cell must be healthy and normal, so a high-fat, low-sugar diet essentially starves cancer while nourishing healthy cells.

To be clear, unless you’re on a drug that requires you to eat at certain times or when you take it, time-restricted eating and a ketogenic diet can safely and easily be implemented even if you’re going through conventional cancer treatment. In fact, as Slocum has demonstrated, it can make chemotherapy more effective.

It goes without saying that when using metabolic therapies, the patient carries a significant responsibility for their own outcome. The doctor cannot cook your food, force you to take supplements or withhold food when it’s time to fast. You must be very diligent and disciplined to follow the specified regimen.

Essentially, if you have a life-threatening condition like stage 4 cancer, you need to be a bit obsessive and follow the regimen to the letter. You cannot veer from the protocol if you expect to achieve the kind of results Slocum has found in his treatment facility.

That said, if you’re seeking to optimize your health or slow down the aging process, cycling through “feast and famine” — as opposed to continuously remaining in nutritional ketosis — appears to be a better approach. If you do it continuously, it can actually be highly counterproductive. This applies to using nutritional ketosis for optimal health or cancer treatment. As Slocum describes the treatment protocol at the center:[34]

“As an example, patients come and they’re on a ketogenic diet. When they will be coming in for chemotherapy after a 14-hour fast, then that would apply a glycolysis and insulin to lower the glucose and then apply chemotherapy.

Patients being treated for cancer must also have days where they eat more net carbs and more protein, especially with strength training, to prevent sarcopenia that is common in cancer. This is because when cancer cells are deprived of glucose, they can break down muscle tissue to extract glutamine.

Interestingly, Seyfried is working with a glutamine inhibitor called DON to prevent this from happening, thereby making the therapy even more effective. It is important to understand that the “metabolic magic” actually occurs during that refeeding phase when net carbs and protein are increased, which increases muscle growth.

After a day or two, you then cycle back into nutritional ketosis. Typically, this is done once a week. To a degree, Slocum uses this technique on cancer patients as well, although they’re only allowed to eat higher amounts of net carbs once every two or three weeks, on the day they receive chemotherapy.