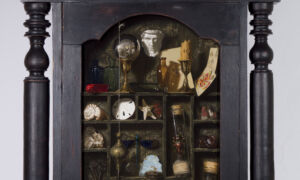 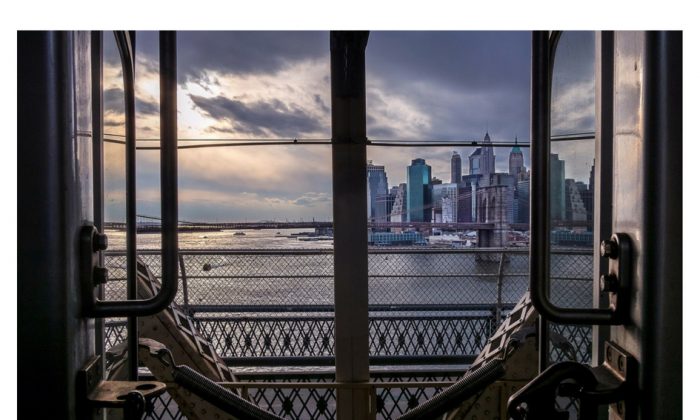 A photograph taken by Richard Koek of the Manhattan skyline as seen from between two subway cars on the Brooklyn Bridge. (Courtesy of Richard Koek)
Fine Arts & Craftsmanship

NEW YORK—It’s certainly not the savanna, but in the shadows of New York’s streets, photographer Richard Koek can be found lying in wait, ready to pounce on that perfect picture.

New York’s architecture sets the scene, as he waits patiently for his subjects to show up, yet he has no idea who they are or even if they’ll turn up.

Street photography is a genre Koek enjoys, he says, due to the necessity of making quick decisions. Sometimes they’re split-second decisions, such as when he captured the almost painterly image of a Manhattan skyline.

In Koek’s photo, the famous skyline is seen in the far right, through a curious stark metal frame, which invites you in. Looking closer, it’s part of an iconic subway car, an image he caught by strapping his camera onto his belt and stepping between two railcars as the train stopped momentarily on the Brooklyn Bridge.

For Netherlands-born Koek, stepping in-between places is familiar to him. He now lives in both Amsterdam and New York City. It’s an in-between space that, as he says, allows him to “see both countries in wonder.”

This awe carries through in Koek’s new book “New York New York: A Visual Hymn,” published by Lannoo, the majority of which was photographed in 2017 as Koek walked through New York’s five boroughs, shot by shot.

About the shots set in scenes such as two Fourth of July gatherings—one in Morningside and the other by the Brooklyn Bridge—Koek said: “It is New York. But is it New York?”

This impression is one that he gets across the five boroughs: “We don’t assimilate; we segregate,” he said. “We all work together and deal with each other monetarily … [but] what brings us all together is love and honor for the flag.” He paused, “The flag and the dollar.”

From Shots to Stories

Koek’s camera saves him from shyness, he says. So, it’s through the lens that he narrates New York’s neighborhoods.

Koek favors an invisible fly-on-the-wall approach to his work. “I don’t want to be a part of it,” he states simply. To take photos discreetly, he sometimes links his phone to a camera held overhead on a stick, so people think he’s texting. This surveillance-type approach works well in neighborhoods unfamiliar to him, until someone discovers what he’s doing.

As soon as people know he is taking pictures, or if he asks permission to take a photo, the dynamic changes, he says; people start posing or looking away.

Often, Koek doesn’t know why he takes a certain shot; he’s found that the less he analyzes, the better his work becomes. He likes to snap what’s slightly beyond the frame, often pulling back from shots to take in “the microcosmos, not just the people in the center.”

Working in this way allows the reason behind a shot to be revealed in the editing process, or he learns the reason from someone viewing the photo, Koek says. It’s a little like the romance of waiting for 35mm film to be developed.

“I have to listen to what people see,” he says, explaining that everyone relates to the images with his or her own story, and that’s the biggest compliment.

Of course, Koek has his own stories behind each shot. He recounts a church in the Bronx, empty except for a cleaning person, where he waited a long time for something to happen. His patience paid off when a small but loud entourage came in for a baptism. The noise came, not from the group, but from the priest who boomed the ceremony over the speakers to a handful of worshipers.

The resulting image is an intimate one, and these are the shots Koek feels most comfortable taking.

Koek’s “A Visual Hymn” shows a quiet adoration of New York in situ: the nature of its neighborhoods and people. Yet, like in nature, “the most beautiful pictures you can’t often photograph, ” he says.