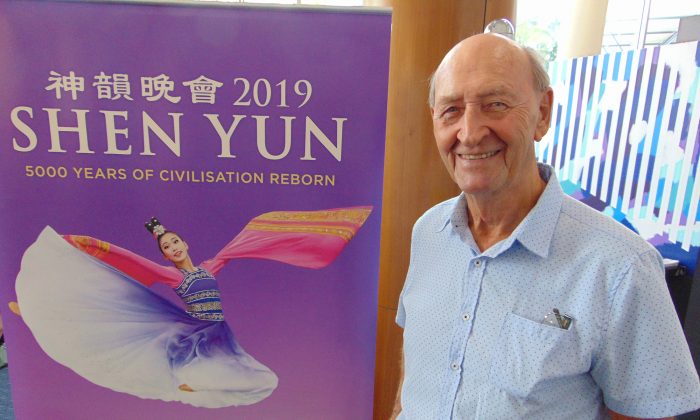 GOLD COAST, Australia—A Scandinavian maritime leader has given Shen Yun Performing Arts his highest recommendation after seeing the first performance at the Gold Coast Home of the Arts (HOTA), on March 12, 2019.

Norwegian Captain Rolf Umderdahl said his journeys had taken him to Mainland China multiple times, but he has never seen a performance showcase China’s 5,000 years of civilization like New York-based Shen Yun. He commended Shen Yun as a world-class show.

“Yes absolute[ly], there’s no doubt about that it’s so fantastic,” he said.

Umderdahl, who formerly worked as a correspondent journalist in Australia for the Norwegian press, was not only captivated by the high caliber of the performance but also the excellent use of classical Chinese dance, live orchestra combining Chinese and Western musical instruments, and 3-D animation to depict the divine origins of China.

“I like all of it, it’s beautiful, absolutely beautiful,” he said. “We have been to shows here before in HOTA [a] couple of years ago but this is the biggest one we’ve seen.”

His favorite part was the costumes.

“Fantastic show, beautiful clothes, dresses for the women, and beautiful for the men as well,” Umderdahl said. “The gymnastics, they can somersault around you know, [it is] fantastic, I love it.”

Umderdahl was also impressed by the highly acrobatic qualities of classical Chinese dance.

Shen Yun’s exciting display of dancing proved to be valuable to a young and aspiring ballerino.

Sebastian Andersen, 14, found Shen Yun to be a useful opportunity to interpret the similarities between Western and Chinese styles of dancing.

“I think they’ve weaved that together really nicely,” he said.

His favorite performance was “Restaurant Cheer,” which depicted a 100-year-old establishment where the waiters and owner all show incredible talent at spinning towels.

“All their hips were square and all the flexibility, and all the different complications with the towels and the choreography and everything was very good,” Andersen said. “I’m focusing on the technique because that’s what I do.”

He said he would definitely tell all of his friends, including at ballet school, about Shen Yun and encourage them to see it too.

“Definitely you should go and see it. I should just recommend the choreography, just take inspiration from it,” Andersen said. “The Chinese culture and how it was displayed—and it was interesting how all the dancers were trained through Chinese style of dancing and how they haven’t lost that for a long time.”

“The training is different, so you can definitely tell what they do and how they do things,” he added. “Just the waving of arms and stuff, it’s much more elegant and light and airy, and they show more personality and artistry through that as well.”

With reporting by NTD Television, Richard Szabo, and Steve Xu.