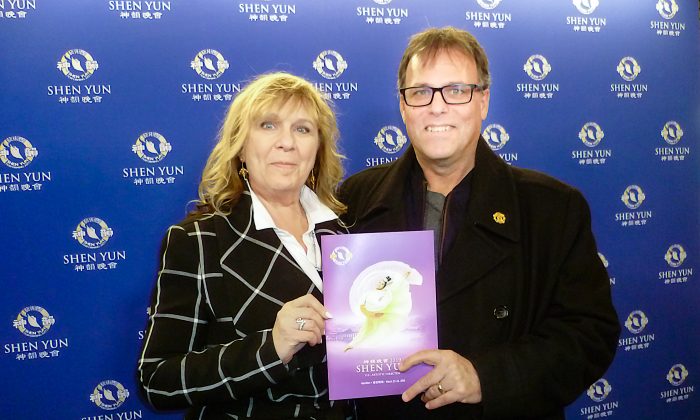 HAMILTON, Canada–Local radio personality and TV host Barbara Evoy had wanted to see Shen Yun Performing Arts for many years. She finally came on March 24, 2019 at the FirstOntario Concert Hall in Hamilton, Ontario with her husband. They were celebrating both their anniversary and her birthday.

Evoy, who is also a school trustee, an author and a business owner, among other roles, was fascinated by the performance.

“I have to give [Shen Yun] a hundred and ten percent. It is so good. I am so incredibly impressed. The details—every single detail has been addressed and addressed very well … The dancers are beyond belief,” she said.

Evoy, who used to perform, said she had an eye for the artistic details.

“Everything was so well-done. I almost cried in the scene where the girl was punished for her faith. And that moved me beyond belief. I definitely did tear up,” she said.

The scene she was referring to was “Goodness in the Face of Evil,” in which a young girl is persecuted for her faith in Falun Dafa (also known as Falun Gong), a spiritual meditation discipline based on the principles of Truthfulness, Compassion, and Forbearance.

“The [Shen Yun] choreographer really deserves kudos because I understood every single minute without even reading the program. … That was a real big moment for me in the first half,” she said.

Based in New York, Shen Yun has set out to revive the glory of China’s divinely inspired culture, developed over 5,000 years. Since its establishment in 2006, Shen Yun has toured the globe as the world’s premier classical Chinese dance and music company.

Evoy felt the spirituality reflected in all the aspects of the performance, including in the interaction of the digital backdrop with the stage.

“It’s so incredibly well-executed,” she said. “There was not a beat in time that was missed. I could see the divine [figures] coming down onto the dance floor and then leaving again. Perfectly, perfectly executed. I’m getting emotional feeling it. It was really well-done,” she said.

She also saw this spirituality in the performers themselves.

Evoy said she would definitely recommend Shen Yun to others. “Come and see this show! It’s the best,” she said.