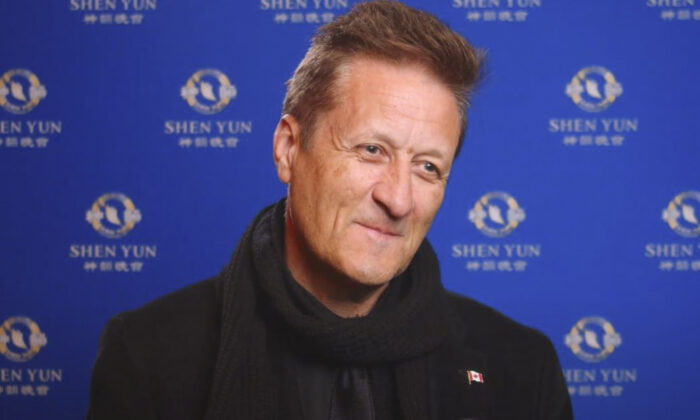 Ron Schuler, a member of the legislative assembly of Manitoba, at the Centennial Concert Hall in Winnipeg, Manitoba, Canada, on April 19, 2022. (NTD)

WINNIPEG, Canada—Ron Schuler, a member of the legislative assembly of Manitoba, was delighted by the Shen Yun performance at Centennial Concert Hall in Winnipeg on April 19.

“It was just amazing, really well-done,” he said, “I want to thank … the orchestra and all the performers for putting on a fantastic show.”

Mr. Schuler attended a Shen Yun performance in 2010 and was impressed by the company’s patented method using a 3D animated backdrop that allows seamless interaction between the background projection and the performers on stage.

“It’s as beautiful today as it was then. I’m always awed by the beauty of it,” he said.

Since Shen Yun’s inception in 2006, its mission has been to revive the traditional culture of China through music and dance and to share it with the world. The age-old culture has been on the brink of extinction since the Chinese communist regime seized power in 1949. Shen Yun says its performance this year demonstrates “China before communism.”

“I’m a big supporter of what [Shen Yun] stands for,” Mr. Schuler said. “Civil liberties—no matter at what point in time in your civilization—are fundamental. This concert today is all about civil liberties, and having rights, and standing up for what you believe in.”

Along with myths and legends from ancient times, Shen Yun presents story-based dances portraying the persecution of Falun Dafa, a meditation discipline based on the principles of truthfulness, compassion, and tolerance. In 1999, the Chinese Communist Party (CCP) launched a persecution campaign against the spiritual practice, which is also called Falun Gong, and adherents have since been subjected to unprecedented imprisonment, torture, and abuse.

“[They] really do it in a very loving way. Even some of the scenes that are a little bit tougher, [they] still do it in a very tasteful way. … But the message is clear: that is, religious freedom, civil liberties, which I stand for 100 percent.”

One dance piece depicts the crime of forced organ harvesting from Falun Dafa prisoners of conscience in China, which is part of the CCP’s persecution campaign.

Reflecting on the human rights atrocities that are being exposed through the beauty of the performance, Mr. Schuler said that these crimes must be denounced.

“Whether it’s a vaccine or whether it’s organ harvesting, … it is fundamentally your body. I really stand for civil liberties, and that’s why I appreciate so much what [Shen Yun is] doing here. It is about religious freedoms … spirituality, and civil liberties.”

‘It Is Very Uplifting’

China was once known as “The Land of the Divine” and Shen Yun presents this culture by drawing upon the Middle Kingdom’s Buddhist and Daoist philosophies. As such, the performance often includes spiritually uplifting messages, according to the company’s website.

“Coming from a very spiritual background, … I appreciate the spirituality,” said Mr. Schuler, “I like how [Shen Yun] puts it on the forefront and [their] message is very clear, very beautiful. It’s a very good message that we need spirituality in our lives.”

With regard to pandemic lockdowns and restraints over the past two years, Mr. Schuler noted how important it is for people’s mental well-being to be able to gather and attend performances like Shen Yun.

“People are very happy to be out, and it’s important. We need each other as human beings. We need to see those performances and … we need spirituality,” he said.

“We have so many mental health problems in our cities, in our communities, and it’s with spirituality that we can help to get out of those problems. Your government can’t help you with mental health issues—the best way to deal with that is through spiritual means. And the message today was absolutely beautiful.”

“I’m a people-watcher,” Mr. Schuler added. “The audience was enthralled, they were excited, and they were clapping throughout. I think people really appreciated it.

“There was a gentleman sitting next to me. He’s never been to one of these before. I said to him, ‘Wait till you see this show.’ Afterward, he said, ‘You were so right. It is so beautiful.’ And yes, it is very uplifting.”