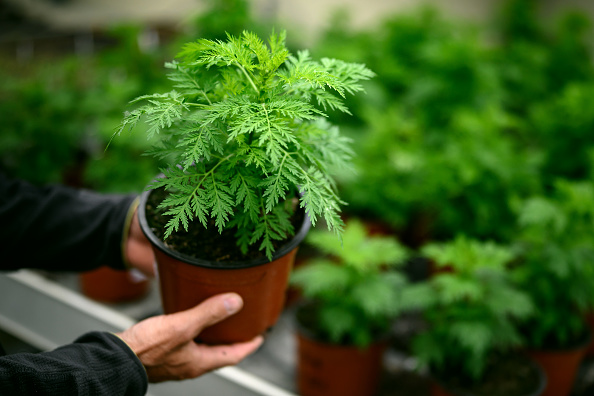 This simple herb is a powerful treatment against malaria and has been used for nearly 30 years. Researchers now find it may help inhibit the SARS-CoV-2 virus. (Photo by Fabrice COFFRINI / AFP) (Photo by FABRICE COFFRINI/AFP via Getty Images)
Health News

Can This Herb Inhibit Viral Activity?

Traditional plant-based medicine has a long history and plant-sourced medicines have largely contributed to health and Western medicine. Natural Product Insider recently reported the results of botanical research in which Artemisia annua was selected as the best herbal candidate against SARS-CoV-2.

The species belong to the largest family of flowering plants, Asteraceae. The plants enjoy temperate climates and have a strong aroma from the terpenoids common to the plant. It is an annual that prefers sunny warm conditions and grows well in temperatures between 68 degrees Fahrenheit (F) and 77 degrees F.

Artemisia has been studied as a treatment for glucose intolerance, HIV infections, pollen allergies, obesity, malaria and the treatment of some cancers. More recently, researchers have been exploring the antiviral properties of artemisia for the treatment of COVID-19.

Researchers from the Southwest College of Naturopathic Medicine in Tempe, Arizona, tested 30 herbs for the effect they may have against the virus that triggers symptoms of COVID-19. The researchers extracted the compounds using a 70% ethanol solvent and identified the metabolite artemisinin from more than 600 secondary metabolites in Artemisia annua.

Johanne Gerstel, Ph.D., a researcher at the Ric Scalzo Institute, said about the results, “We know there is activity that is inhibiting the growth of the virus. We have a novel and broad compound that has this anti-coronavirus family effect.”

According to the article in Natural Products Insider, the researchers first identified sweet wormwood as a potential option against COVID-19 and then tested different ethanol extracts to identify those with positive activity. Solvents were also tested to find the artemisinin metabolites that were effective against the virus.

This was not the first study to determine that artemisinin influences the SARS-CoV-2 virus. A recent review of the literature pulled from online databases, such as PubMed, NCBI, ResearchGate and Google Scholar, revealed Artemisia has antiviral and immune-stimulatory potential against SARS-CoV-2.

Some African countries have anecdotal evidence that an extract of the plant has helped manage COVID-19 symptoms in the population. There have been several studies that showed artemisinin had a promising role in the inhibition of viruses.

In addition, the plant has high levels of zinc, gallium and selenium. Zinc is known to stop the replication of the virus in the cell; gallium reduces forms of cytokines that raise the inflammatory response; and selenium regulates the concentration of CD4 lymphocytes.

A collaborative effort between researchers at Columbia University, University of Washington and Worcester Polytechnic Institute demonstrated that a hot water extract of Artemisia annua had antiviral activity against SARS-CoV-2. The extracts were tested on the virus propagated in human cells.

The researchers used extracts from four different continents, all of which demonstrated antiviral activity against the SARS-CoV-2. The study published in June 2021 revealed that the hot water extract of Artemisia stopped the replication of the virus, including two new variants.

Although it did not appear to block viral entry into the cell, the extract did decrease the inflammatory response and blocked infection after entry. Additionally, in this study, the extract from one dried leaf sample over 12 years old was still effective.

The data revealed that the concentrations could vary by nearly 100-fold and still be effective in the cell study. In an interview with Spectrum News 1, one of the researchers from Worcester Polytechnic Institute said:

“It’s very important right now, because we don’t have therapies, and this looks like it could be a therapy and very easy to implement globally to help us get a control on this horrible viral pandemic as you see it ravaging India.”

Yet, it is important to note there have been several therapies that have shown promise in the treatment of COVID-19, including ivermectin, hydroxychloroquine with zinc, and maintaining optimal levels of vitamin D to reduce potential infection and lower the severity of disease.

To date, researchers are still trying to determine the mechanism of action that artemisinin has against the SARS-CoV-2 virus. There has been some evidence it inhibits enzymatic activity and stimulates adaptive immunity that targets the virus and down regulates proinflammatory cytokines.

Does the WHO Recommend Artemisia?

Chinese scientists first pioneered the discovery of Artemisia annua against malaria in the 1970s. Currently, the WHO recommends artemisinin-based therapies against malaria, especially since the growth of chloroquine-resistant disease. Resistant parasites have repeatedly shortened the ability of new drugs to be effective against malaria.

Artemisinin is currently used only in combination with other antimalarial drugs to help prevent the potential resistance from monotherapy. Increased access to artemisinin-based combination therapies is believed to be a key factor in reducing the death toll from malaria in the last 15 years.

In August 2021, the World Health Organization announced that it would be testing three new drugs in the next phase of the Solidarity trial. Sponsored by the WHO, the Solidarity trials aim to study possible drugs for those hospitalized with severe COVID. The drugs approved in August are artesunate, imatinib and infliximab. Each of the drugs are approved for use in other health conditions. Artesunate is a derivative of artemisinin and currently used in the treatment of malaria.

Imatinib is used in the treatment of cancers and infliximab is prescribed for immune system conditions such as rheumatoid arthritis or Crohn’s disease. According to the WHO, artemisinin has been used extensively for the past 30 years in the treatment of malaria and other parasitic diseases.

The drug is considered very safe, and the Therapeutics Advisory Group has recommended the evaluation of artesunate because of its anti-inflammatory properties.

Long before COVID-19, researchers had isolated a class of compounds in sweet wormwood that demonstrated activity against cancer, schistosomiasis and malaria. More recently, it was discovered that the plant is bioactive against certain viruses such as cytomegalovirus, hepatitis B and C, and members of the herpes family, including herpes virus type 1 and Epstein-Barr.

Building on this and other research, scientists at the Max Planck Institute in Germany collaborated with those at Freie Universität Berlin to carry out laboratory studies evaluating the bioactive compounds in the plant against SARS-CoV-2. Peter H. Seeberger, one of two scientists who oversaw the research, commented:

“Having worked with compounds derived from A. annua plants, I was familiar with the interesting activities of the plants against many different diseases, including a range of viruses. Therefore, we felt that exploring the activity of this plant against COVID-19 was worth the undertaking.”

Seeberger was also encouraged by the international collaboration as scientists work together to find compounds that may improve the treatment and management of people with COVID-19. He said:

“Given the encouraging results of Chinese colleagues in 2005 and similarities between the new virus and the one that caused SARS, plant extracts and artemisinin derivatives need to be tested as quickly as possible. This international collaboration makes this possible.”

After demonstrating antiviral capability in the lab, researchers moved to testing sweet wormwood in a human trial. They used a cultivated line of seeds developed by ArtemiLife Inc. from Kentucky. The researchers found that when the compounds were extracted from this line, they demonstrated the strongest antiviral activity.

Klaus Osterrieder from Freie Universität Berlin conducted the activity assays in which they discovered that using an ethanolic extract of Artemisia and coffee produced the best results. When tested alone, the artemisinin didn’t demonstrate as much antiviral activity. Osterrieder found the results remarkable:

“I was surprised to find that A. annua extracts worked significantly better than pure artemisinin derivatives and that the addition of coffee further enhanced the activity.”

The U.K. launched human trials in late 2020 in collaboration with the University of Kentucky to test the effectiveness of the Kentucky-grown Artemisia annua product. In January 2021, U.S.-based Mateon Therapeutics partnered with Indian supplement manufacturer Windlas Biotech and announced a clinical trial that would test the safety and efficacy of another artemisinin supplement.

The trial is using a supplement capsule containing 500 mg of purified artemisinin against COVID-19. It was marked completed on September 9, 2021, but results have not yet been posted. If successful, these trials may mean the discovery of a treatment for COVID-19 that meets many criteria. These include being widely available, relatively inexpensive, effective and with a known safety profile.