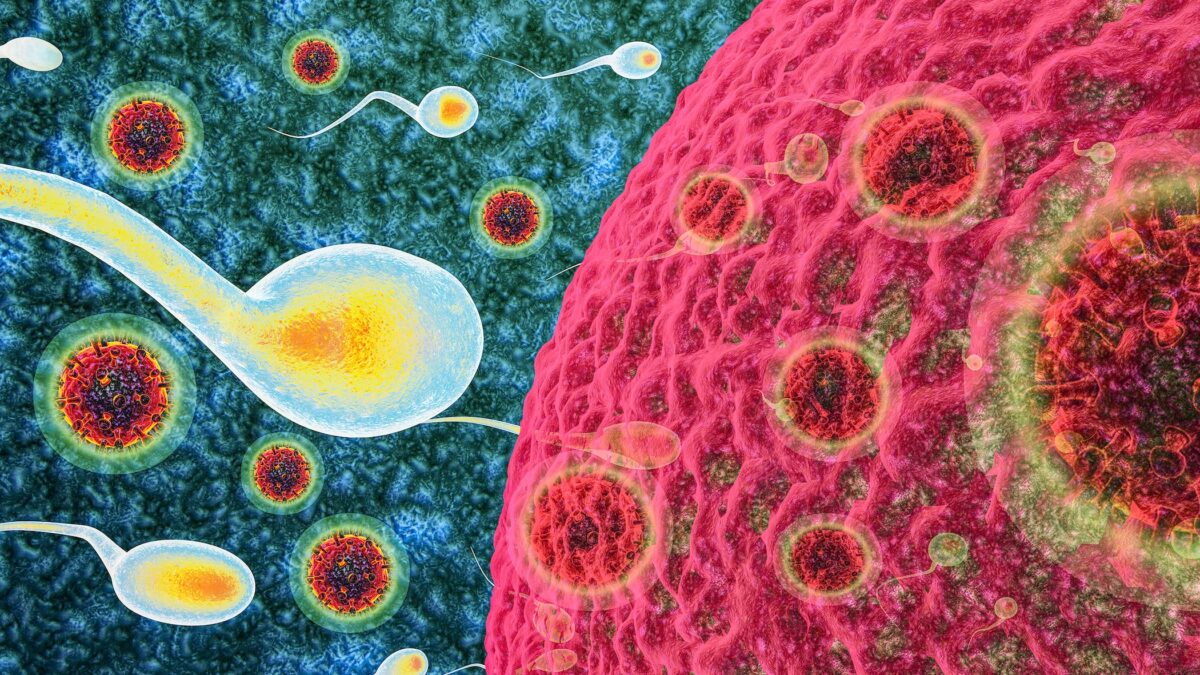 Can the COVID Vaccine Affect Fertility?

Researchers have noted that a link between the jabs and menstrual changes are plausible. Here’s what the findings say.

Women across the U.S. have reported changes in their menstrual cycles following COVID-19 shots. Changes include heavier, earlier and more painful periods,[1] as well as unexpected breakthrough bleeding or spotting among women on long-acting contraception or those who are postmenopausal and hadn’t had a period in years or even decades.[2] Health officials have tried to brush off the reports, but they’ve become too numerous to ignore.

Kate Clancy, a human reproductive ecologist and associate professor of anthropology at the University of Illinois Urbana-Champaign, and Katharine Lee, a biological anthropologist studying women’s health at Washington University School of Medicine in St. Louis, have more than 140,000 reports from those who’ve had changes in their period following COVID-19 injections, which they’re formally documenting in an open-ended study.[3]

Another 30,000 reports of period changes following the jabs have been reported to the U.K.’s regulator.[4] The implication is that the shots could be having an effect on fertility, but in order to keep people lining up for shots, no questions asked, officials have been quick to deny such a link.

The University of California, Davis, even went so far as to say that the tens of thousands of women who have reported menstrual changes following the injections are simply stressed out.

“[A] woman’s ovulation and menstrual cycle can be affected by stress. Stress may be the reason for any effect on menstruation. We do not believe there is any physiologic reason why the vaccine itself would affect a woman’s menstrual cycle,” wrote Clara Paik, clinic medical director of obstetrics and gynecology at UC David.[5]

It’s as though we’ve been transported back to the 18th and 19th centuries, when women were commonly diagnosed with “hysteria” to explain away any symptoms that doctors didn’t understand.[6] Fortunately, not everyone is OK with brushing off nearly 200,000 reports of shot-induced menstrual changes as “stress.”

In an editorial published in the BMJ, Victoria Male, a lecturer in reproductive immunology at Imperial College London, stated that when it comes to menstrual changes after COVID-19 shots, “A link is plausible and should be investigated.”[7] According to Male:[8]

“Menstrual changes have been reported after both mRNA and adenovirus vectored covid-19 vaccines, suggesting that, if there is a connection, it is likely to be a result of the immune response to vaccination rather than a specific vaccine component. Vaccination against human papillomavirus (HPV) has also been associated with menstrual changes.

… Biologically plausible mechanisms linking immune stimulation with menstrual changes include immunological influences on the hormones driving the menstrual cycle or effects mediated by immune cells in the lining of the uterus, which are involved in the cyclical build-up and breakdown of this tissue.

“Information about menstrual cycles and other vaginal bleeding should be actively solicited in future clinical trials, including trials of covid-19 vaccines,” she said.[9]

Why It Takes so Long to Recognize Side Effects

Clancy and Lee started their survey after personally experiencing abnormal menstruation following their COVID-19 shots. It wasn’t until they posted their experiences online that hundreds of other women spoke up about their similar experiences.

One woman who experienced abnormal bleeding after not having a period for 1.5 years due to an IUD said, “I didn’t really think that it was anything until I saw that someone had said that, that it might’ve been a symptom or a side effect of the vaccine. It was like, ‘Oh, that’s interesting.’”[10]

Meanwhile, many doctors are brushing off their patients’ concerns instead of listening to them. Contradicting Male’s BMJ editorial, Dr. Rakhi Shah, an OB-GYN at Northwestern Medicine Delnor Hospital, told the Chicago Tribune:[11]

“I think that there’s really no biological mechanism that is plausible in terms of how that could be possible. I think that potentially people are having normal menstrual pain plus the aches and pains that are associated post-vaccine, and maybe combining all of that together and associating it.”

Dr. Julie Levitt, an OB-GYN at Northwestern Medicine, had two patients who experienced menstruation changes after the shots, but also brushed it off, stating, “Bleeding occurs for so many reasons that it’s really hard to isolate the two,” and suggesting that women shouldn’t worry about it and, “If it does continue after a few weeks following the administration of the vaccine, it probably is something else.”

It’s premature to brush off women’s reports, however, especially since long-term research on the shots’ effects on menstruation and fertility hasn’t been conducted. In late August 2021, the U.S. National Institutes of Health awarded $1.67 million in grants to five institutions to study links between COVID-19 shots and menstrual changes.[12] According to the NIH:[13]

“Researchers will assess the prevalence and severity of post-vaccination changes to menstrual characteristics including flow, cycle length, pain and other symptoms. These analyses will account for other factors that can affect menstruation — such as stress, medications and exercise — to determine whether the changes are attributable to vaccination.

Several projects also seek to unravel the mechanisms underlying the potential effects of COVID-19 vaccines on the menstrual cycle by examining immune and hormonal characteristics in blood, tissue and saliva samples taken before and after COVID-19 vaccination.”

Your body recognizes the spike protein in COVID-19 jabs as foreign, so it begins to manufacture antibodies to protect you against COVID-19, or so the theory goes. But there’s a problem. The spike protein itself is dangerous and known to circulate in your body at least for weeks and more likely months[14] — perhaps much longer — after the COVID jab.

In your cells, the spike protein damages blood vessels and can lead to the development of blood clots.[15] It can go into your brain, adrenal glands, ovaries, heart, skeletal muscles and nerves, causing inflammation, scarring and damage in organs over time.

In fact, Pfizer’s biodistribution study, which was used to determine where the injected substances go in the body, showed the COVID spike protein from the shots accumulated in “quite high concentrations” in the ovaries.[16]

The focus of the meeting was blood clotting disorders following COVID-19 shots, and Lindsay spoke during the public comment period, calling for “all gene therapy vaccines” to “be halted immediately due to safety concerns on several fronts.” Fertility concerns were among them. Lindsay stated:[17]

Respected virologist Dr. Bill Gallaher, Ph.D., made excellent arguments as to why you would expect cross reaction. Due to beta sheet conformation similarities between spike proteins and syncytin-1 and syncytin-2. I have yet to see a single immunological study which disproves this.

Despite the fact that it would literally take the manufacturers a single day to do these syncytin studies to ascertain this [once they had serum from vaccinated individuals]. It’s been over a year since the assertions were first made that this [the body attacking its own syncytin proteins due to similarity in spike protein structure] could occur.”

An Entire Generation Could Be Sterilized

Lindsay also noted that 100 pregnancy losses have been reported to the Vaccine Adverse Event Reporting System (VAERS) in the U.S. as of April 9, 2021, which also demands that COVID-19 shots be halted. Other concerning reports following COVID-19 injections include impaired spermatogenesis and placental findings, implicating a syncytin-mediated role.[18]

Lindsay warned that these red flags are severe enough that an entire generation could be a risk of sterilization if COVID-19 shots aren’t stopped until more research is conducted:[19]

“We simply cannot put these [vaccines] in our children who are at .002% risk for Covid mortality, if infected, or any more of the child-bearing age population without thoroughly investigating this matter.

[If we do], we could potentially sterilize an entire generation. Speculation that this will not occur and a few anecdotal reports of pregnancies within the trial are not sufficient proof that this is not impacting on a population-wide scale.”

Investigative journalist Jennifer Margulis contacted Lindsay after the meeting to see what additional information she had that she was not allowed to present due to the three-minute time restriction. In a written response, Lindsay said:[20]

“There is strong evidence for immune escape and that inoculation under pandemic pressure with these leaky vaccines is driving the creation of more lethal mutants that are both newly infecting a younger age demographic, and causing more COVID-related deaths across the population than would have occurred without intervention. That is, there is evidence that the vaccines are making the pandemic worse.”

The menstrual changes being experienced by women following COVID-19 shots are highlighting another scientific gap, one that relates to women’s health in general, which has not been a research priority for the last two decades, Dr. Sarah Gray, a general practitioner in Cornwall, England, said in a news release.[21]

“The control of menstrual bleeding is complex with potential effects from the brain, ovaries, and uterus itself. It is plausible that the effects of either [SARS-CoV-2] infection or vaccination on the immune system could affect this control pathway, and any research would be greatly valued,” she said.[22] It’s also an urgent matter that must be investigated so people can make an informed decision before consenting to an injection that could have serious reproductive effects.