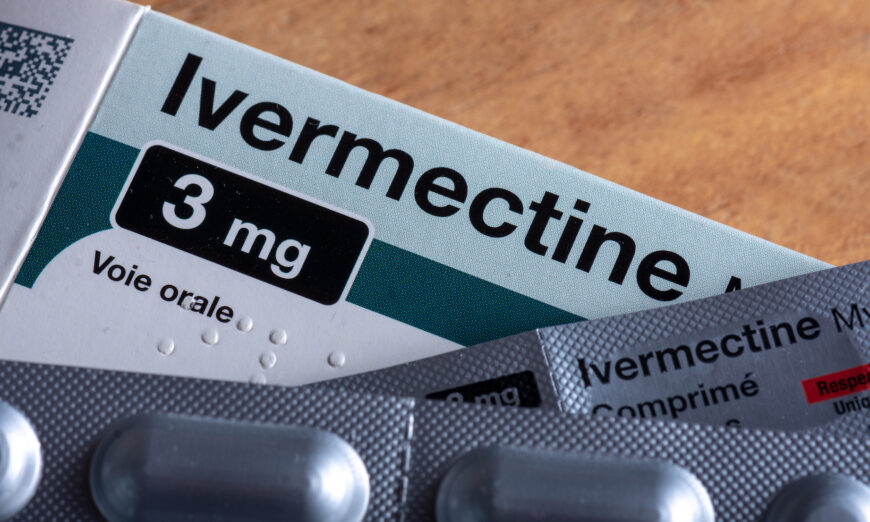 Research into ivermectin suggested it held promise as a treatment for COVID-19, at least until a controversial review deemed otherwise.(HJBC/Shutterstock)

When it comes to the treatment of COVID-19, many Western nations have been hobbled by the politicization of medicine. Throughout 2020, media and many public health experts warned against the use of hydroxychloroquine, despite the fact that many practicing doctors were praising its ability to save patients. Many of them were silenced through online censorship. Some even lost their jobs for the “sin” of publicly sharing their successes with the drug.

Another decades-old antiparasitic drug that offers great hope is ivermectin, but it too is being hushed up by mainstream media. Trial Site News1 tells the story of a 77-year-old Indian couple, both of whom became ill with COVID-19. One successfully recuperated following treatment with hydroxychloroquine. The other with ivermectin.

While ivermectin certainly appears to be a useful strategy, which is why I am covering it, please understand it is not my primary recommendation. You need vitamin D for a wide variety of functions in your body in addition to optimizing your immune response. Although ivermectin is a relatively safe drug, it is still an unnatural synthetic chemical that can have side effects. Vitamin D is something your body absolutely requires for optimal health, which is why I would encourage you to focus on vitamin D first.

Getting back to ivermectin, Trial Site News reported2 that “Ten months into its battle with the SARS-CoV-2 virus, India is on track to become an unexpected warrior in the fight against this global pandemic. Although the densely-populated nation has four times the population of the U.S., India has less than half the U.S. COVID deaths.”

While India had a daily positive test rate of nearly 100,000 back in September 2020, by the end of December 2020, the infection rate had dropped by 75%. While this rapid decline is by and large being attributed to strict lockdowns, universal mask wearing and extensive contact tracing and testing, the availability and use of effective treatments likely plays a pivotal role.

In late March 2020, India added hydroxychloroquine to its national treatment guidelines, urging the drug be used “as early in the disease course as possible.” It was not recommended for those hospitalized with severe illness.

Then, in August 2020, India’s largest state, Uttar Pradesh, which has some 230 million residents, added ivermectin to its recommendations and distributed the drug for home care free of charge. The state of Bihar, which has 128 million residents, also started recommending ivermectin, and by the end of 2020, Bihar and Uttar Pradesh had the lowest and second-lowest COVID-19 fatality rates in all of India.

Uttar Pradesh, however, took it a step further than Bihar. They also used ivermectin as a prophylactic, first among health care workers and then among people who had come in contact with a person who tested positive.

This drug makes far more sense in India as the vast majority of the population indeed suffer with parasites as a result of largely contaminated municipal water supplies.

In the U.S., the Frontline COVID-19 Critical Care Alliance (FLCCC) is now calling for widespread adoption of ivermectin, both as a prophylactic and for the treatment of all phases of COVID-19.3 4

“The data shows the ability of the drug ivermectin to prevent COVID-19, to keep those with early symptoms from progressing to the hyper-inflammatory phase of the disease, and even to help critically ill patients recover.” ~ FLCCC Alliance

December 8, 2020, FLCCC president Dr. Pierre Kory, former Chief of the Critical Care Service and Medical Director of the Trauma and Life Support Center at the University of Wisconsin, testified before the Senate Committee on Homeland Security and Governmental Affairs, where he reviewed the evidence supporting the use of the drug. (He resigned from the University of Wisconsin Medical Center shortly after giving this testimony, saying the medical center wanted to restrict his freedom of speech.5) As noted on the FLCCC website:6

“The data shows the ability of the drug iIvermectin to prevent COVID-19, to keep those with early symptoms from progressing to the hyper-inflammatory phase of the disease, and even to help critically ill patients recover.

Dr. Kory testified that ivermectin is effectively a ‘miracle drug’ against COVID-19 and called upon the government’s medical authorities — the NIH, CDC, and FDA — to urgently review the latest data and then issue guidelines for physicians, nurse-practitioners, and physician assistants to prescribe ivermectin for COVID-19.”

January 6, 2020, Kory and Dr. Paul Marik, chief of pulmonary and critical care medicine at Eastern Virginia Medical School in Norfolk, Virginia — both are founding members of FLCCC — also presented evidence to the National Institutes of Health COVID-19 Treatment Guidelines Panel, which is working to update NIH guidance.7 The NIH panel is expected to update treatment guidelines by early February 2021. According to the FLCCC:8

“Numerous clinical studies — including peer-reviewed randomized controlled trials — showed large magnitude benefits of ivermectin in prophylaxis, early treatment and also in late-stage disease. Taken together … dozens of clinical trials that have now emerged from around the world are substantial enough to reliably assess clinical efficacy.

A one-page summary9 of the clinical trial evidence for ivermectin can be downloaded from the FLCCC website. A more comprehensive review10 of trials data has been published in the journal Frontiers of Pharmacology. A listing of all the ivermectin trials done to date, with links to the published studies, can be found on c19Ivermectin.com.11

How Ivermectin Protects Against COVID-19

Like hydroxychloroquine, ivermectin is an antiparasitic drug with a well-documented safety profile and “proven, highly potent, antiviral and anti-inflammatory properties.”12 It’s been on the market since 1981 and is on the World Health Organization’s list of essential medicines. It’s also inexpensive, with a treatment course costing less than $2 in countries such as India and Bangladesh.13

While the U.S. FDA has not yet approved ivermectin for prevention of or treatment for SARS-CoV-2,14 studies have shown ivermectin:15

The FLCCC website also has a helpful FAQ section16 where Kory and Marik answer common questions about the drug and its recommended use. While FLCCC members have been criticized for their insistence that we should not wait for randomized controlled trials before using Ivermectin more widely, the group argues that the drug has a long history of safety and clearly works, so, why wait?

“If someone … says they want to do an RCT with placebo, that’s problematic for me,” Kory told Medpage Today.17 “I could not have a patient admitted to my care and give placebo knowing what I know about ivermectin.”

One week after Kory and Marik presented their data, the National Institutes of Health updated their stand18 on use of the drug with a statement that they would not recommend for or against it. The FLCCC quickly followed up with their own statement:19

“By no longer recommending against ivermectin use, doctors should feel more open in prescribing ivermectin as another therapeutic option for the treatment of COVID-19. This may clear its path towards FDA emergency use approval.”

While a 75% reduction in mortality is impressive enough (which is the average reduction based on 18 trials according to the FLCCC20), a WHO-sponsored review21 suggests ivermectin can reduce COVID-19 mortality by as much as 83%. As reported by Swiss Policy Research:22

“This result is based on in-hospital trials, so it does not yet take into account early ambulatory and prophylactic treatment. The authors of the review intend to include three more trials, due to be published sometime in January, before providing a final conclusion.”

In the video above, Dr. Andrew Hill of the Department of Pharmacology at the University of Liverpool, U.K., who is leading this review, discusses the preliminary findings. At the end, he too describes ivermectin as a potentially transformative treatment against COVID-19.

While preliminary evidence seems to suggest ivermectin can be useful at all stages of SARS-CoV-2 infection, its real strength appears to be prophylactic. December 26, 2020, Dhaka Tribune23 reported the findings of an observational study24 from Bangladesh, which looked at ivermectin as a pre-exposure prophylaxis for COVID-19 among health care workers.

Fifty-eight volunteers took 12 mg of ivermectin once per month for four months. Only four (6.96%) came down with mild COVID-19 symptoms during the May through August 2020 trial period. In comparison, 44 of 60 health care workers (73.3%) who had declined the medication were diagnosed with COVID-19.

Both groups worked with COVID-19 positive patients at the Bangladesh Medical College Hospital. Lead researcher Mohammed Tarek Alam told Dhaka Tribune that ivermectin is “apparently very effective as a preventive drug.” His team will be seeking permission to conduct a randomized control trial to validate their findings.

It’s worth noting that while the FLCCC is encouraging the use of ivermectin as a prophylactic and early at-home treatment, they also have a more comprehensive early treatment protocol available, as well as an in-hospital protocol.

The treatment protocol was initially dubbed MATH+ (an acronym based on the key components of the treatment), but after several tweaks and updates, the prophylaxis and early outpatient treatment protocol is now known as I-MASK+25 while the hospital treatment has been renamed I-MATH+,26 due to the addition of the drug ivermectin.

Vitamin C — which has important antioxidant, anti-inflammatory and immunomodulating effects27 — is a central component of this treatment. As noted in a recent landmark review28 on vitamin C for COVID-19, it’s common for hospitalized patients to have overt vitamin C deficiency. This is particularly true for older patients and those hospitalized for respiratory infections.

The two protocols (I-MASK+29 and I-MATH+30) are available for download on the FLCCC website in multiple languages. The clinical and scientific rationale for the I-MATH+ hospital protocol has also been peer-reviewed and was published in the Journal of Intensive Care Medicine31 in mid-December 2020.

Nebulized peroxide is a home remedy I recommend everyone familiarize themselves with, as in many cases it can improve symptoms in mere hours.

Nebulizing hydrogen peroxide into your sinuses, throat and lungs is a simple, straightforward way to augment your body’s natural expression of hydrogen peroxide to combat infections and can be used both prophylactically after known exposure to COVID-19 and as a treatment for mild, moderate and even severe illness.

Dr. David Brownstein, who has successfully treated over 100 COVID-19 patients with nebulized peroxide, published a case paper32 about this treatment in the July 2020 issue of Science, Public Health Policy and The Law. He also reviews its benefits in “How Nebulized Peroxide Helps Against Respiratory Infections.”

Nebulized hydrogen peroxide is extremely safe, and all you need is a desktop nebulizer and food-grade hydrogen peroxide, which you’ll need to dilute with saline to 0.1% strength. I recommend buying these items beforehand so that you have everything you need and can begin treatment at home at the first signs of a respiratory infection. In the video above, I go over the basics of this treatment.

The nebulizer I use is the Pari Trek S Compressor Aerosol System. The large battery option is unnecessary as you can simply plug in the device to run it when you need it. There are likely other nebulizers you can use instead, as long as it plugs into an electrical outlet and doesn’t use batteries, as they are low-powered and ineffective nebulizers that don’t work as well.