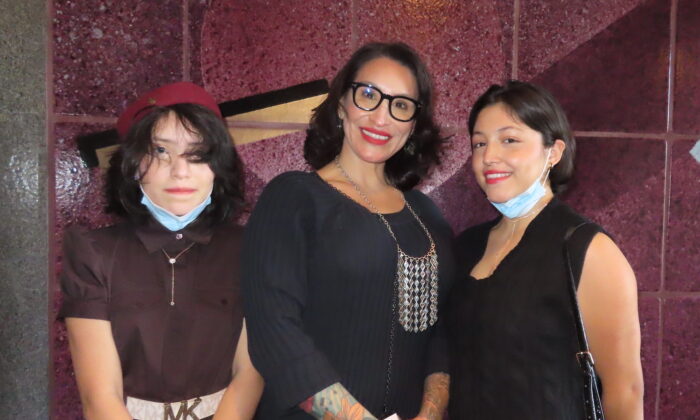 Faith Garcia and her daughters at the April 29 matinee of Shen Yun in Palm Desert, Calif. (Alice Sun/The Epoch Times)

PALM DESERT, Calif.—On the afternoon of April 29, audiences found an all-enveloping love and healing at a Shen Yun performance. Shen Yun is a classical Chinese dance and music company based in New York that tours the world’s most prestigious theaters annually.

Faith Garcia, a fitness studio owner, attended her first Shen Yun performance with her husband and two of her daughters. After seeing the performance, she wanted to bring the rest of their six children.

She appreciated the fluidity and stamina of the dancers, as well as their control of expression.

Shen Yun presents stories infused with the spiritual traditions of ancient China. As a Christian, Ms. Garcia resonated with the “love, kindness, compassion, [and] morals” presented in Shen Yun’s pieces.

The overarching message she took from Shen Yun is hope.

“Everybody has a different story, but at the end of the day—compassion—we should all have it. We should all have compassion [for] each person’s story and implement that on a daily walk because that’s what the Creator, the Divine is: compassionate, loving, listening.”

Retired marine Kurt Stermer and his wife, nurse Misti Stermer, also attended the April 29 matinee. He is a fan of Chinese culture and she a fan of ballet and dance, giving their first outing to Shen Yun special significance.

“You could see how they show their talent and their exquisite precision in their [dance],”  Ms. Stermer said. “I don’t even I don’t even have the words.”

“The music is very soothing, and healing,” Mr. Stermer said. As a former Marine of 20 years, Mr. Stermer went to China and Okinawa and has a love for Asian culture.

“I presently do Chi Gong and Tai Chi. So the music has a lot of soothing capabilities,” he said. “I have certain conditions and the music helps me to relax, you know, meditative-type calming sounds.”

Mr. Stermer suffers from post-traumatic stress disorder, and so the soothing music of Shen Yun‘s East-meets-West orchestra especially impacted him. In ancient China, as the emcees explain, music was used in healing, the five-tone scale was thought to correspond to the five elements and the five major organs of the body.

“This was very uplifting, uplifting, entertaining, and you know, and at the same time, cultural,” he said.