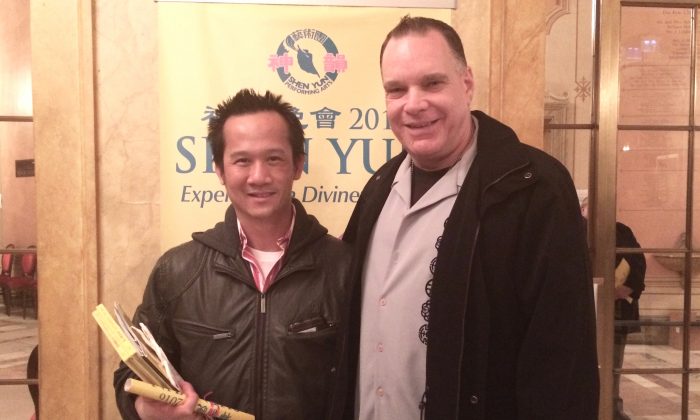 Stephen Hart and Hanson Vu, buddies who work together, attend Shen Yun Performing Arts together every year. At at the Academy of Music in Philadelphia on Jan. 9, 2016. (Irene Luo/Epoch Times)

PHILADELPHIA—There are fans, and then there are folks who buy front row tickets to the same performance four years in a row. Stephen Hart and Hanson Vu, buddies who work in a local newspaper union, belong firmly in the latter category.

Clutching a handful of Shen Yun paraphernalia after the performance on Saturday evening, Mr. Vu explained how he had been so enraptured by the performance that he and Mr. Hart decided to make an annual tradition of it.

He and Mr. Hanson work together in the union that in part handles the packaging and delivery of The Philadelphia Inquirer and the Philadelphia Daily News, the largest broadsheet and tabloid respectively in the city.

“Basically, this show—we understand it’s the original culture, and we learn what they think, what their emotions are, everything—the Chinese way,” Mr. Vu said.

Shen Yun explains in its program booklet that “Nowhere else can you see the authentic Chinese culture that Shen Yun presents … China’s ancient civilization was, in fact, deeply spiritual. Traditional Chinese culture is based on the idea of harmony among Heaven, Earth, and humankind.”

“They use their dance to show Chinese feeling,” Mr. Vu said. He hails from South Vietnam, and noted how Vietnamese language and culture has been heavily influenced by China throughout history.

“We really enjoy it. We’ll come back next year. They do it very well, very differently, and very naturally,” Mr. Vu said. “I don’t know how to describe it with words.”

“Yes, yes, yes, it always gives you hope and happiness,” Mr. Hart said. “I always say that the dancers are amazing, and the feeling in the atmosphere—it’s a good feeling.”

Mr. Hart noted that while they change the show every year, he’d still buy front row seats each time if they didn’t. “I’d like to go see them in New York City sometime,” he mused.