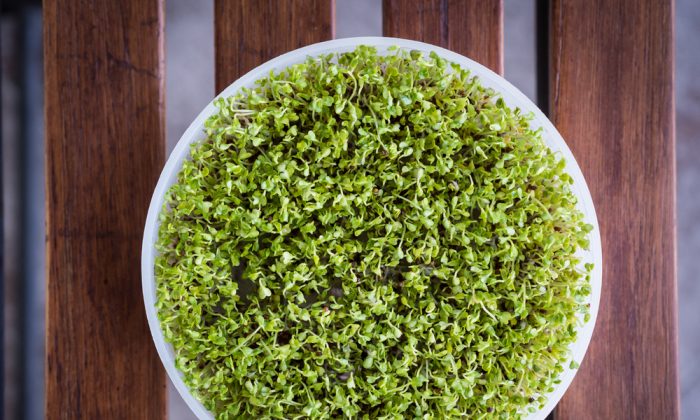 Early evidence suggests an extract found in broccoli sprouts can protect people at high risk for head and neck cancer.

The compound, called sulforaphane, was tested in mice and a small group of people. A larger clinical trial is planned.

Sulforaphane is found in high concentrations in cruciferous vegetables such as broccoli, cabbage, and garden cress.

Sprout Your Way to Better Health

“People who are cured of head and neck cancer are still at very high risk for a second cancer in their mouth or throat, and, unfortunately, these second cancers are commonly fatal,” says Julie Bauman, co-director of the University of Pittsburgh Medical Center’s Head and Neck Cancer Center of Excellence and lead author of the study.

“So we’re developing a safe, natural molecule found in cruciferous vegetables to protect the oral lining where these cancers form.”

Bauman collaborated with Daniel E. Johnson, professor of medicine, to test sulforaphane in the laboratory. For several months, Johnson and his team gave sulforaphane to mice predisposed to oral cancer and found that it significantly reduced the incidence and number of tumors.

“The clear benefit of sulforaphane in preventing oral cancer in mice raises hope that this well-tolerated compound also may act to prevent oral cancer in humans who face chronic exposure to environmental pollutants and carcinogens,” says Johnson.

Bauman treated 10 healthy volunteers with fruit juice mixed with sulforaphane-rich broccoli sprout extract. The volunteers had no ill-effects from the extract and protective changes were detectable in the lining of their mouths, meaning it was absorbed and directed to at-risk tissue.

These findings were enough to prompt a clinical trial that will recruit 40 volunteers who have been curatively treated for head and neck cancer. The participants will regularly take capsules containing broccoli seed powder to determine if they can tolerate the regimen and whether it has enough of an impact on their oral lining to prevent cancer. From there, larger clinical trials could be warranted.

“We call this ‘green chemoprevention,’ where simple seed preparations or plant extracts are used to prevent disease,” says Bauman. “Green chemoprevention requires less money and fewer resources than a traditional pharmaceutical study, and could be more easily disseminated in developing countries where head and neck cancer is a significant problem.”

Additional researchers from the University of Pittsburgh and Johns Hopkins University collaborated on the study, which was announced recently at the American Association for Cancer Research Annual Meeting in Philadelphia.

*Image of “broccoli sprouts” via Shutterstock