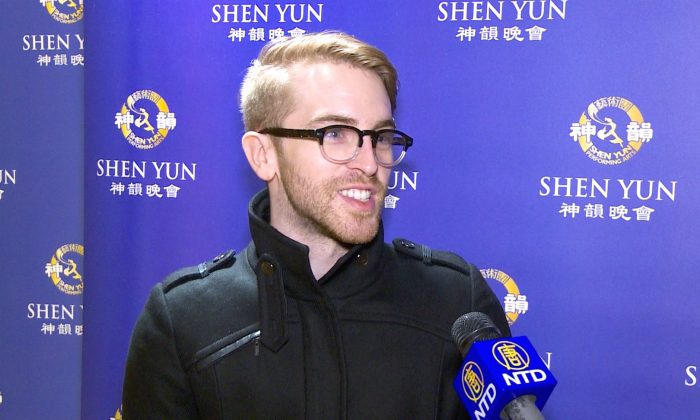 Mr. Brandt, an assistant to a producer of shows, including Broadway hits, Annie and Mothers and Sons, loved watching the performance.

One of the pieces, Handkerchief Blossoms, a folk dance from Northeastern China, features young ladies spinning pink handkerchiefs in a wintry background.

Mr. Brandt marveled at the “inwardness and gentleness of the Chinese culture” that also drew the audience in and told a story. It was different from the dance he was familiar with and the musicals that he worked on.

Shen Yun revives the classical Chinese dance form that is built on profound traditional aesthetics and 5,000 years of rich culture and history. It has a strict set of training methods and involves combinations of leaps, turns, flips, spins, and other aerial and tumbling techniques, according to Shen Yun’s website.

The performing arts company was established in 2006, outside of China, with the mission of spreading traditional art.

“It’s the smallest movements, yet they reflect something so large at the same time,” said Mr. Brandt quietly, “It’s a wonderful experience to watch.”