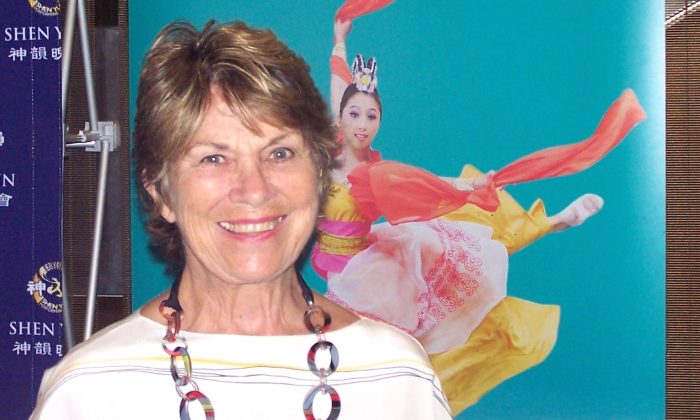 “It was wonderful, it was fantasy, humour, myth and legend, Chinese history. I loved it, it was really good,” she said.

Shen Yun, based in New York, was formed in 2006 by a team of talented Chinese artists who wished to reawaken China’s 5,000-year authentic cultural heritage through the performing arts and share it with the world.

Ms. Newsman, who hosts the popular Brisbane radio show for the aged, Silver Memories, attended the first of three performances.

“A totally beautiful experience, I enjoyed every part of it,” Ms. Newman said. “I loved listening to the opera singers and I thought it was good to see the messages they were conveying … it was really good having the translation.”

To assist listeners, English subtitles were projected onto the backdrop screen behind the singers who were singing lyrics “brimming with philosophical reflection, containing deep layers of meaning,” says the Shen Yun website.

“A wonderful performance, I enjoyed every bit of it, every performer, every dancer. So unique, so talented and wonderful to be bringing [Chinese] history to our country.”

She felt the Shen Yun performance had a healing quality.

“The fact that you can do such healing with dance and with music is wonderful,” she said.

Hotel manager Luiz Prebianca was struck by the spiritual depth of ancient China unfolding before his eyes. He was grateful Shen Yun brought a piece of China’s true heritage to Australia and regrets the performance will never be seen in China.

“The show was beautiful, it is really great to be immersed in Chinese culture … and to see that here in Brisbane is just amazing, I loved it,” he said.

To see that here in Brisbane is just amazing, I loved it.
— Luiz Prebianca
The highlight for Mr. Prebianca was mini drama where a Falun Dafa practitioner showed compassion towards a policeman who was trying to beat him and arrest him.

Many audience members were surprised to learn of the persecution of the spiritual meditation form, but Mr. Prebianca already knew because he had several friends from China, he said.

For thousands of years, Buddhist, Taoist, and other disciplines were at the heart of society, the Shen Yun website explains.

“Calligraphy, music, medicine, attire, and much more were said to have been passed down from the heavens.

“Unfortunately, over its past 60 years of rule, the communist regime [CCP] has treated traditional Chinese values—centered on the idea of harmony between heaven and earth—as a threat to its existence.

“Systematic campaigns like the Cultural Revolution, it has uprooted traditional beliefs and destroyed ancient treasures–bringing traditional 5,000 years of civilization to the brink of extinction.”

He said. “I have many Chinese friends and they don’t really talk much about their spirituality, especially about Falun Dafa which is something I think is really special.”

Falun Dafa, also called Falun Gong, is a spiritual practice rooted in ancient Chinese culture that includes meditation and a moral philosophy based on truthfulness, compassion, and tolerance, according to the website.

Mr. Prebianca is originally from Brazil. He won the Accommodation Association of Australia’s Achievers’ Awards Best Department Manager in 2013. He said he was feeling aggravated that Shen Yun could not be performed in China.