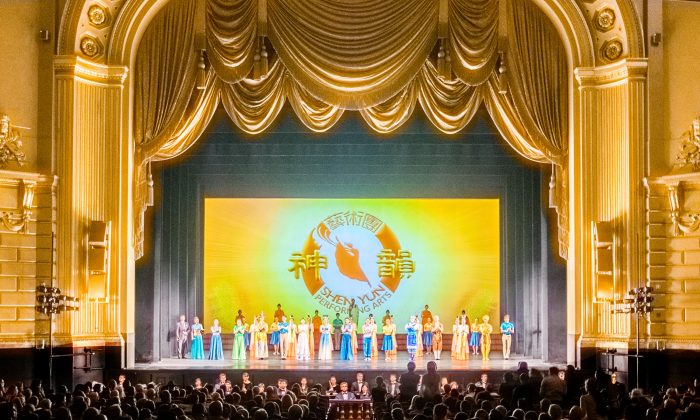 SAN FRANCISCO—Joe and Debbie Piazza attended Shen Yun Performing Arts’ sold-out evening performance at the War Memorial Opera House and were appreciative of the opportunity to experience a different culture. They look forward to the day New York-based Shen Yun can perform in China.

“I think obviously the colors are fantastic and the costumes are fantastic. The style, from a cultural standpoint—I think it’s just great to appreciate a different culture than ours,” said Mr. Piazza, who is one of the top 1 percent producing realtors in Silicon Valley and Northern California, with Alain Pinel Realtors.

As Shen Yun’s website states, “Through the universal language of music and dance, Shen Yun weaves a wondrous tapestry of heavenly realms, ancient legends, and modern heroic tales, taking you on a journey through 5,000 years of Chinese culture. Its stunning beauty and tremendous energy leave audiences uplifted and inspired.”

Mrs. Piazza, who works as an interior designer, added that she appreciated the traditions presented by Shen Yun.

I loved the art and costumes and the colors.
— Debbie Piazza

As an interior designer, she appreciated the colors and costumes.

“I loved the art and costumes and the colors. It’s really nice. Everything was fantastic,” she said.

Mr. and Mrs. Piazza both appreciated Shen Yun’s mission to revive China’s 5,000 years of traditional culture through music and dance.

“I appreciate the artistic form of it,” said Mrs. Piazza. “They’re just trying to express something that they’re not able to express there. I think the fact that they’re trying to keep [the tradition of it] in form for something to share with everybody is a really good experience.”

Shen Yun’s program states, “Nowhere else can you see the authentic Chinese culture that Shen Yun presents. Sadly, this culture has been almost completely destroyed in China under communist rule.”

The program book adds, “Yet in 2006, a group of artists in New York formed Shen Yun and have brought this culture back from the brink of extinction. Even today, Shen Yun is not allowed to perform in China—but the company is now sharing this heritage with millions around the world.”

“I enjoyed the art expression of it all. I appreciate the fact that they’re trying to share something that they’re not able to share at home, here for other people to view,” said Mrs. Piazza.

“The spiritual message that came through was very strong,” she said. “Their conviction for trying to keep with the tradition and sharing that is fantastic.”

Mr. Piazzo, on the other hand, is eager to see Shen Yun touring mainland China.

“Bring it to China!” he exclaimed.