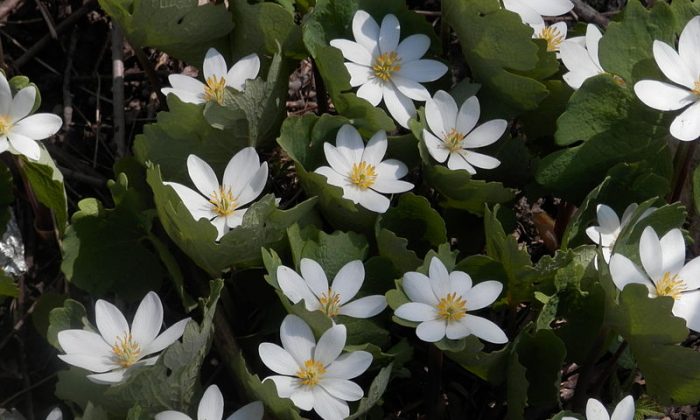 Tales of a controversial remedy
By Conan Milner
biggersmaller
Print

Bloodroot is an herb native to the eastern United States. It is widely planted as an ornamental, but has become endangered in the wild. It has a daisy-like flower that blooms in early spring and a round, ornate leaf. The name comes from the rhizome that appears to ooze blood when cut.

In addition to medicine, American Indians used bloodroot as a source for red dye. Bloodroot was first promoted in modern medicine in the 1850s by British physician Dr. J.Weldon Fell, who identified it as a secret cancer remedy. Fell credits his knowledge of bloodroot to tribes living near Lake Superior.

Today, several bloodroot-based pastes are available over the Internet. But do they work and are they safe? There are no randomized clinical trials to provide answers, but there are several stories to consider. One of the most respected comes from Dr. Frederic Mohs.

Mohs first performed his treatment strategy using bloodroot for skin cancer in 1936. By the 1960s, he had refined a technique that could completely remove growths and tumors with a near 100 percent success rate, while preserving healthy tissue better than conventional surgery. The secret is Mohs’s patented paste—a mixture of zinc chloride and bloodroot.

Mohs’s technique fell out of favor by the 1970s with the rise of modern methods. But according to dermatologists at the Skin Cancer Foundation, Mohs’s protocol is still “the most precise, tissue-sparing method for the treatment of basal cell and squamous cell carcinomas, the most common cancers in the United States.”

A key aspect of the Mohs method is that the doctor performing it must inspect tissue samples throughout the process. This determines where cancer cells may still remain following a dose of the medicated paste. Where cancer is detected, minor surgery is necessary.

Mohs’s method is a painstaking process that requires a well-trained practitioner. Many of the mishaps associated with self-treatment of bloodroot involve people who did not understand the limits of the medicine and experienced a return of the cancer.

A much less controversial use of bloodroot is for the removal of benign skin growths, such as moles, warts, and skin tags. For minor skin issues, some herbalists consider the addition of zinc chloride to be overkill. Opt for a gentler formula.

There is no denying bloodroot’s action—repeated application of plain bloodroot powder or paste can burn away a small skin problem over the course of a few weeks. According to Dr. Andrew Weil, bloodroot removes moles in hard to reach places better than surgery, but it must be used with care.

Weil discourages the use of bloodroot for self-treatment of cancer because it may not get all of the malignant tissue.

Bloodroot is a powerful medicine. In animal studies, bloodroot has demonstrated anti-cancer properties. It contains alkaloids that are chemically similar to opium, but with none of the temptations for abuse.

In the late 19th and early 20th centuries, American doctors known as the Eclectics used bloodroot internally in small doses (one to three drops of extract) mostly for bronchitis, cough, and headache. Larger doses were known to cause vertigo, nausea, heart palpitations, skin eruptions, and vomiting.

For most of the 20th century, bloodroot has been used almost exclusively for topical application. Much of the interest was fueled by the controversial healer Harry Hoxsey.

Hoxsey’s bloodroot salve is practically identical to Mohs’s but was developed completely independent of Mohs’s influence. Mohs hit on the value of bloodroot through his work as a research assistant, testing the effects of hundreds of substances. Hoxsey’s formula came from his grandfather, a veterinarian who used a bloodroot and zinc chloride paste to treat horse cancer in the 1800s.

Hoxsey was not a doctor, and he was arrested several dozen times for practicing medicine without a license, but his treatments earned a large and loyal following. His bloodroot paste protocol did not include surgery, but Hoxsey emphasized that patients also take herbal formulas and follow dietary recommendations as a fundamental part of cancer treatment.

In the traditions of Mohs and Hoxsey, most bloodroot salves available today contain large amounts of zinc chloride (as much as 50 percent). Some contain additional herbs, such as galangal, burdock, and red clover. Only a few bloodroot formulas (such as Puremedy’s extra drawing black salve) do not contain zinc oxide.

According to Dr. Ingrid Naiman, author of “Cancer Salves: A Botanical Approach to Treatment,” reactions to bloodroot “can be painful and highly inflammatory.” So those opting to use this treatment must be “well-informed, prepared, resolute, and decisive.”

Although Naiman writes of bloodroot with great respect, she cautions that its effects when combined with zinc chlorideare “violent and unpredictable.” She advises using other herbal treatments first, reserving bloodroot paste as a last resort.

While many report miracle cures using bloodroot salves for skin cancer—where the growth falls off and the hole heals over without a trace—others have experienced significant scarring, tissue damage, and the re-emergence of cancer that requires surgery. In general, the more serious the skin issue and the more aggressive the formula, the more skill that is required to use this medicine safely and effectively.