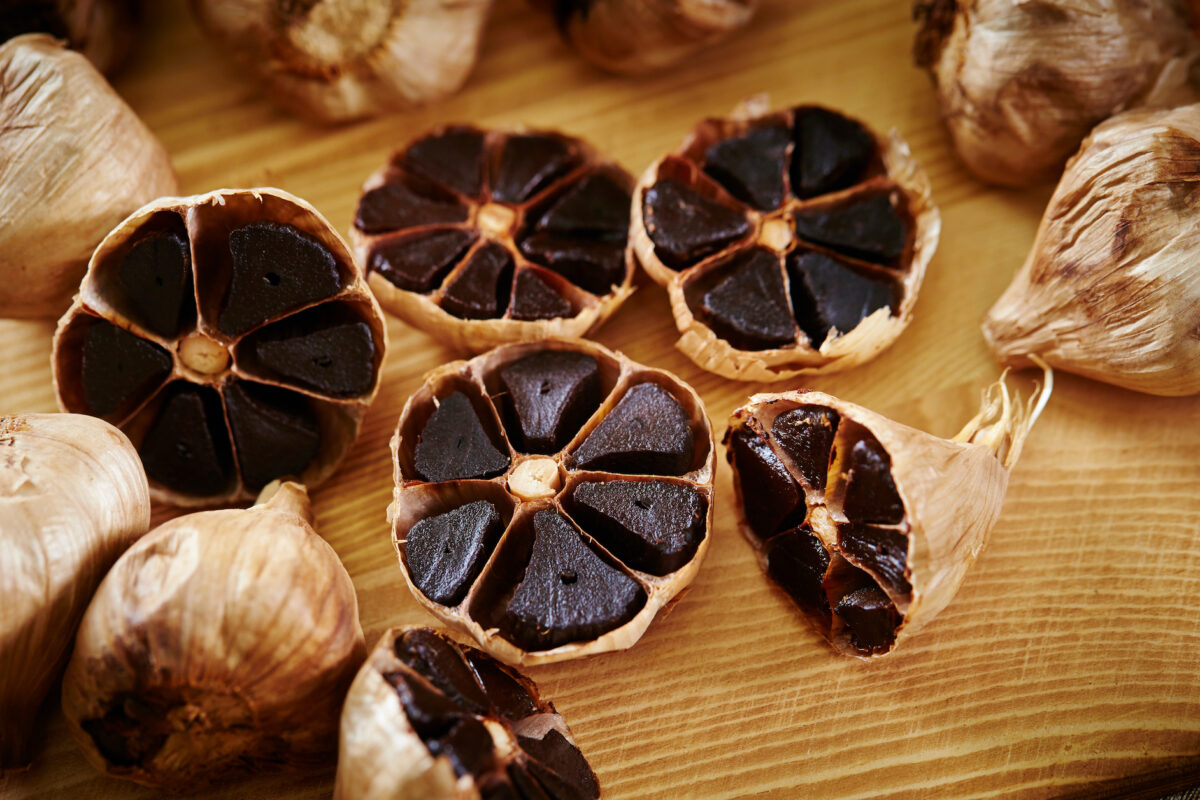 Under the right conditions, garlic can be transformed into something even more powerful
BY Emma Suttie TIMEMay 2, 2022 PRINT

Garlic is a pretty magnificent vegetable. There are few, if any, foods more beloved and present in more kitchens than this bulb.

Garlic is one of the most popular foods on the planet and has been used for centuries by cultures the world over. Cloves of garlic have been found in ancient Greek temples and Egyptian pyramids, including the tomb of King Tutankhamen. Back then, garlic was used not only to enhance the flavor and aroma of meals, but it was also used to increase strength, enhance physical performance, preserve food, and support digestion.

Today, a staggering 250 million (a quarter billion) pounds of garlic are consumed every year in the United States alone. Unfortunately, much of our garlic is coming in from distant lands rather than local growers. China produces 80 percent of the world’s garlic, followed by India, South Korea, Egypt, and Russia.

In addition to its deliciousness, garlic has a long and impressive list of health benefits. Garlic is an antiviral, antibacterial, antifungal, and anti-inflammatory; it boosts the immune system and fights infections, decreases your risk of cancer, and helps protect against cardiovascular problems such as atherosclerosis (a buildup of plaque in the arteries), clotting, high blood pressure, and strokes.

If you think the above list is impressive, just wait. It turns out that if you heat regular garlic in a humidity-controlled environment for 30 days, something extraordinary happens: It unleashes garlic’s little-known secret weapon.

Raw garlic contains minerals such as magnesium, calcium, phosphorus, selenium, and one of the most potent antioxidants in the plant kingdom, allicin. Allicin is only released when the garlic is chewed (not for the faint of heart), cut, or crushed, and you’ll know it because it’s responsible for garlic’s pungent aroma. The problem is that once you crush a clove of garlic and liberate the allicin inside, you have less than an hour before it loses its potency and all the healing benefits that come with it.

But there’s a way to preserve and enhance all of garlic’s health benefits, and amazingly, it’s been used in South Korea, Thailand, and Japan for centuries. It’s called black garlic.

What Is Black Garlic?

Black garlic is simply regular garlic that has gone through a process of fermentation. Chemically referred to as the “Maillard reaction,” the process is biologically quite complex. The garlic bulbs are placed in a humidity-controlled room and heated to approximately 170 degrees Fahrenheit for 30 days. This process causes the sugars in the garlic to caramelize, making it turn its distinctive black color. It also changes the texture and taste. Black garlic has a chewy texture and a sweet balsamic flavor.

However, the most significant transformation is that in its black form, garlic is imbued with not just healing properties but healing superpowers. Interestingly, allicin, the powerful antioxidant in raw garlic, is almost completely destroyed during the heating and aging process of creating black garlic. On the surface, this doesn’t make sense, as allicin is one of garlic’s most potent health-boosting agents.

In a comprehensive review of black garlic’s SAC content, the superior antioxidant effect of black garlic over regular garlic was found to be because of various complex mechanisms that illustrate how robust black garlic’s antioxidant capabilities can be. One of the most beneficial actions of antioxidants is their ability to destroy free radicals in the body. Free radicals are formed from various factors, such as inflammation, exposure to UV light, air pollution, ionizing radiation, pesticides, alcohol, and smoking. Free radicals accelerate aging and have been shown to be a contributing factor to many diseases.

Adding black garlic to your diet or taking a high-quality supplement is worth it for its free-radical fighting antioxidant benefits alone. But black garlic has a host of other impressive healing benefits that more than earn it the title of a ‘superfood.’

Inflammation is the root of many of our most destructive diseases, such as autoimmune diseases, metabolic disorders (diabetes, obesity), and cancer. The S-allyl-cysteine in black garlic is one of the best things you can add to your diet to reduce any inflammation already present and reduce your risk of developing inflammatory diseases in the years to come.

Reduced inflammation also reduces your chances of developing cognitive conditions, such as Alzheimer’s and Parkinson’s diseases, and it can help to improve memory and other cognitive functions.

Looking at several studies, researchers in Taiwan have suggested that black garlic and its bioactive compounds may have a protective effect on the brain and help prevent neurodegenerative disorders and cognitive decline. They published their article in the journal Molecules in 2021.

In another study, black garlic was shown to have a hepatoprotective effect, meaning that it protects the liver from damage, which, in this study, was from chronic alcohol abuse.

Our immune systems are our first line of defense against pathogenic invaders. The allicin in regular garlic is known to be a potent antimicrobial, antibiotic, and antifungal. Still, when that allicin is converted to the S-allyl-cysteine in black garlic, it becomes an even more powerful way to protect the body against viruses, bacteria, and fungal infections such as candida by destroying any such invaders trying to take up residence in our body.

If you have cardiovascular problems—or would like to avoid them—adding black garlic to your diet is probably a good idea. Black garlic has been shown to decrease the risk of cardiovascular problems such as atherosclerosis (plaque in the arteries), clotting, high blood pressure, and stroke. In a study published in Frontiers in Physiology, black garlic improved heart function in patients with coronary artery disease by improving circulating antioxidant levels. The same study also found 27 main compounds in black garlic with strong antioxidant properties.

Another study published in the journal Nutrients found that consumption of black garlic helped reduce blood pressure in subjects with high cholesterol.

Some studies also suggest that black garlic has a cardioprotective effect, protecting the heart from damage.

How to Make Black Garlic

If this is the first time you’re hearing about black garlic, you aren’t alone. Even though it has been used for centuries in many Asian countries, it isn’t common in the West, and it isn’t something that you would typically see at a grocery store.

There was a time about 10 years ago that it became a bit of a trend with high-end chefs, but other than that, it isn’t particularly well known. If you can find it, it costs a pretty penny—upward of $20 a pound.

Of course, if you feel adventurous, you could always try to make it. Although the process of creating black garlic isn’t exactly simple (primarily because of the time involved), it’s possible. I was able to find instructions online for three different ways to make black garlic using either a dehydrator, a slow cooker, or a rice cooker.

A Truly Powerful Food and Medicine

The foods that we eat every day are an opportunity to nourish our bodies, fortify our health, and fight disease. Regular garlic is incredibly versatile—it’s found almost everywhere and is relatively easy to grow; it enhances cooking and encompasses an impressive list of healing benefits from boosting the immune system to cleansing the body of pathogens. It’s a very good thing to have around. If you want to supercharge its healing benefits—which are already pretty spectacular—you can try the recipes for making black garlic, which has all of regular garlic’s benefits and then some.

With uncertainty about the future and a lot of talk recently about food shortages and supply chain issues, gaining some knowledge of common foods and their healing capabilities is only prudent. Being well informed, self-sufficient, and healthy will empower us to face whatever the future may bring.

As Winston Churchill once said: “Healthy citizens are the greatest asset any country can have.”