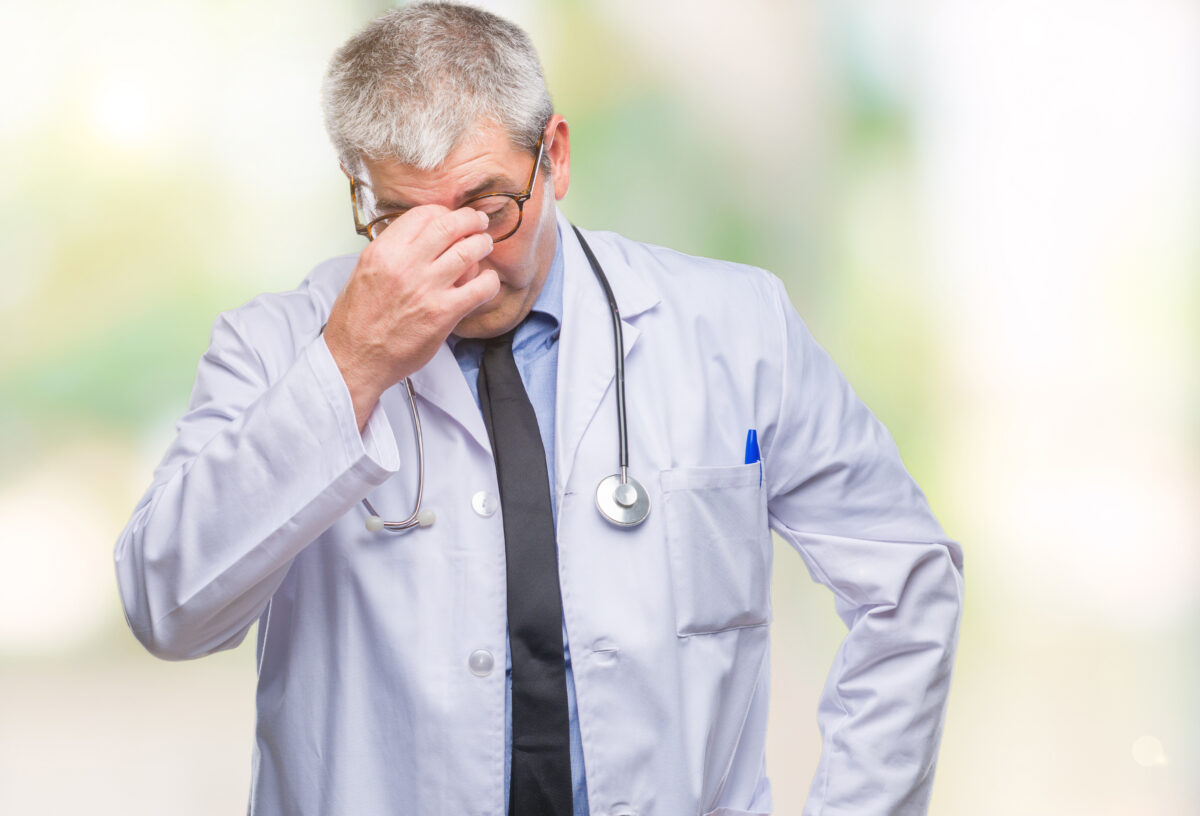 Bill Seeks to Muzzle Doctors Who Tell the Truth About COVID

If these new proposed bills pass, your doctors could have their licenses taken away, simply by speaking the truth about the COVID fiasco. To appease bureaucrats, they would have to censor their thoughts about lockdowns and vaccines, and even avoid advising you about effective treatments.

As reported by Dr. Jay Bhattacharya — professor of health policy at Stanford, research associate at the National Bureau of Economic Research and coauthor of the Great Barrington Declaration, which calls for focused protection of the most vulnerable1 — a California bill is now threatening to strip doctors of their medical licenses if they express medical views that the state does not agree with.2

Bhattacharya has first-hand experience with this kind of witch hunt. He was one of the first to investigate the prevalence of COVID-19 in 2020, and found that by April, the infection was already too prevalent for lockdowns to have any possibility of stopping the spread.

Bhattacharya has called the COVID-19 lockdowns the “biggest public health mistake ever made,”3 stressing that the harms caused have been “absolutely catastrophically devastating,” especially for children and the working class, worldwide.4

To that end, they set out to smear and destroy the reputations of Bhattacharya and the other coauthors of the declaration. In one email, Collins referred to the three highly credentialed and respected scientists as “fringe epidemiologists” and called for a press “takedown” of the trio.6,7,8,9 I detailed this treachery in “Authors of Barrington Declaration Speak Out.”

“Big tech outlets like Facebook and Google followed suit, suppressing our ideas, falsely deeming them ‘misinformation,’” Bhattacharya writes.10 “I started getting calls from reporters asking me why I wanted to ‘let the virus rip,’ when I had proposed nothing of the sort. I was the target of racist attacks and death threats.

Despite the false, defamatory and sometimes frightening attacks, we stood firm. And today many of our positions have been amply vindicated. Yet the soul searching this episode should have caused among public health officials has largely failed to occur. Instead, the lesson seems to be: Dissent at your own risk.

I do not practice medicine — I am a professor specializing in epidemiology and health policy at Stanford Medical School. But many friends who do practice have told me how they have censored their thoughts about COVID lockdowns, vaccines, and recommended treatment to avoid the mob …

This forced scientific groupthink — and the fear and self-censorship they produce — are bad enough. So far, though, the risk has been social and reputational. Now it could become literally career-ending.”

Do You Want Your Doctor To Be Muzzled by the State?

California Assembly Bill 209811 — introduced by Assemblyman Evan Low, a Silicon Valley Democrat, and coauthored by Assembly members Aguiar-Curry, Akilah Weber and Wicks, and Sens. Pan and Wiener — designates “the dissemination or promotion of misinformation or disinformation related to the SARS-CoV-2 coronavirus, or ‘COVID-19,’ as unprofessional conduct” warranting “disciplinary action” that could result in the loss of their medical license.

Misinformation or disinformation related to SARS-CoV-2 includes “false or misleading information regarding the nature and risks of the virus, its prevention and treatment; and the development, safety, and effectiveness of COVID-19 vaccines.” But as far as what might constitute “misinformation” or “disinformation” is unclear and basically left open for interpretation — by the state. As noted by Bhattacharya:12

“Doctors, fearing loss of their livelihoods, will need to hew closely to the government line on COVID science and policy, even if that line does not track the scientific evidence.

After all, until recently, top government science bureaucrats like Dr. Fauci claimed that the idea that COVID came from a Wuhan laboratory was a conspiracy theory, rather than a valid hypothesis that should be open to discussion. The government’s track record on discerning COVID truths is poor.

The bill claims that the spread of misinformation by physicians about the COVID vaccines ‘has weakened public confidence and placed lives at serious risk.’ But how significant is this problem in reality? Over 83% of Californians over the age of 50 are fully vaccinated (including the booster) …

We don’t have to guess at what life might look like if this and other bills like it are implemented, Bhattacharya warns. The drama currently playing out in Shanghai offers a clear look into what can happen when public health is dictated by the state rather than by qualified medical professionals rooted in sound science.

“Shanghai is the model for the terrifying dangers of giving dictatorial powers to public health officials,” Bhattacharya writes.13 “The harrowing situation unfolding there is a testament to the folly of a virus containment strategy that relies on lockdown.

For two weeks, the Chinese government has locked nearly 25 million people in their homes, forcibly separated children from their parents, killed family pets, and limited access to food and life-saving medical care — all to no avail. COVID cases are still rising, yet the delusion of suppressing COVID persists.

In America, many of our officials still have not abandoned their delusions about COVID and the exercise of power this crisis has allowed. As the Shanghai debacle demonstrates, of all the many terrible consequences of our public health response to COVID, the stifling of dissenting scientific viewpoints by the state might be the most dangerous.”

The Science Deniers Are in Power

As stressed by Bhattacharya, the California bill includes a number falsehoods and fails to acknowledge basic science, starting with natural immunity. High-quality studies have repeatedly shown that natural immunity is equivalent or superior to the COVID shots. Were this bill to pass, a California doctor could lose his license for taking a patient’s COVID history into account when recommending the shot.

It also negates doctors’ ability to prescribe off-label drugs for the treatment of COVID, even though this has been a common and uncontroversial medical practice for many decades. It’s not uncommon for a drug intended for one condition to be used off-label for another. But for some reason, when it comes to COVID, this practice is now deemed hazardous and unprofessional.

The bill also falsely asserts that the “safety and efficacy of COVID vaccines have been confirmed through evaluation by the federal Food and Drug Administration.” Anyone who has followed this circus over the past year realizes that the FDA has completely ignored loud and clear warning bells showing the shots are far from safe and nowhere near as effective as initially claimed.

The bill also ignores the fact that the safety depends on the individual patient’s medical history and current state of health. “For example, there is an elevated risk of myocarditis in young men taking the vaccine, especially with the booster,” Bhattacharya notes.14

Doctors have an ethical obligation to treat each patient as an individual, and to ensure each patient receives the safest and best care. Bill 2098 will turn doctors into government agents, leaving no one to advocate for patients’ health.

“The false medical consensus enforced by AB 2098 will lead doctors to censor themselves to avoid government sanction. And it will be their patients, above all, who will be harmed by their silence,” Bhattacharya warns.

California Bill 2098 isn’t the only bill seeking to enshrine tyranny into law. Other pending California bills include:15

“If you are a resident of California, please consider taking the additional step of contacting your respective senators and assembly members in addition to filling out the online portal. See Californians for Medical Freedom for step-by-step instructions on how to contact your local legislators as well as what to say if you decide to call (which is recommended).

The PERK website is also a very helpful way to track the hearing dates and status of these bills. In the comments, Donald Tipon has provided additional links for opposing AB2098 and AB1797 from A Voice for Choice Advocacy.”

Regulating the medical views a doctor can and cannot have is dangerous in the extreme, and hopefully the Californians who are left to vote in that state will quash such efforts. On the national level, we must also stay vigilant against similar legislative proposals, and push back against phony front groups that promote this kind of medical tyranny.

This includes the No License for Disinformation23 (NLFD) group, which promotes the false information disseminated by the dark-money group known as the Center for Countering Digital Hate (CCDH).

As most now know, U.S. Sen. Rand Paul, R-Ky., a medical doctor in his own right, has been the primary challenger of Fauci’s lies, and the NLFD has been instructing individuals to report him to the Kentucky Medical Board, with the aim of getting his medical license revoked.24

Just who are the NLFD?25 In November 2021, I wrote about the NLFD, pointing out that the bottom of their website declared, “Created & Developed by EverydayAmericanJoe.”26 At the time, I took a screenshot of it, in case they’d wise up and change it. Good thing, because that notice has since been deleted.

Originally published May 5, 2022 on Mercola.com