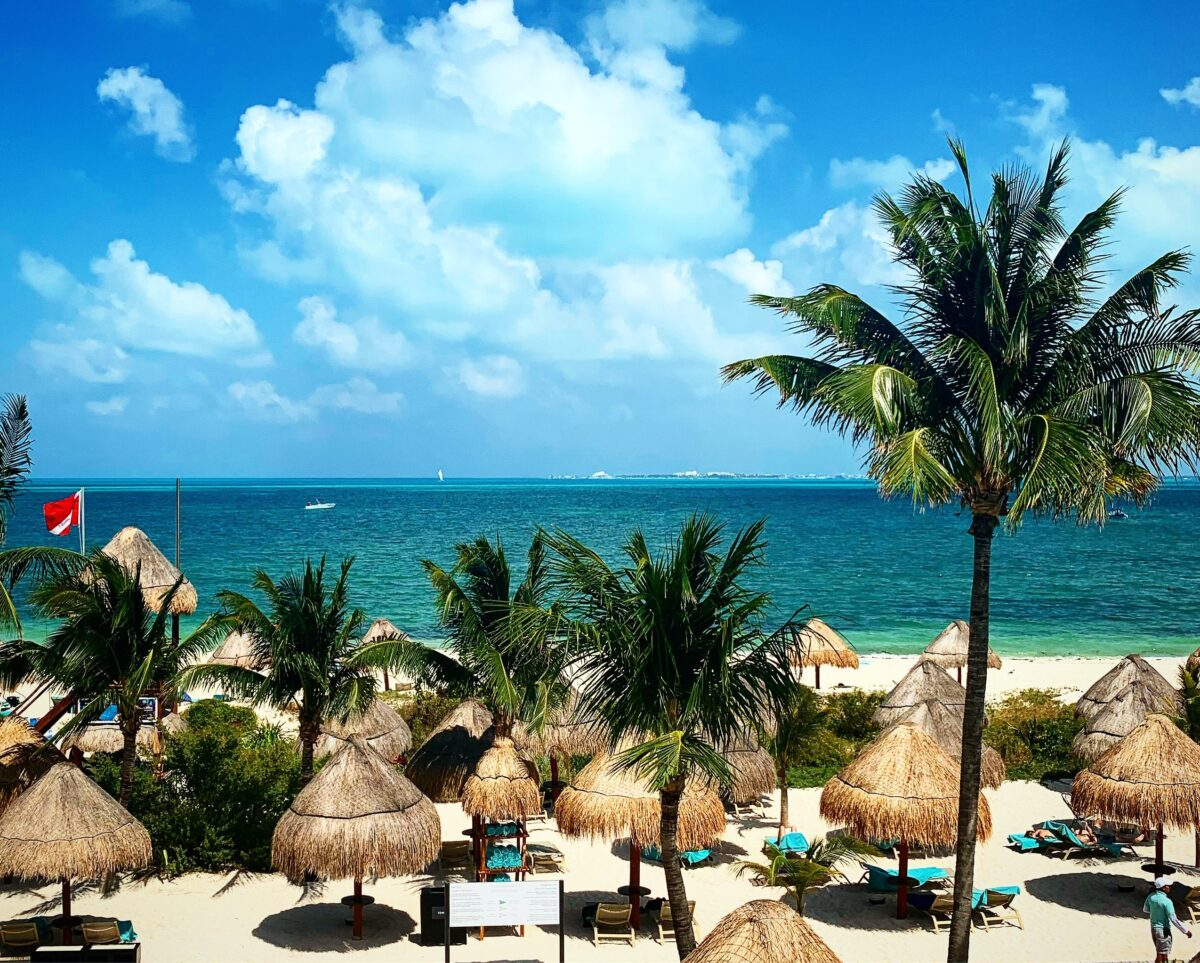 Beyond the Beach: Cancun and the Mayan Riviera

Boarding the ferry and climbing the narrow stairs to the top level, the cheap plastic seats bathed in the hot sun and swept with warm Caribbean winds started to fill quickly. Behind, the white and glassy towers of the hotel zone rise and to each side of the boat, was a sea that turns all shades of green and blue. And ahead was an island that’s a world away, although it took only 30 minutes to make the crossing.

But first, there was a little music. As we cast lines and pulled away from the dock, a man dressed like he’s been separated from his mariachi band walked to the front of the deck, fiddling with a couple of speakers and picking up a microphone, the sun shimmering off his huge, reflective belt buckle. Then, the crooning began. A love song? Sounded like it, although everything—the singing and the accompanying commentary—was entirely in Spanish.

It didn’t matter that he had a captive audience. The man still put his everything into the performance, pouring it all out on that stage, hitting all of the notes in his register (and a few that weren’t), moving back and forth to bring the ballad to both sides of the boat. When we started to undulate a little in the waves, he stumbled and made a joke that I didn’t understand. However, I recognized the word “tequila,” so maybe it was a comment that he had drank a little too much. It was a perfectly fun, quirky moment—and one you’ll only encounter if you venture out from your resort to explore Mexico.

I was on my way from Cancun to Isla Mujeres on Mexico’s Yucatán Peninsula, which beckons those seeking a little warmth from across northern climes every winter. Many will arrive at the beach and just stay there. There’s nothing wrong with just soaking up the sun and maybe a few margaritas for a week or two. But those who look just a little further beyond in the Riviera Maya will be rewarded with local charm, ancient wonders, and some very good food.

Take Isla Mujeres for example. The place is by no means a secret destination, but the feel is entirely different from Cancun. Literally meaning “island of women,” it’s long and thin, stretching about four miles and separating the Caribbean Sea and the Gulf of Mexico about eight miles off the mainland coast. The primary mode of transportation on the island is golf carts. The beaches are broad, with views back to the skyline and big resorts of Cancun. The feel is bohemian, people lunching on tamales and burritos at little beach bars shaded under thatched palapas, then sprawling on loungers or in hammocks nearby.

I walked around the northern tip of the island for a couple of hours, following the bathing-suit-clad throngs of people and the smell of coconut shrimp to the beach. After digging my toes into the sand, I doubled back through the main town. There, a pedestrian shopping street is much quieter, lined with shops, food stalls, and sidewalk cafes. I popped into a few stores, then enjoyed a cool drink, people-watching for a little while.

And not far from the resorts, you’ll find ancient wonders as well. Once, the Yucatán was the heart of the sophisticated Maya civilization. The first Maya cities date back to 750 B.C., which became city-states with a complex trading network starting at about A.D. 250. The kingdom lasted until the 17th century. The ruins left behind by thousand-year-old cities are impressive, with towering pyramids and observatories that demonstrate advanced knowledge of the cosmos. The Maya still inhabit this part of Mexico, and their cultural legacy remains part of the day-to-day fabric in the region.

Spanish colonizers named Isla Mujeres for the many images of Maya goddesses that they found there, and the remains of a small temple still sit on the southern end of the island. From Cancun, a popular day trip takes travelers to Chichen Itza, which became one of the largest Maya cities between A.D. 600. and A.D. 1200. Now a UNESCO World Heritage Site, the site blends architectural styles, and you can tour it from the iconic El Castillo (a temple to the feathered serpent god, Kukulcan) to the House of Eagles, Jaguar Temple, and the Great Ball Court, where teams played a traditional game known as pok-a-tok. It wasn’t a casual affair played on a Saturday afternoon, but more of a battle—the losing team was usually killed.

Or you could head south to Tulum, where the Maya ruins sit right next to the Caribbean. One of the last cities in the kingdom, its height and influence lasted into the 15th century. Riding about two hours south of Cancun in a taxi along a fast, four-lane highway, I found a sort of boomtown. The modern city that’s grown up next to the archaeological site is vibrant, dynamic, and very tropical, feeling like the entire place just sprung up in the jungle a few years ago. It was still a sleepy beach town until the 1990s. Today, it’s home to more than 45,000 people.

With only a couple of days in town, my schedule was busy. I chomped gourmet burritos and browsed big tequila stores in the heart of town, toured the beach bars and restaurants all along the coast, and made plans to swim in the nearby freshwater lagoons and cenotes (the latter are natural sinkholes in the limestone that dot the Yucatán, filled with cold, clear water). And I ran out of town—just too much to do. Leaving town, I placed in my pocket a list of things I needed to do, see, and eat when I return. Soon.

Fly: Cancun International Airport, awarded the best airport in Latin America and the Caribbean, welcomes frequent, nonstop flights from all around the world, including a number of major U.S. hubs, such as New York, Los Angeles, Miami, Dallas, and others.

Getting Around: Within towns and cities, taxis will take you anywhere, including up and down the coast, for the right price. Otherwise, ADO buses are a safe, clean, and inexpensive option to travel between cities and towns, and organized tours will take you to major attractions.

Stay: In Cancun and further down the coast near Playa del Carmen, two Hard Rock Hotel resorts provide a high-end all-inclusive experience with a bit more rhythm. Live shows reprise the sounds of rock royalty, music is always playing throughout the property, and, for some room categories, “personal assistants” will help you make plans and organize your days, whether they’re spent on property or throughout the Yucatán.

Take Note: With a show in a beautiful, purpose-built Teatro Vidanta, Cirque du Soleil’s “Joya” brings together whimsy, artistry, and almost unbelievable human feats. Their champagne dinner package includes a lovely meal that integrates elements of the show and live entertainment while you dine, before the main attraction begins.