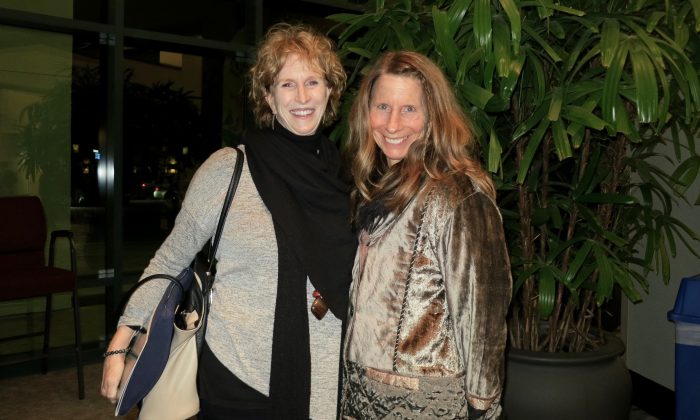 NORTH CHARLESTON, S.C.—On the corner of South Market and East Bay in the Charleston City Market sits A World Apart, a shop run by Philip and Kim Przyborowski, born of a love for cultures. It was in the shop, filled with furniture, dresses, and accessories crafted with the good energy of the blessed Bali island, that Mrs. Przyborowski learned of the divinely inspired Chinese culture brought alive by Shen Yun Performing Arts.

A young woman had come into Mrs. Przyborowski’s shop asking to put up a Shen Yun poster, and they spoke for a time. Established in 2006, the New York-based company has made it its mission to revive the authentic traditional Chinese culture through music and dance.

Mrs. Przyborowski was so moved by the young woman’s telling of the story that she just said, “I’m going to call my best friend and we’re going to go see this.”

On Jan. 26, Mrs. Przyborowski and her best friend Jeanne Barreira said at the North Charleston Performing Arts Center that Shen Yun had lived up to every expectation they had. The best friends were wowed by the spectacle and moved by the universal truths they said they said they saw in Shen Yun.

The visuals created by the costumes, props, and backgrounds were so realistic, and everything was so capitvating, Mrs. Przyborowski said. And it had brought the story of an ancient culture to life.

“Those are incredible beautiful words to guide your life by. It’s a reminder for all of use here,” Ms. Barreira said. They are “the universal truths.”

The emcees explained that such principles, rooted in traditional Chinese beliefs, are alive in today in the spiritual practice Falun Gong. However, in China today, the traditional culture and beliefs, as well as this spiritual practice, have been banned by the communist regime. In one dance, Shen Yun tells the story of practitioners of Falun Gong.

Ms. Barreira said it made her feel grateful—for the words, for her freedoms, being able to speak her truth.

“When people come and they present it in a way that we can really feel it, the music and the emotion, allows us to feel some of what, maybe, a little bit of what they feel,” she said.

Ms. Barreira was also grateful for the work and collaboration Shen Yun’s artists must have put in to bring the culture to the world. “The commitment is huge! It must be.”

“It’s like they worked so hard. This is their life, and so dedicated to sharing their stories with us here, I guess around the world,” she said. “To really share some of the truth of the Chinese, where they can’t do it in their own homes.”

“This is really a beautiful way, a loving way, to share it with us here in America,” Ms. Barreira said.