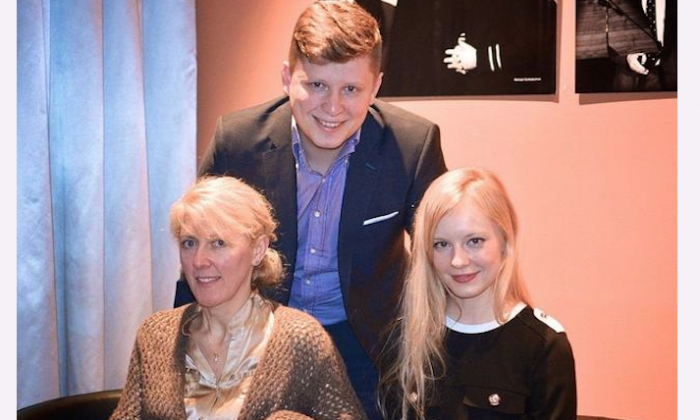 BERLIN—The Tuesday evening performance by the New York-based Shen Yun Performing Arts artists was very well received. Hosting the show was the Stage Theater am Potsdamer Platz, a venue that with its 1,800 seats the largest theater in Germany. Worth mentioning is also that the theater that opened in 1999 is located at a place where the Berlin Wall stood.

Ms. Viktoria Gossmann, the wife of Mr. Andre Gossmann, president of Gossman Gebaudereinigung in Berlin, presented her husband tickets to Shen Yun . They naturally included their daughter Minna in this outing.

Mr. Gossmann said during intermission, “It was very colorful, and I truly enjoyed this part of the performance … I saw so many dancers on stage, approximately 20, and yet their movements were so in sync. It was very interesting to see classical Chinese dance for the first time on stage.”

Mr. Tim Felder, a political scientist and report for labor union medias said, “this is the first time I saw a Chinese performance.”

He recommends the show to his friends and acquaintances, “But, they should be surprised by what they see and let everything just sink in. This way the end effect would be the best. That is exactly how I experienced the show.”

Two ladies, Ms. Helga Roske and Ms. Adelheid Berndt-Braganca, a pharmacist, were old hands at watching Shen Yun. Ms. Roske was seeing the show for the second time and her friend Ms. Berndt-Braganca was seeing it for the third time.

Ms. Roske said, speaking of the erhu, a two-stringed Chinese violin, “The sound of the two-stringed instrument was unbelievable.”

“I felt connected to the show. Therefore, this evening ended on a very interesting tone and it was a wonderful and memorable evening … I will have to think for a long time over what I have seen today,” he said.

Reporting by NTD and Heide B. Malhotra