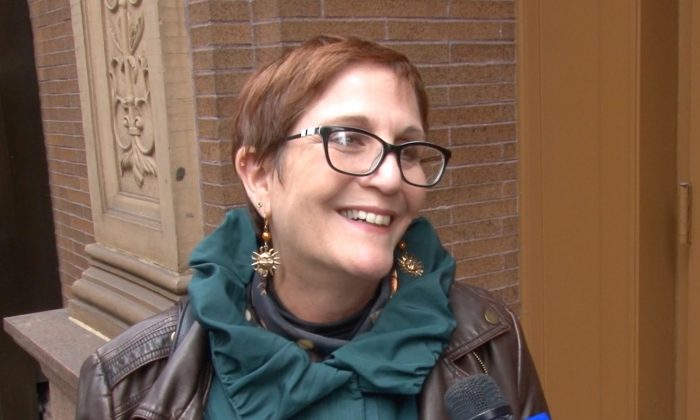 NEW YORK—Hailing from Easton, Pennsylvania, Ms. Elizabeth Pecota, a musician who plays the flute and harp, came to Manhattan to attend Shen Yun Symphony Orchestra’s performance at Carnegie Hall on the afternoon of Oct. 11. The experience was one that had her crying “at least ten times.”

Ms. Pecota said that she wept for the beauty of the performance. “It enriches my life.”

“It was very moving, exciting but moving, and it just moved me to tears.”

“I loved the way they mixed the East and the West together, I loved the trumpet pieces, the vocalists were superb, the music was varied and rich and covered all types of styles, it was just wonderful,” Ms. Pecota said.

Chinese traditional music is diverse and has varied greatly in style from dynasty to dynasty throughout the ages. China’s 50 ethnic groups have also brought their own variations to the music.

Composer, Junyi Tan explains in a video on the Shen Yun website that Northeastern music tends to favor the suona, a woodwind instrument. South of the Yangtze River, they favor the pipa (Chinese lute). Mongolians use a lot of vibrato, a musical effect consisting of a regular, pulsating change of pitch.

Shen Yun Symphony Orchestra performs from a vast repertoire of original works adapted from Shen Yun Performing Arts dances, such as “Grand Descent of the Deities,” “The Warriors of Wudang Mountain,” and “The Steadfast Lotus.” The 2014 concert also pays tribute to celebrated Western classics by composers like Antonin Dvorak and Mikhail Glinka. Shen Yun Performing Arts is a New York-based company with a mission to revive 5,000 years of Chinese culture, a culture believed to be divinely inspired.

Ms. Pecota was impressed with the high quality of the Orchestra’s performance, which she described as “top-notch.”