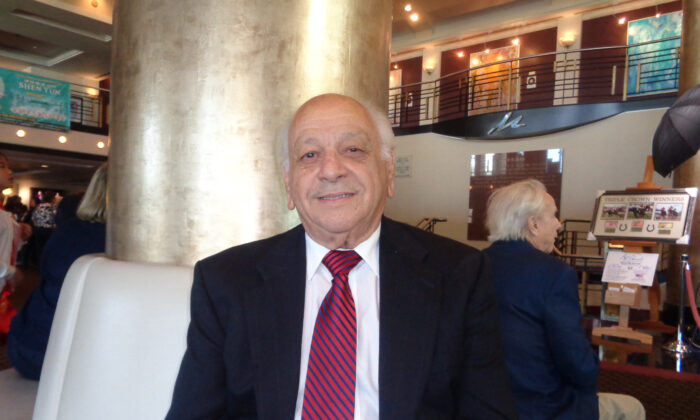 ST. PETERSBURG, Fla.—Shen Yun Performing Arts was more than just an introduction to classical Chinese dance for retired businessman Peter Monopoli, it was an expression of beauty, freedom, and faith.

He and his wife RoseAnn enjoyed a much-awaited performance by the New York-based dance and music company. Though the culture they were introduced to was ancient and foreign, they left with a renewed appreciation for the traditional Chinese culture as well as their American freedoms.

“I thought it was excellent. It was very sensational, very colorful, very different,” said Monopoli, who owned several businesses before he retired.

He enjoyed the stories and scenes that spanned 5,000 years into the past, and the innovative technology of the digital backdrop that helped bring them to life.

“The way they did that was really interesting—it looked like it was real,” Monopoli said.

He enjoyed the tales and legends, as well as more overarching themes like faith, as China’s culture was once said to be divinely inspired. As Shen Yun’s website explains, Buddhism, Taoism, and Confucianism were cornerstones of civilization, hence the spirituality that permeated every aspect of life.

Learning that Shen Yun cannot perform in China, where the ruling communist regime is opposed to the traditional culture, Monopoli felt it was sad, but took hope and joy in the stories and themes Shen Yun presented as a revival.

“That was a sad part, to know that in some part of the world the tremendous great country as big as China had that kind of persecution among its own people,” Monopoli said. He saw in the performance the beauty of the countryside in the various ethnic and folk dance vignettes, and the heart of the people.

“Here in America we have the freedom,” he said. “We should be thankful for all God has given us.”

Also in the audience was the Cook family, who found the stories inspirational and the art well executed as they took in Shen Yun at the Mahaffey Theater on Saturday afternoon.

“I thought it was very well done, and they had some very good production value to it,” said Jeff. “I particularly like the colors, the vibrant look of it, and the variety—a lot of multiple dancing, and there were some individual things, so it was nice to have a wide range of things.”

Christina added that the multimedia of the background combined with the music and dance was wonderfully done, and it was also a learning experience for the whole family.

Jeff was impressed with how Shen Yun brought up both the good and evil in history in its dance mini-dramas.

“There is a lot of history,” Jeff said. “There’s a lot of culture and a lot [of] good things and bad things that we have to deal with, and there’s a lot of things that kind of go unspoken, but kind of expressed in what they showed here. It was done very tastefully, which I found inspirational.”

For instance, the traditional culture Shen Yun seeks to revive as part of its mission is suppressed under China’s communist regime. Jeff was impressed that this colorful and inspiring performance touched on this issue, communicating it in a clear visual way, without being negative.

“It can be challenging, but also understanding that from the people’s perspective, there’s always a struggle but there’s always a positive side to it and trying to look for the better things in life,” he said.

One aspect of hope in these stories is the people’s faith, the depiction in which Jeff found universal elements.

“It’s something to look on to and believe in,” he said, regardless of which religion you believe.

With reporting by Yawen Hung and Linda Lee.