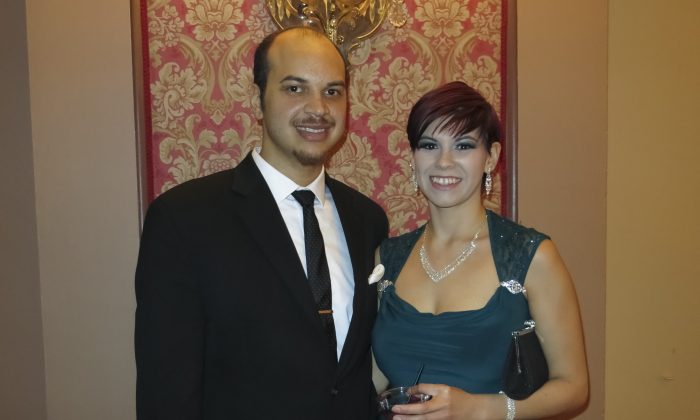 CLEVELAND—On a routine basis, Sally Suarez deals with things that accentuate beauty, yet the beauty of Shen Yun Performing Arts Touring Company was overwhelming to her.

“It’s so beautiful. It’s artistic and the intricacies and the detail, so elegant,” said Ms. Suarez who is a store manager of a Claire’s, a store that specializes in beauty accessories.

Josh Andrews, assistant store manager of a Lids, accompanied her to the performance at the State Theatre on Jan 30. He was equally impressed with the 5,000 years of China’s divinely inspired culture he saw on stage.

Ms. Suarez felt here was an exactitude in the artistry. “There’s precision and everyone’s in sync, but there is still personality to it, and it comes through,” she said. “Everyone looks like they’re passionate about what they’re doing.”

One of the dances that stood out for Mr. Andrews was “The Steadfast Heart.” It is a contemporary piece that depicts a couple who are persecuted for practicing a traditional meditation practice called Falun Dafa. Mr. Andrews pointed out that the couple portrayed in the dance stood up for what they believed in despite being assaulted.

Shen Yun’s mission is to revitalize the traditional culture that was almost completely decimated due to the 60-plus years of communist rule.

It is this culture that touched them both deeply. “It’s very memorable. It really hits you,” said Mr. Andrews. He also described the culture as magical, very emotional, and very beautiful.

Ms. Suarez felt there was an intensity, an energy, to the spiritual nature of the traditional culture even though they do not observe any kind of faith.

From Mr. Andrews’s perspective, he saw the power behind Shen Yun in staying true to its heritage.