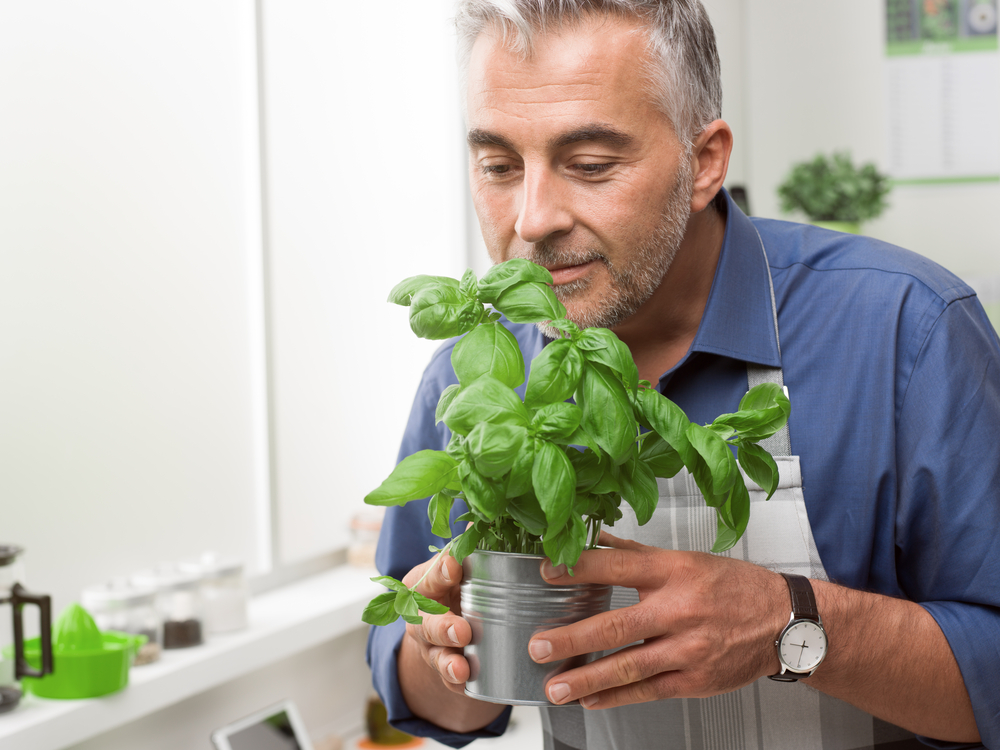 Basil, has many uses both inside and outside the kitchen. From essential oils that can be used to keep certain pests away to herbal remedies dating back centuries. (Shutterstock)
Food as Medicine

For most Americans, the scent of basil usually means Italian food. But this herb is good for much more than just pasta.

Basil seems to have always been an herb symbolizing extreme opposites, such as love and hate, royalty and poverty. In Medieval Europe, basil was serious magic, believed to both cause and cure evil.

Since the oldest written records, basil was associated with creepy-crawly things such as snakes and lice—but especially scorpions. In the Middle Ages, scorpions and worms were widely believed to be conjured from basil leaves. In the 1500s, doctors of the day warned that merely smelling basil would breed “scorpions of the mind.”

It’s strange that a plant with such a vile reputation would also be called the “king of herbs,” but many ancient cultures treated this plant with great reverence. In India, basil was associated with two of the highest gods in the Hindu pantheon, Krishna and Vishnu.

Christians dubbed basil St. Joseph’s Wort, in reference to the earthly father of Jesus. In Bulgarian and Catalan folklore, the smell of basil is identified as the medium for impregnating the Virgin Mary.

Ancient cultures used basil for many health issues. In traditional Chinese medicine, basil is used to remove heat and toxins trapped deep in the body.

Basically, basil clears obstacles and gets things moving again. Any internal organ experiencing congestion and stagnation seems to benefit from it. One of the most common applications for basil is to treat lung problems such as asthma, cough, and chronic bronchitis. It also promotes menstruation and helps with the birthing process, relieves gas, and improves circulation.

Basil comes in a variety of colors and flavors. There may be more than 50 different cultivars, but ongoing disputes among botanists make it hard to draw clear lines.

All basils are fragrant, with a distinct clove and floral quality that is unique to this herb. Americans mostly know the typical Italian sweet basil, but the varieties favored in Asia tend to be spicier. Collectively known as Thai basils, these Asian varieties have stiffer, pointier leaves. Some are green, others purple.

One of the Thai basil varieties getting a lot of attention now is called holy basil or tulsi (the name of a Hindu goddess honored for her faithfulness, and a Sanskrit word meaning “the incomparable one.”)

As the name suggests, holy basil is held in high esteem in Ayurvedic medicine. This herb is used to treat many of the same ailments that Europeans use the sweet variety for, and then some.

Modern herbalists consider holy basil an adaptogen—an herb that helps the body better cope with stress and aging. Holy basil is best known for treating issues associated with adrenal health, such as regulating the sleep cycle, improving fertility and immunity, and invigorating the chronically exhausted.

Like the sweet basil of Europe, holy basil frees stuck energy in all the organ systems—even the brain. It is traditionally used to both relax and stimulate the mind. It relieves stress and insomnia, and also promotes clear, focused thinking. The University of Maryland Medical Center recommends holy basil for PTSD.

According to herbalist Matthew Wood, basil also helps rid the body of pharmaceutical drug residues too.

Some believe that holy basil may give marijuana some non-psychoactive competition. Chemical similarities in both plants suggest that Holy basil can effectively treat many of the same issues for which people use medicinal marijuana, but without the high.

Basil has been traditionally used for pain, and research suggests this herb may be just as effective as many modern drugs. The source of basil’s pain-relieving abilities is its essential oil, which exhibits the same anti-inflammatory, COX enzyme-inhibiting properties as aspirin and ibuprofen. For those who suffer from arthritis or other chronic pain, generous amounts of basil may be a wise addition to the diet.

Those concerned about food-borne illness would also benefit from regular basil consumption. Basil has been traditionally used to repel insects and soothe bug bites (particularly scorpions), but this herb may also be used against microscopic bugs as well. Components in basil essential oil have been shown to inhibit a wide range of bacteria, including strains that have developed significant resistance to antibiotic drugs.

A 2004 study from the journal Food Microbiology found that washing produce in a diluted concentration (1 percent) of either basil or thyme oil could fend off bacteria known to cause diarrhea and stomach cramps.

Since much of basil’s medicinal punch comes from essential oil, it’s important to make preparations that preserve it. Heat dissipates essential oils, so add basil at the very end of the cooking process, just before serving.

When making a basil tea (which is especially welcome for headaches and sore eyes), cover the pot to prevent the volatile oils from escaping. Once the water comes to a boil, turn off the heat before you add your basil leaves and immediately put a lid on it. Steep covered for at least 20 minutes before straining.

For both flavor and medicine, fresh herbs are best, but since basil requires a warm climate, it can be hard to have enough on hand all year round. Freezing is a worthwhile method of preservation. Combine fresh chopped basil with olive oil and pour the mixture into ice cube trays to make convenient portions for later use.

Dried leaves can still retain much of their essential oil if prepared and stored properly. But remember that the fresh, herbal fragrance is what makes basil so great. If dry leaves no longer have a scent, toss them. The good stuff is gone.

A tincture is the preferred choice if you want a basil supplement because the alcohol helps preserve the essential oil. Capsules are fine too, but they may not stay as potent for long after opening the bottle. You can also buy straight basil essential oil and dilute it for topical application. Do not use straight oil internally unless working with a well-trained aromatherapist.

Some of basil’s medicinal benefits are immediate, but others take time to manifest, especially if you’re using it for chronic pain, adrenal imbalance, or blood sugar issues. It may take a few weeks or even months of regular doses before you notice a profound change.

A typical dose ranges from about 300 milligrams to 600 milligrams a day and is considered very safe. Consult a qualified herbalist for best results.

In northern Italy, a man who accepts basil from a woman is believed to remain faithful. In ancient Greece, a symbol for poverty was a woman looking at a basil plant.

Basil has been cultivated across Asia and Africa at least 5,000 years. Alexander the Great was said to have brought basil to Greece in about 300 B.C.

In ancient Rome, it was believed that the more harshly one cursed their basil seeds before sowing, the stronger the seedlings.

Basil is brimming with powerful phytochemicals and nutrients. It’s low in calories and high in beta carotene, vitamins A and C, and other antioxidants. It is also considered a good source of zinc, iron, and protein.

Promising preliminary research shows that some phytochemicals in basil may help with cervical, prostate, and breast cancers. Other studies show that basil may be useful for diabetes, high cholesterol levels, heavy metal poisoning, radiation sickness, and cataracts.