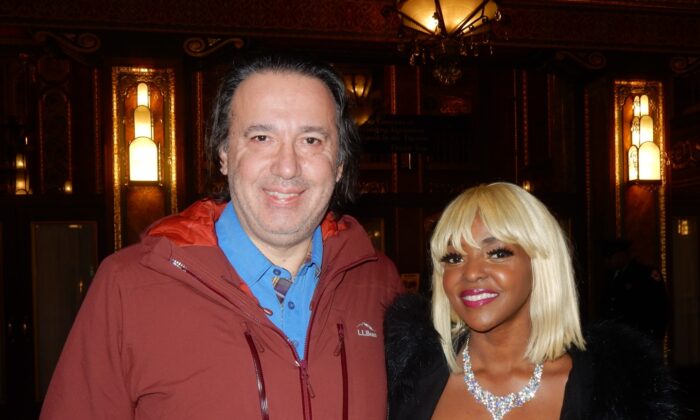 PROVIDENCE, Rhode Island—Can a live orchestra miraculously appear where there wasn’t one before? Listening to classical musicians Eve and Alex Pappas describe their experience at Shen Yun Performing Arts, one could almost say so.

“In the beginning, we thought maybe it was pre-[recorded], we didn’t realize that there was actually an orchestra there. That’s how great it sounded. And when we realized it was actually performing there, we just couldn’t believe. It was beautiful!” said Alex, who plays Baroque classical music in New England with his wife, a multi-instrumentalist, (Eve) Yvonne Makilya Pappas. The pair attended New York-based Shen Yun at the Providence Performing Arts Center on Jan. 19, 2020.

“Top notch! Something that you would see at … a palace. It was just wonderful.”
— Yvonne Makilya Pappas

“Everything was just absolutely exquisite,” Eve said. “Top notch! Something that you would see at … a palace. It was just wonderful.”

Shen Yun seeks to revive ancient China’s traditional culture and share it with the world through exquisite art forms such as highly-expressive classical Chinese dance. Every year, it sends seven touring groups around the world, each with its own orchestra uniquely comprised of Chinese and Western instruments.

“I’m a classical musician myself. So I can really see the decorative [aspects] and the professionalism to it. It just looks like years and years of practice and I just absolutely loved it,” Eve said. “I would recommend this for anyone. It was so uplifting. It’s great for all ages, and Oh … it was the best thing I did for 2020!”

The essence of ancient China was its spirituality, which forms a key theme in Shen Yun’s storytelling dances. This combination of dance, music, and divine culture received a warm welcome from the Pappas.

“We think it’s very exquisite, … it included everybody. It showed how we’re all divine and how the earth can be a very beautiful, magical place and it was just, it was almost like a combination of … everything wonderful you could ever think of,” Eve said.

“The lyrics were beautiful, very moving,” she continued. “The bass had a magical voice and the tenor had a magical voice, too. The pianist was exquisite. We absolutely value them and enjoyed that. And I hope that the next show they’re just gonna keep coming and playing music for us. We’d love to have more.”

One of the show’s messages, according to Alex is “the different cultures and the different territories, everybody comes together and can enjoy music and dance and art. … It´s beautiful.”

To Shen Yun’s conductor, choreographer, artistic director and all of the artists, the Pappas has warm words of thanks and encouragement.

“Thank you so much and just keep sharing your beauty and who you are inside. And each of them have such a magical place in our hearts. And I know we’re not related in culture, but we are related through music and art. We love them all so, so much,” Eve said.

With reporting by Wei Yong and Brett Featherstone.