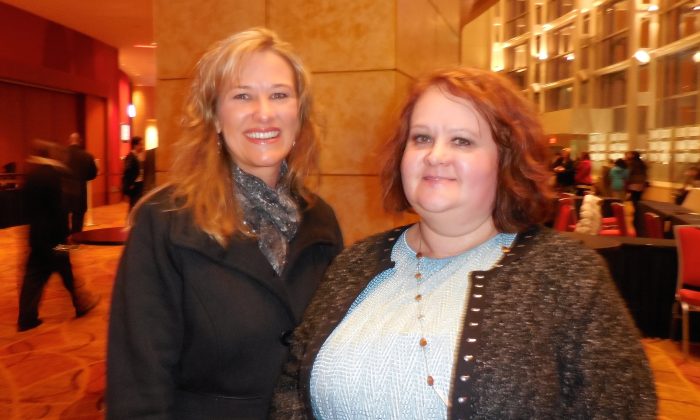 ATLANTA—Ammie Elliot, a banker, came to see Shen Yun Performing Arts on Jan. 2 with a large group, including several teenagers. While members of her party took turns posing for pictures in front of a large Shen Yun banner, she stood aside and shared about her experience watching Shen Yun along with one of her companions Suzanne Girone.

“I thought it was fantastic. I was really, really impressed with the performances altogether,” said Ms. Elliot.

I thought the performance on the solo performance, with the instrument, was just fantastic.
— Ammie Elliot, a banker
The audience was responsive throughout the evening; they responded particularly with great enthusiasm to the music. After Xiaochun Qi gave an erhu solo, “All for Today,” people stomped and whistled and applauded. At the end, when Ms. Qi came onstage for the curtain call, and the conductor gestured to the orchestra as a whole, the audience leaped to its feet and gave an explosive standing ovation.

“I thought the performance on the solo performance, with the instrument, was just fantastic,” said Ms. Elliott. According to the master of ceremonies, the two-stringed erhu can be as expressive as the human voice.

For her friend, the dance evoked memories of her earlier life and a wish to revive an old love. “I’m a big fan of dance … so now I wish I could still do it. I used to do gymnastics, so it was really enjoyable to me. I wish I could still do that today,” said Ms. Girone. She works for a non-profit, Friends of Disabled Adults and Children, which gives medical equipment to people with disabilities.

Ms. Girone said she wanted to take home one of the weighted handkerchiefs used in Handkerchief Blossoms, a folk dance in a style from Northeastern China. According to the program, the dancers spin pink handkerchiefs, symbols of plum blossoms and the coming arrival of spring. “I like the one with the spinning, the plum flowers. I thought, I wish I would have one of those to take home and try it.”